Unlike the other Athlon CPUs used as the main comparison points in this test, the X4 845 is not overtly designed for overclocking. It lacks the extra ‘K’ in its name, meaning that the CPU has a maximum limited multiplier, and the only way to adjust the frequency above the rated box speed is by adjusting the base frequency (100 MHz at default). We’ve detailed base frequency overclocking in a number of pieces in the past, both on AMD and Intel (such as the recent i3 overclocking debate), and there are a number of issues to consider.

Depending on the design of the platform, adjusting the base frequency has a knock on affect with a number of sub-systems. Typically speaking, adjusting the base frequency automatically adjusts the DRAM speeds as well, which would need to have its multiplier reduced to stay at its intended data rate. Adjusting the base frequency can also affect the chipset or PCIe lanes, pushing them out of specifications and leading to transmission errors due to the signal-to-noise ratio becoming worse, leading to corrupt data. Beyond this, as increasing the base frequency has these knock on effects, in some instances the voltage of these other components needs to be increased to compensate. It becomes a juggling act between frequency, voltage, temperature and stability very quickly. Despite this, some platforms can do it very well by implementing separate clock speed generators and compensation mechanisms, while others not so much – it depends on the design. Then there is the added factor of how close the processor is to the limit of overclocking to begin with.

At the top of this article we discussed the design for the Athlon X4 845. At its heart, using the Excavator microarchitecture and Carrizo cores, this is a processor that was originally designed for a laptop but placed into a desktop processor’s clothing. The design target for the family of processors was 15W total, and when you design a CPU to a certain power budget, there are compromises/techniques that can be done to make it more efficient at the target power rating. As you move away from that rating, either by frequency or voltage, the efficiency decreases. If you decrease it too much, you may find that at a given frequency, the performance or efficiency of the processor can be bested by an older generation part with a higher target power window – in this case, AMD’s slides suggested that a 35W Kaveri and a 35W Carrizo part would have similar efficiency characteristics. The Athlon X4 845 is a 65W processor, blowing past the 35W match up, but is only a couple of hundred MHz behind the X4 880K to begin with.

Being designed for 15W and running at 65W would typically be a problem – being so far outside the standard design window most likely means that the CPU is near the physical limit of what is possible for headroom and, depending on the voltage/frequency curve of the processor, could result in it being very warm. Nonetheless, we took a sledgehammer to crack an egg with our standard overclocking tests.

Our standard overclocking methodology is as follows. For manual overclocks, based on the information gathered from previous testing, starts off at a nominal voltage and CPU frequency, and the base frequency is increased in steps of 5 MHz until the stability tests are failed. The CPU voltage is increased gradually until the stability tests are passed, and the process repeated until the motherboard reduces the multiplier automatically (due to safety protocol) or the CPU temperature reaches a stupidly high level (100ºC+). Our test bed is not in a case, which should push overclocks higher with fresher (cooler) air.

The testing software implements a single POV-Ray benchmark run, which typically catches memory errors or extreme CPU errors, and a five-minute blast of OCCT, which alternates between heavy and AVX loading. This should catch mathematical errors caused by low voltages.

To avoid confusion, I meant to put 'Insert Failure Here' at this point. It was a failure.

To go into a bit of my overclocking history, I’ve participated in local and global overclocking contests with a modicum of success, at one point reaching #2 in the world (if only for 36 hours or so) and coming runner-up in a couple of contests. It was my major hobby for a good period as a post-graduate, trying to extract the last bit of performance on a system that only needed to be stable enough to run the benchmark. But here, the Athlon X4 845 was not playing ball.

Going up in stages, overclocking to 120 MHz (35*120 = 4.2 GHz) went reasonably well, if only because voltage was being pumped in at a good rate and temperatures were approaching the high 80s. The memory was being adjusted accordingly to keep it around 2133 MHz. Moving higher than this was tough while still being reasonable with temperature - 121 MHz seemed to be a limit that passed the overclocking tests, but when I went for a benchmark run, it spectacularly failed during the benchmark script several times, even when the voltage was pumped up more.

I dialed the frequency back to 115, to see if it was just something odd, and the CPU also failed at this frequency, even though it had been stable before. I played around the voltage, both using what had passed at that level before and some more to ensure stability, but the gaming benchmarks were failing and a number of the CPU tests didn’t want to output results (or reasonable results). At 110 MHz, or 3.8 GHz for a measly 10% overclock, more CPU tests passed but still the GPU tests were failing.

So despite the stock frequency being absolutely fine, our CPU sample is pretty much a dud for overclocking. I really wanted to have a good 4 GHz stable to do some comparisons and scaling, but nothing really wanted to play ball for more than a few basic benchmarks. We did get a few results for 121 MHz, which I can show up here. 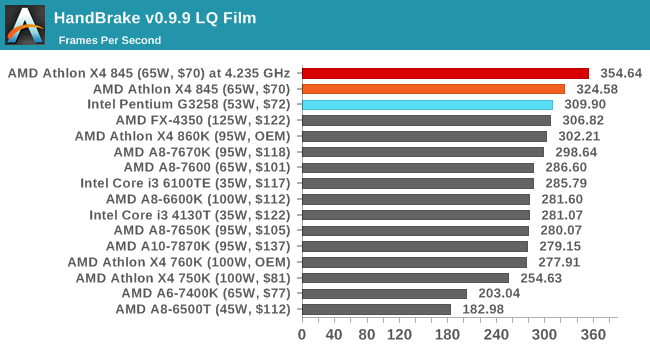 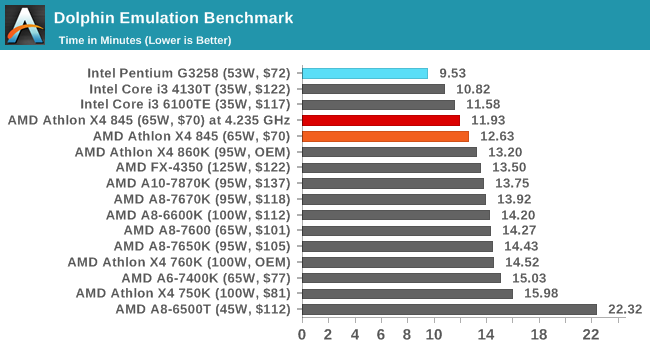 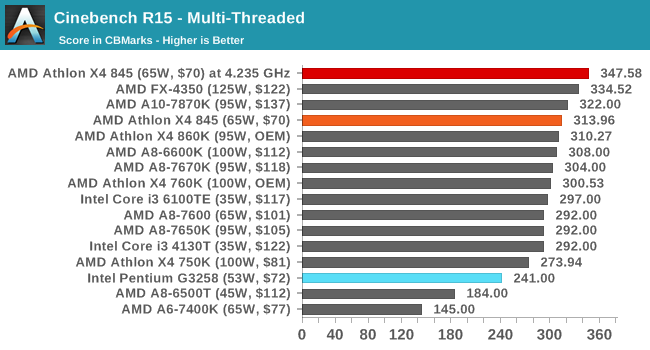 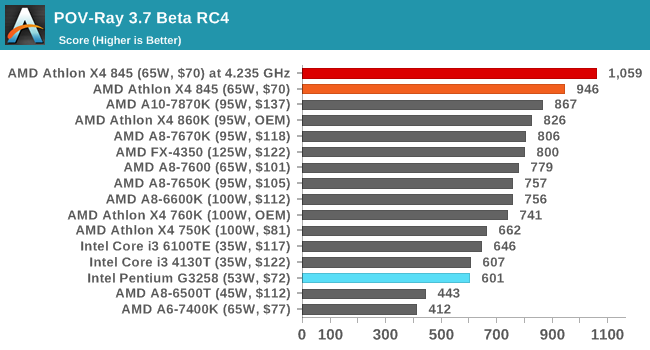 For the most part, CPU benchmarks went up 8-19% for a 21% overclock. However, stability was still a big issue, with some benchmarks only passing after a few reboots.

I clarified my results with a good friend over at JagatReview, who also participates on the world overclocking stage. The results on his samples were similar, with a 10-15% overclock coming out on the good side of average and a single sample going for 20% stable within reasonable temperatures. Unfortunately the ‘Your Mileage May Vary’ curse on the overclocking quality of AnandTech samples continues.