Intel’s latest Broadwell-E platform is the next iteration of their high-end desktop strategy, which involves bringing the low-to-mid range professional processors into the consumer market and adding a few features (such as overclocking), but removing others (ECC). For this launch, Intel introduced four processors, ranging from six cores to ten cores and varying in price from $434 to $1723. 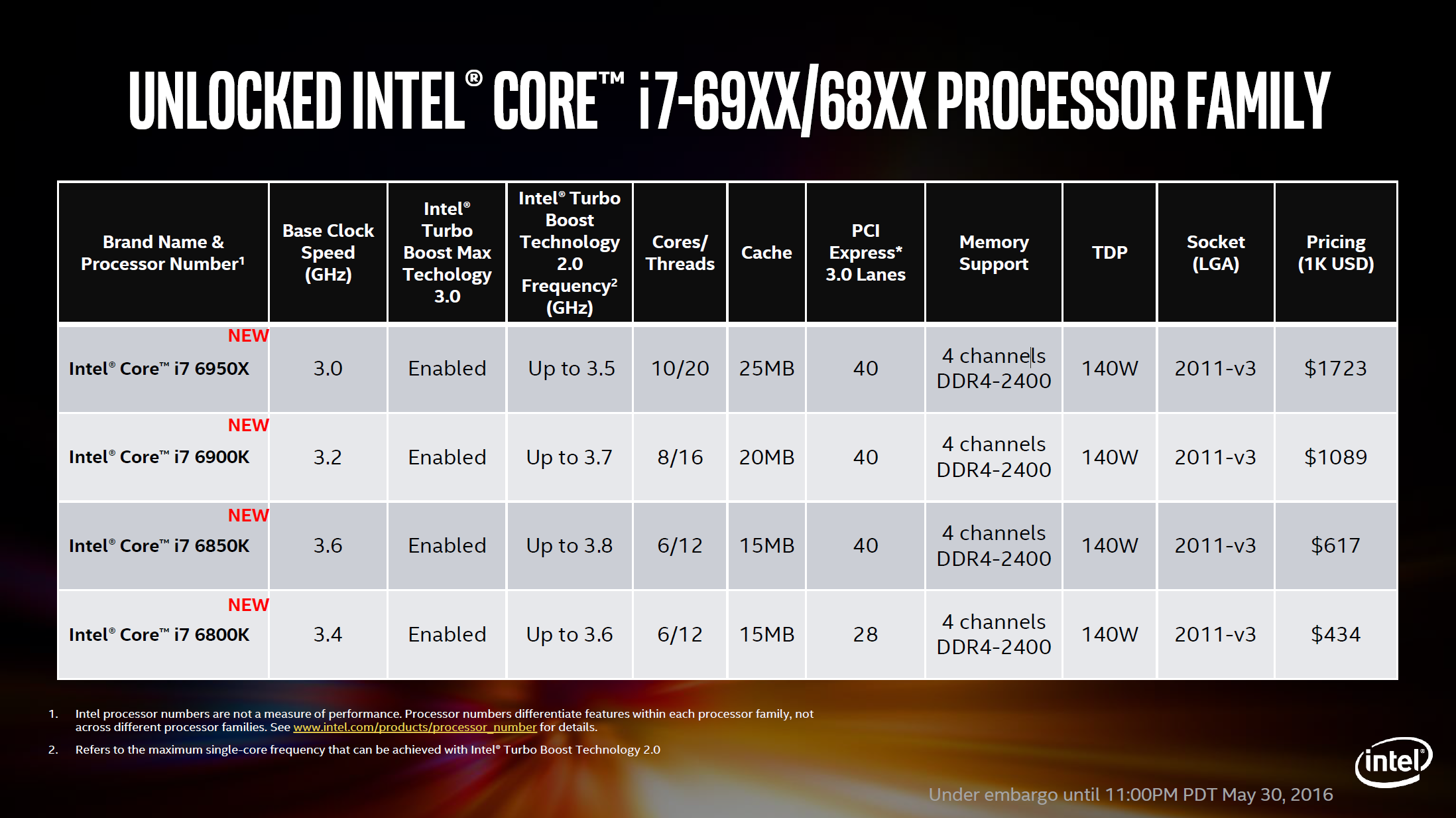 At AnandTech we have tested Intel’s Broadwell cores before, both in our Broadwell desktop processor review of the Core i7-5775C and the professional level Broadwell-EP Xeon E5-2600 v4 processor review. We noted a 3-5% increase in clock-per-clock performance compared to the previous generation ‘Haswell’ parts at the time. This review tests all the new Broadwell-E parts for direct comparison to the Haswell parts.

The move from Haswell-E to Broadwell-E is a change from 22nm to 14nm process technology but the microarchitecture is mostly the same, barring minor adjustments. These adjustments include an improved memory controller (now qualified on DDR4-2400), a faster divider, slightly improved branch prediction, a slightly larger scheduler, and a reduction in AVX multiply latency from 5 cycles to 3 cycles. 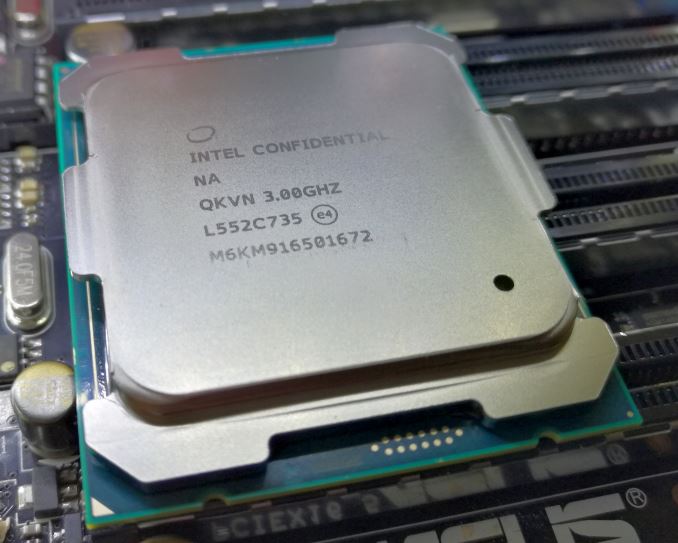 Due to this, the performance of the new Broadwell-E parts is somewhat predictable. Adding more cores and adjusting for frequency is a good marker, as is adjusting for the new memory speed. That means a move from the i7-5960X to the i7-6950X gives two more cores at the same frequency, or about 25% more performance. The downside of this upgrade is the price: the i7-5960X was launched at $999/$1049, whereas the new i7-6950X is $1723. That’s a big price increase by any standard.

For Broadwell-E, Intel introduced a new technology called Turbo Boost Max 3.0. With an appropriate driver, BIOS, BIOS settings, and software, this allows the system to pin a single threaded program to the best performing single core at a higher-than-listed frequency. It sounds as if it has potential, but the implementation means that very few users will ever see it.

Firstly, the driver/software implementation is perhaps easily overcome when the driver gets pushed through Windows 10 updates, similar to Speed Shift on Skylake processors which is now fully active. The part where it breaks down is in the BIOS and BIOS settings requirements. Ultimately the BIOS controls which P-states are in play (when the OS selects them), but the BIOS settings can override anything the processor might want by default. Because TBM3 involves an increase in frequency, this requires a number of settings in the BIOS to be enabled. But, because each processor is different, motherboard manufacturers are most likely going to run these options at a very conservative value so none of their users have a bad experience. In the end, whether it's used is going to depend on if the motherboard manufacturers enable it in the first place. In the motherboard we tested, we were told that it was a management decision to have it disabled by default. Because most users never touch the BIOS, especially in a prosumer/professional markets, it will most likely never be used in this case.

We didn’t get time to run a full benchmark suite with TBM 3.0 enabled, and will most likely follow up to see where in our tests it can make the most difference.

The pricing will be prohibitive to most. Many enthusiasts who have played in the HEDT space for a number of years are used to the $999/$1049 price point for the most expensive processor, even when the number of cores has increased. However, this time Intel has decided to increase the top chip's cost by almost 70%. This has complications as to what product is best for prosumers looking to upgrade.

For $1721, if a user wants to invest in the i7-6950X but does not want the overclocking, they can invest in either the 14-core E5-2680 v4 for $1745 giving 40% more cores at a lower power with a slight decrease in frequency, or get double the cores in a 2P system and using the E5-2640 v4 processor: a 10-core 2.4 GHz/3.4 GHz part, running at 90W, for $939. Two of these runs a $1878, which is slightly more but having double the cores available might be the more important thing here. However because these CPUs are not often found at retail, it means that users may have to approach a system builder/integrator in order to source them.

One would assume that Intel is interested in retaining the long term HEDT hold-outs still on Nehalem, Westmere and Sandy Bridge-E processors. These prices (and the overclocking performance) might make these users feel that they should hold on another generation, or invest in Haswell-E. That being said, the low-end Broadwell-E pricing is higher than that of the low-end Haswell-E, which will extend the pricing gap between the mainstream and the high-end desktop platform.