Now that we’ve seen GDDR5X in depth, let’s talk about the other half of the equation when it comes to feeding Pascal: delta color compression.

NVIDIA has utilized delta color compression for a number of years now. However the technology only came into greater prominence in the previous Maxwell 2 generation, when NVIDIA disclosed delta color compression’s existence and offered a basic overview of how it worked. As a reminder, delta color compression is a per-buffer/per-frame compression method that breaks down a frame into tiles, and then looks at the differences between neighboring pixels – their deltas. By utilizing a large pattern library, NVIDIA is able to try different patterns to describe these deltas in as few pixels as possible, ultimately conserving bandwidth throughout the GPU, not only reducing DRAM bandwidth needs, but also L2 bandwidth needs and texture unit bandwidth needs (in the case of reading back a compressed render target).

Since its inception NVIDIA has continued to tweak and push the technology for greater compression and to catch patterns they missed on prior generations, and Pascal in that respect is no different. With Pascal we get the 4th generation of the technology, and while there’s nothing radical here compared to the 3rd generation, it’s another element of Pascal where there has been an iterative improvement on the technology. 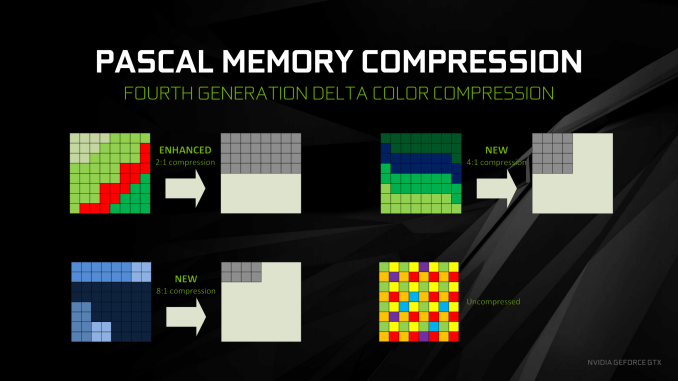 Meanwhile, new to delta color compression with Pascal is 4:1 and 8:1 compression modes, joining the aforementioned 2:1 mode. Unlike 2:1 mode, the higher compression modes are a little less straightforward, as there’s a bit more involved than simply the pattern of the pixels. 4:1 compression is in essence a special case of 2:1 compression, where NVIDIA can achieve better compression when the deltas between pixels are very small, allowing those differences to be described in fewer bits. 8:1 is more radical still; rather an operating on individual pixels, it operates on multiple 2x2 blocks. Specifically, after NVIDIA’s constant color compressor does its job – finding 2x2 blocks of identical pixels and compressing them to a single sample – the 8:1 delta mode then applies 2:1 delta compression to the already compressed blocks, achieving the titular 8:1 effective compression ratio.

Overall, delta color compression represents one of the interesting tradeoffs NVIDIA has to make in the GPU design process. The number of patterns is essentially a function of die space, so NVIDIA could always add more patterns, but would the memory bandwidth improvements be worth the real cost of die space and the power cost of those transistors? Especially since NVIDIA has already implemented the especially common patterns, which means new patterns likely won’t occur as frequently. NVIDIA of course pushed ahead here, thanks in part to the die and power savings of 16nm FinFET, but it gives us an idea of where they might (or might not) go in future generations in order to balance the costs and benefits of the technology, with less of an emphasis on patterns and instead making more novel use of those patterns. 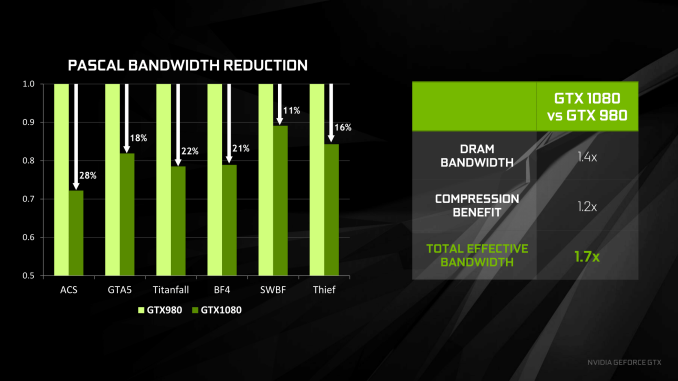 To put all of this in numbers, NVIDIA pegs the effective increase in memory bandwidth from delta color compression alone at 20%. The difference is of course per-game, as the effectiveness of the tech depends on how well a game sticks to patterns (and if you ever create a game with random noise, you may drive an engineer or two insane), but 20% is a baseline number for the average. Meanwhile for anyone keeping track of the numbers over Maxwell 2, this is a bit less than the gains with NVIDIA’s last generation architecture, where the company claimed the average gain was 25%. 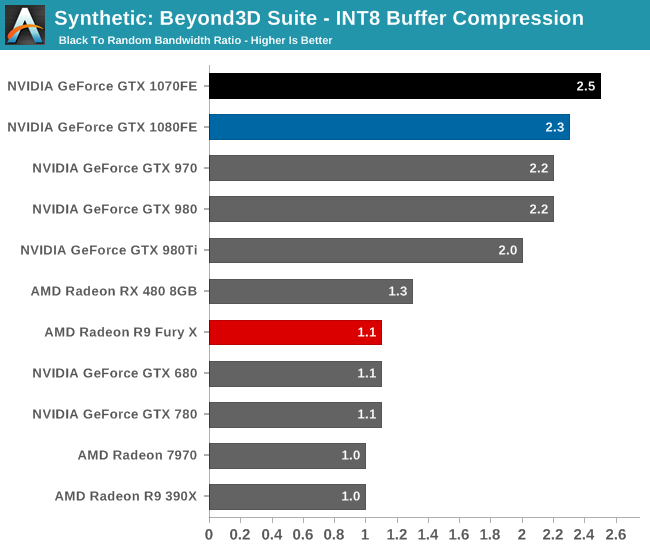 Meanwhile from a graphical perspective, to showcase the impact of delta color compression, NVIDIA sent over a pair of screenshots for Project Cars, colored to show what pixels had been compressed. Shown in pink, even Maxwell can compress most of the frame, really only struggling with finer details such as the trees, the grass, and edges of buildings. Pascal, by comparison, gets most of this. Trees and buildings are all but eliminated as visually distinct uncompressed items, leaving only patches of grass and indistinct fringe elements. It should be noted that these screenshots have most likely been picked because they’re especially impressive – seeing as how not all games compress this well – but it’s none the less a potent example of how much of a frame Pascal can compress. 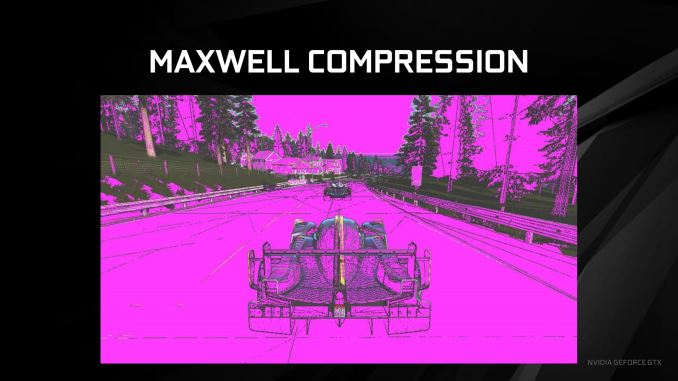 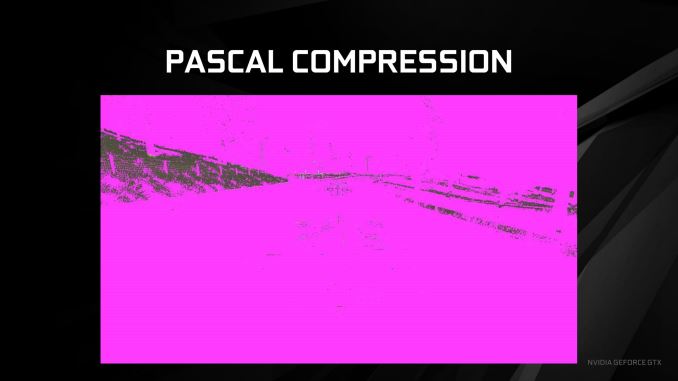 While it’s not a precise metric, the amount of bandwidth available per FLOP has continued to drop over the years with NVIDIA’s video cards. GTX 580 offered just short of 1 bit of memory bandwidth per FLOP, and by GTX 980 this was down to 0.36 bits/FLOP. GTX 1080 is lower still, now down to 0.29bits/FLOP thanks to the increase in both CUDA core count and frequency as afforded by the 16nm process.

The good news here is that at least for graphical tasks, the CUDA cores generally aren’t the biggest consumer of DRAM bandwidth. That would fall to the ROPs, which are packed alongside the L2 cache and memory controllers for this very reason. In that case GTX 1080’s bandwidth gains keep up with the ROP performance increase, but only by just enough.

The overall memory bandwidth needs of GP104 still outpace the memory bandwidth gains from GDDR5X, and this is why features such as delta color compression are so important to GP104’s performance. GP104 is perpetually memory bandwidth starved – adding more memory bandwidth will improve performance, as we’ll see in our overclocking results – and that means that NVIDIA will continue to try to conserve memory bandwidth usage as much as possible through compression and other means. How long they can fight this battle remains to be seen – they already encounter diminishing returns in some cases – but in the meantime this allows NVIDIA to utilize smaller memory buses, keeping down the die size and power costs of their GPUs, making PCB costs cheaper, and of course boosting profit margins at the same time.