For our final evaluation of the GTX 1080 and GTX 1070 Founders Edition cards, let’s take a look a overclocking.

Whenever I review an NVIDIA reference card, I feel it’s important to point out that while NVIDIA supports overclocking – why else would they include fine-grained controls like GPU Boost 3.0 – they have taken a hard stance against true overvolting. Overvolting is limited to NVIDIA’s built in overvoltage function, which isn’t so much a voltage control as it is the ability to unlock 1-2 more boost bins and their associated voltages. Meanwhile TDP controls are limited to whatever value NVIDIA believes is safe for that model card, which can vary depending on its GPU and its power delivery design.

Both of these are respectable overclocks, but compared to Maxwell 2 where our reference cards could do 20-25%, these aren’t nearly as extreme. Given NVIDIA’s comments on the 16nm FinFET voltage/frequency curve being steeper than 28nm, this could be first-hand evidence of that. It also indicates that NVIDIA has pushed GP104 closer to its limit, though that could easily be a consequence of the curve.

Given that this is our first look at Pascal, before diving into overall performance, let’s first take a look at an overclocking breakdown. NVIDIA offers 4 knobs to adjust when overclocking: overvolting (unlocking additional boost bins), increasing the power/temperature limits, the memory clock, and the GPU clock. Though all 4 will be adjusted for a final overclock, it’s often helpful to see whether it’s GPU overclocking or memory overclocking that delivers the greater impact, especially as it can highlight where the performance bottlenecks are on a card.

To examine this, we’ve gone ahead and benchmarked the GTX 1080 4 times: once with overvolting and increased power/temp limits (to serve as a baseline), once with the memory overclocked added, once with GPU overclock added, and finally with both the GPU and memory overclocks added. 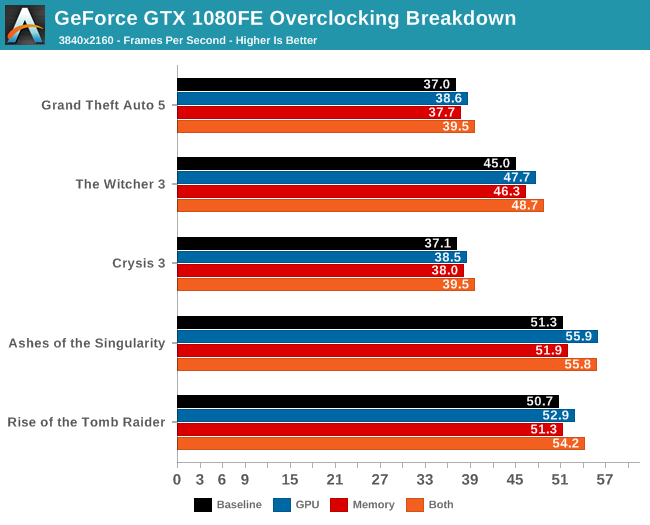 Across all 5 games, the results are clear and consistent: GPU overclocking contributes more to performance than memory overclocking. To be sure, both contribute, but even after compensating for the fact that the GPU overclock was a bit greater than the memory overclock (12% vs 10%), we still end up with the GPU more clearly contributing. Though I am a bit surprised that increasing the power/temperature limit didn't have more of an effect. 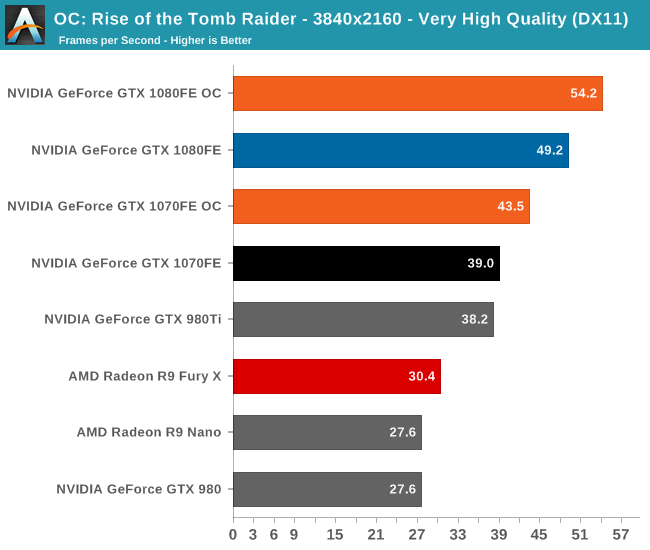 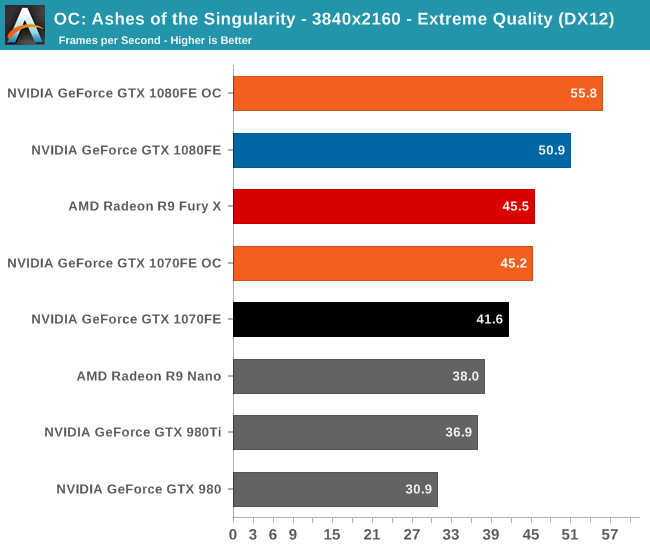 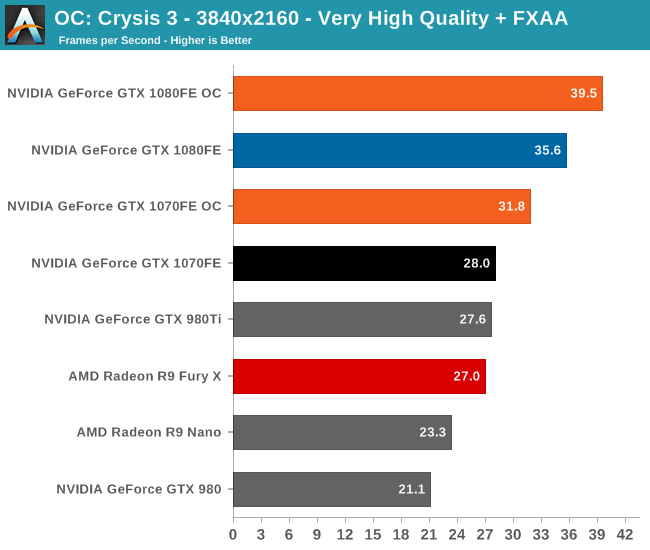 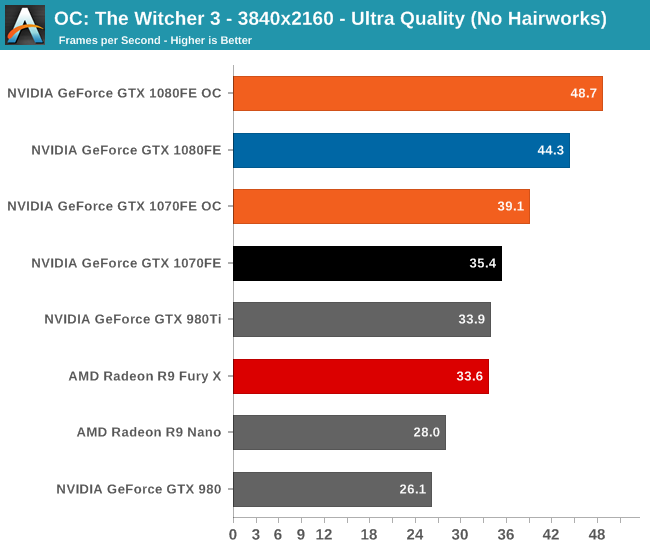 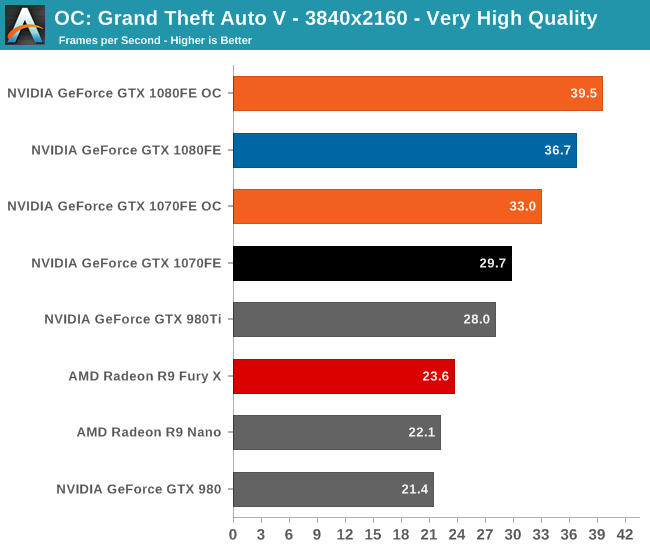 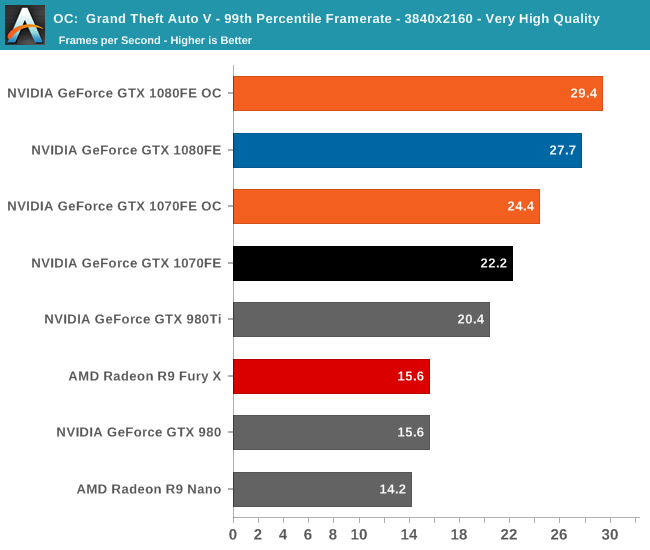 Overall we’re looking at an 8%-10% increase in performance from overclocking. It’s enough to further stretch the GTX 1080FE and GTX 1070FE’s leads, but it won’t radically alter performance. 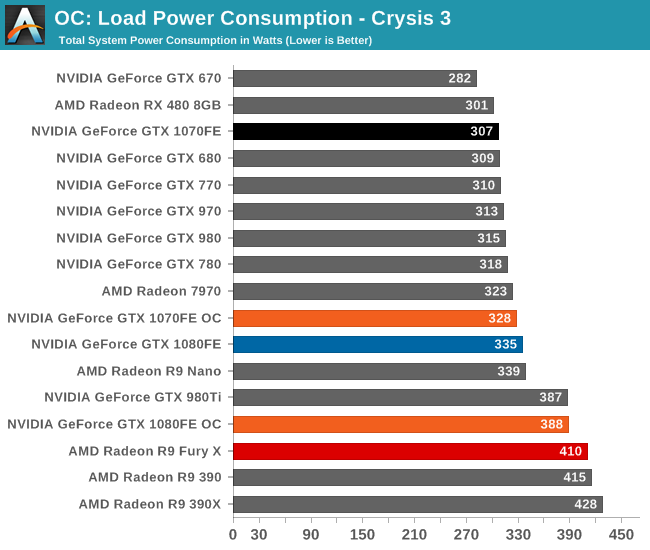 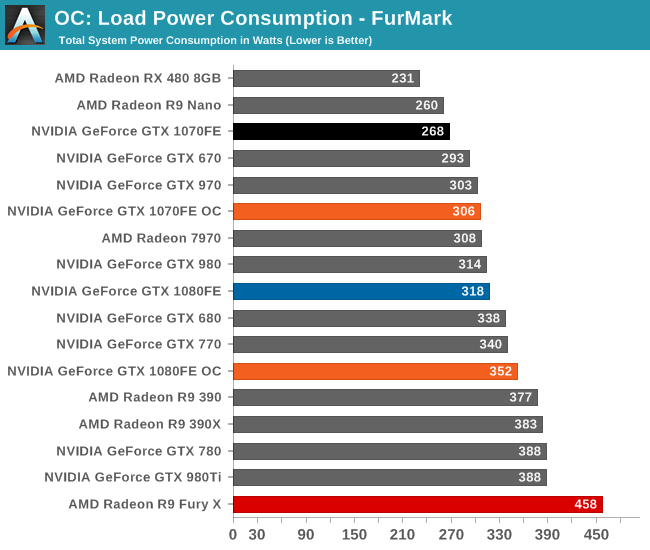 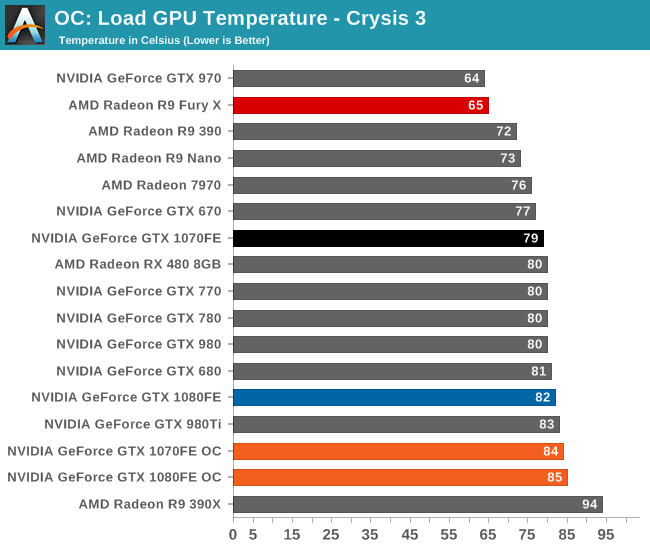 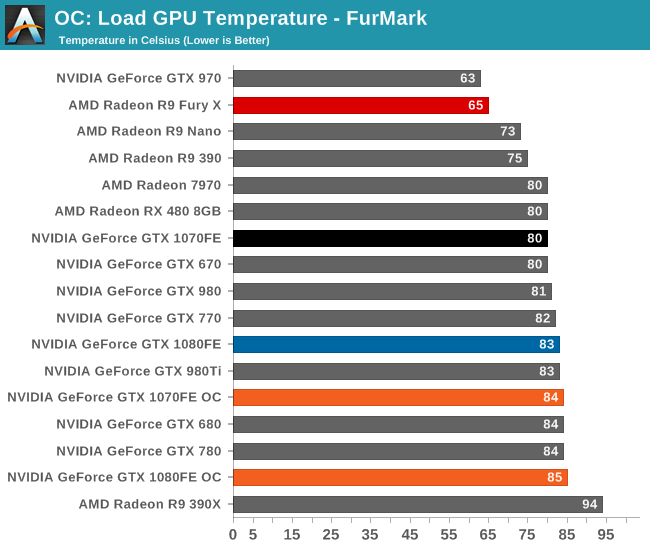 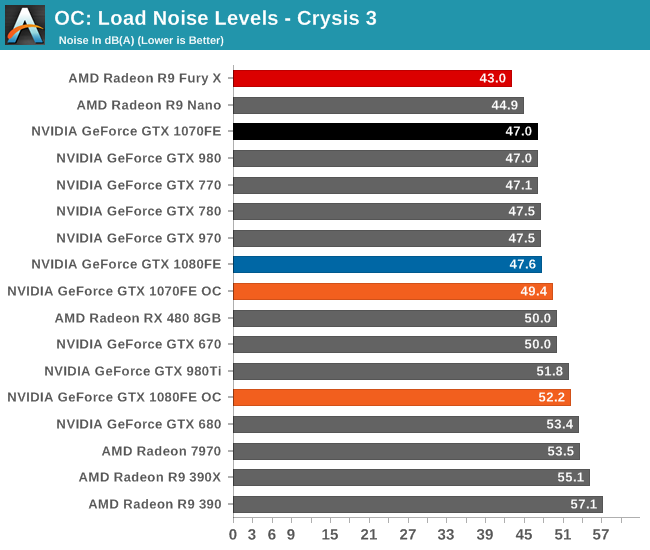 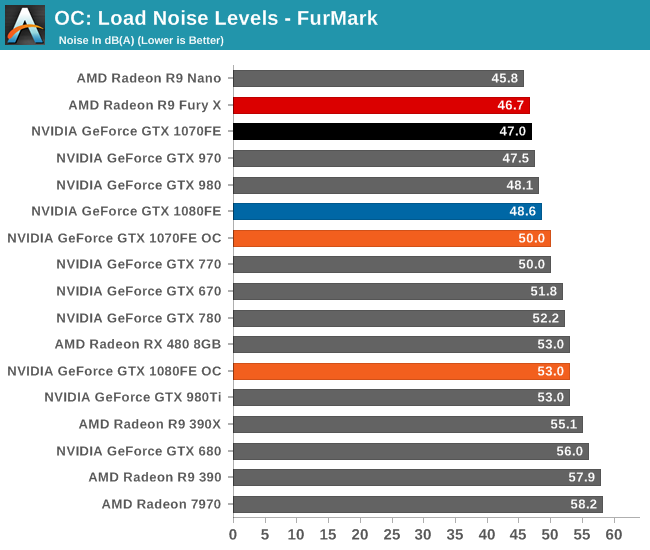 Finally, let’s see the cost of overclocking in terms of power, temperature, and noise. For the GTX 1080FE, the power cost at the wall proves to be rather significant. An 11% Crysis 3 performance increase translates into a 60W increase in power consumption at the wall, essentially moving GTX 1080FE into the neighborhood of NVIDIA’s 250W cards like the GTX 980 Ti. The noise cost is also not insignificant, as GTX 1080FE has to ramp up to 52.2dB(A), a 4.6dB(A) increase in noise. Meanwhile FurMark essentially confirms these findings, with a smaller power increase but a similar increase in noise.

As for the GTX 1070FE, neither the increase in power consumption nor noise is quite as high as GTX 1080FE, though the performance uplift is also a bit smaller. The power penalty is just 21W at the wall for Crysis 3 and 38W for FurMark. This translates to a 2-3dB(A) increase in noise, topping out at 50.0dB for FurMark.