Our battery life tests have also been upgraded for 2016. Our web browsing test was previously shown in the first part of the Galaxy S7 review, and since that time it has been tweaked to the point that we're happy with the workload it puts on devices. We've also migrated to GFXBench's Manhattan test for examining battery life with a heavy GPU workload. 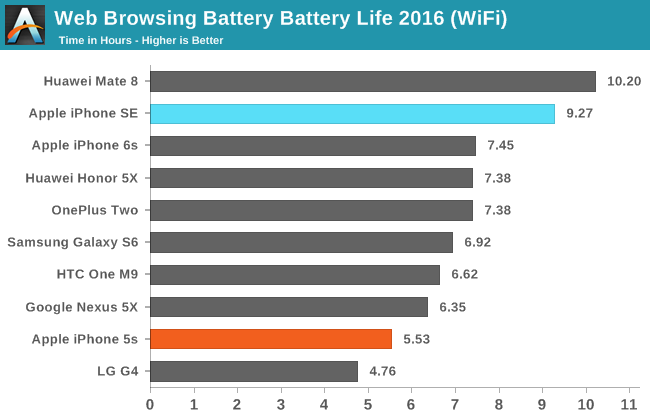 In our WiFi web browsing test the iPhone SE does quite well. When Apple originally advertised that the SE has better web browsing battery life than the 6s and 6s Plus I saw some confusion from many people, but it's actually not a surprising outcome. The SE is using a much smaller and lower resolution LCD display than the other iPhones, which significantly reduces the total platform power. The boost in battery capacity from the iPhone 5s helps as well. Apple advertises that the SE can last two hours longer on WiFi than the 6s, and in our test it almost meets that target.

Due to a recent move, I'm still trying to find a place with sufficient signal strength that I can use for LTE battery life testing. Until such a time, I'm unable to post LTE battery life results for the SE. In general you can expect LTE battery life to be a couple hours shorter than on WiFi, and Apple advertises that the SE can last three hours longer on LTE than the 6s, so if they get anywhere close to that then LTE battery life should be quite good.

The 4-inch iPhones have never lasted long in GFXBench's battery test. With the new Manhattan test the GPU is doing a lot more work than it was with T-Rex HD, and there aren't any periods of idle. The iPhone SE achieves the lowest battery lifetime of just 1.46 hours. However, the on screen frame rate during the test is hitting Vsync, which is actually concerning because we moved to Manhattan to avoid the problem of devices hitting that cap and then idling in the middle of the test. As I've said in the past, you need to consider both performance and battery life in this test. The iPhone SE is obviously an improvement over the 5s even though it dies half an hour earlier, because by the end of the test the iPhone SE is giving you 6x the performance of the 5s due to the A7 SoC's greater degree of thermal throttling.

Like the iPhone 6s and 6s Plus, the iPhone SE ships with Apple's 5W charging block. While this can be quite problematic on a large phone like the iPhone 6s Plus, on a small phone it won't pose as much of an issue as the phone's battery capacity is much lower. Ideally we'd like to see a time to charge that is under three hours, and coming in under two hours is even better. 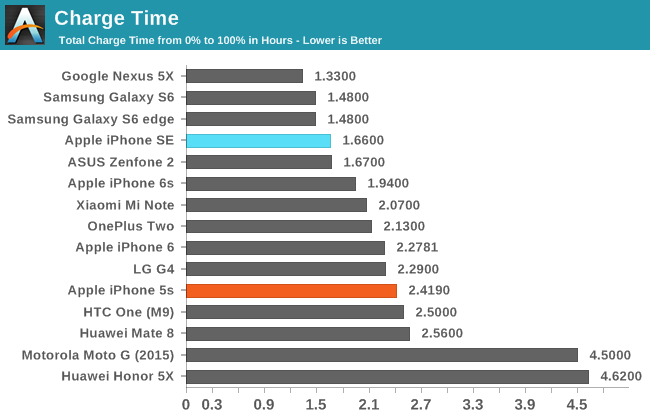 The iPhone SE charges quite quickly. We've seen improvements to charge time on the iPhone since the era of the iPhone 5s, and with the SE having a smaller battery than the iPhone 6s it makes sense that the charge time would be shorter. I do wonder how long it would take to get to full charge if Apple bundled a 10-15W charger with the phone, although with the current time being under two hours you also need to consider if the potential reduction in battery longevity from quicker charging is worth it.