The display on the iPhone SE is one of its selling points, but not due to its specs. The iPhone SE takes the place of the iPhone 5s in Apple's iPhone line, and like the 5s it has a 4-inch IPS display with a resolution of 1136x640. While there's no way to confirm whether or not it's the exact same panel, you'll see in a moment that the characteristics are similar enough that it's probably safe to assume that it is. To evaluate the iPhone SE's display I've run it through our standard display test bench that examines peak brightness and black levels, along with the accuracy of greyscale shades and both color saturations and color mixtures. 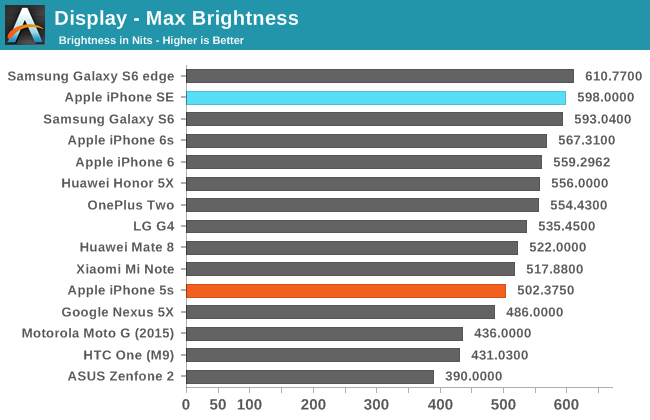 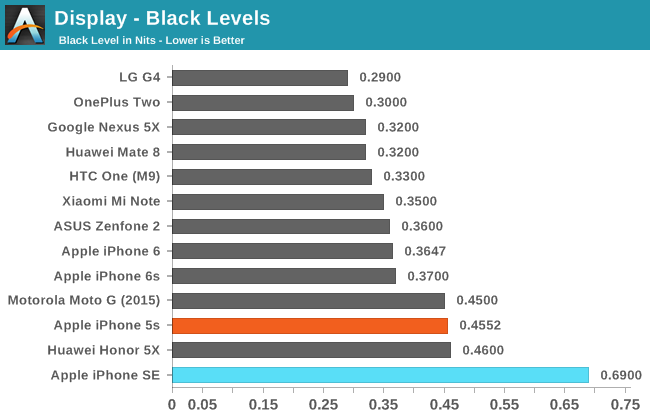 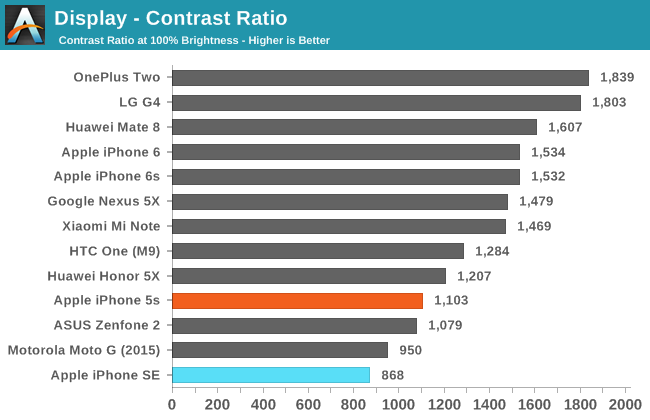 Apple rates their iPhone displays for a brightness of 500 nits. There's always some degree of variance, but it's always the good sort where you're getting more than you paid for. In our iPhone 5s review we saw that it had a peak brightness of around 500 nits, while the iPhone 5c reached nearly 600. This iPhone SE is similar, with a peak brightness of 598 nits. I wouldn't expect this on every unit, but it's just interesting to note because I've never encountered an iPhone 6 or 6s that was so far above the spec.

The black level on the SE at peak brightness is quite high. Part of this is due to the fact that the screen has a bright backlight, but ultimately even with the high peak brightness the contrast ratio is well behind what you get on other phones, and even compared to our 5s unit it's quite low. It's important to note that Apple only ever rated the 4-inch iPhones at 800:1, but when you put the phone side by side with modern IPS displays on devices like the iPhone 6s, and the LG G4, the black ends up looking more like a dark grey. 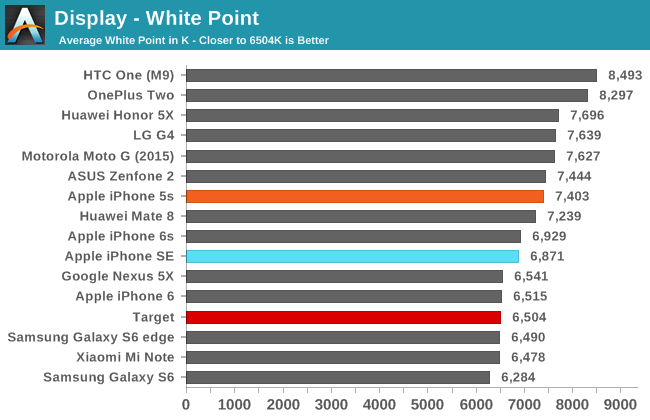 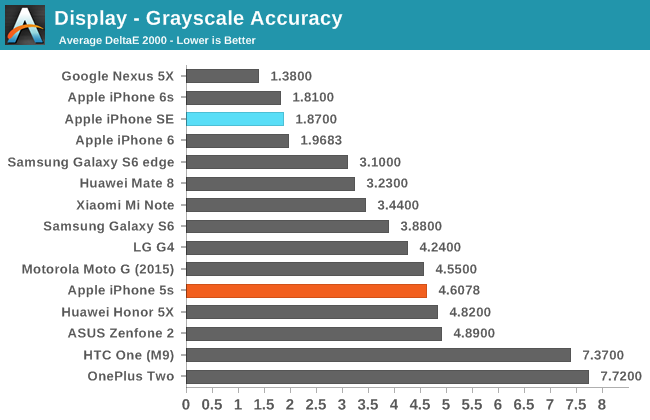 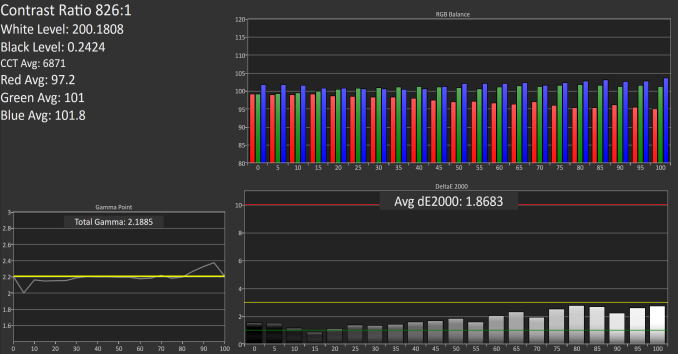 The iPhone SE does quite well in our greyscale test. As usual, there is a degree of blue shifting, but it’s not too severe and the CCT average is below 7000. The gamma is quite straight, and in the end there aren’t any shades of grey with a DeltaE greater than three, which is generally the goal. With an average DeltaE of 1.87 there’s really not much more you can ask for. 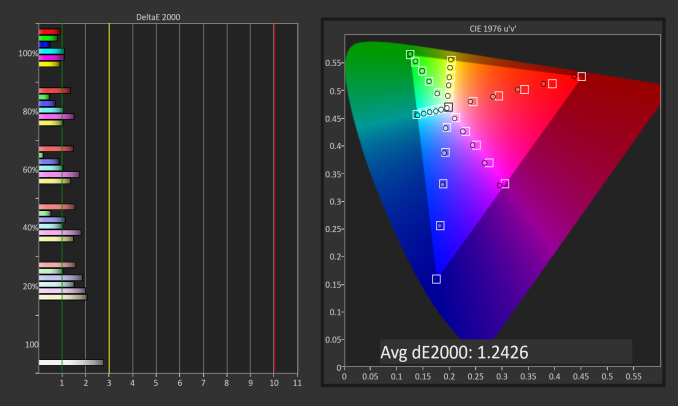 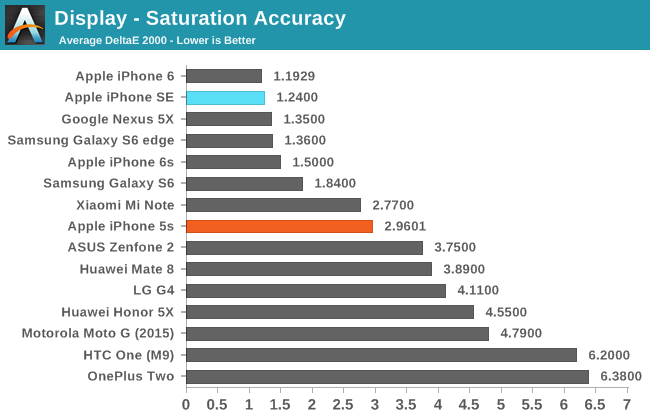 The iPhone SE renders primary and secondary colors with a high degree of accuracy. The DeltaE for many colors is below one, which means the error cannot be perceived by the eye even with the colors side by side with the true reference color. In the absolute worst case you get saturations with a DeltaE of 2 which is quite impressive. With an average DeltaE of 1.24, there’s really not much that Apple could improve here. 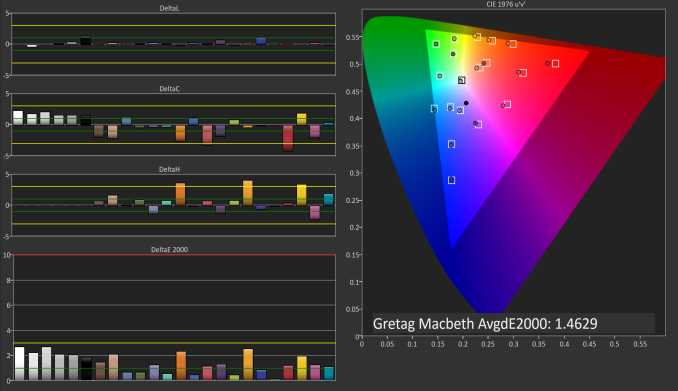 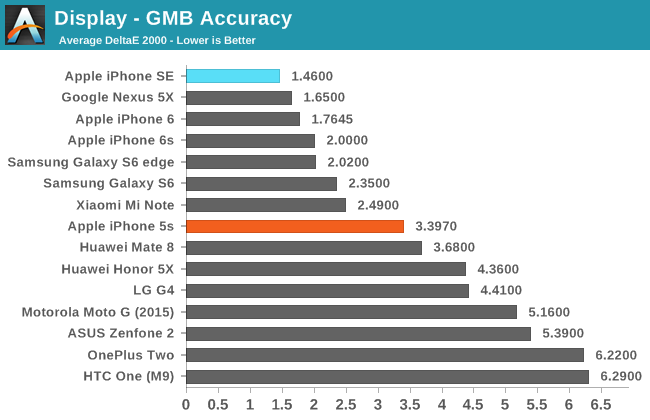 Given that accuracy with color mixtures is just a function of saturation accuracy and greyscale accuracy, it’s not surprising to see the iPhone SE perform well here. There isn’t a single DeltaE error over three, and in general most are between one and two. The overall error is 1.46, and there’s little improvement that Apple could actually make to the accuracy of color mixtures.

Ultimately the iPhone SE ships with a solid IPS display. At 1136x640 it’s definitely not the highest resolution display on the market, but Apple does give you best in class color accuracy, and at 326ppi it’s still high enough resolution to not have really obvious aliasing. Apple was definitely not going to move to 1704x960 on their $400 4-inch smartphone, and a boost in resolution will likely come with whatever Apple’s next 4-inch iPhone is.

Given that Apple is in the process of moving their devices to the wider DCI-P3 color gamut and likely moving the iPhones to a 3x scale resolution, it’ll be interesting to see where the iPhone SE’s display stands relative to the next generation of iPhones. With sharpness and color accuracy being equivalent between the SE and the 6s, the only significant difference in quality right now is the lower contrast ratio on the SE. Apple most likely plans to keep the SE around for two to three years, and so that gap will widen as time goes on.