The primary rear camera is the same as the G4’s. It uses a Sony IMX234 Exmor RS sensor with a native 16:9 aspect ratio and a hybrid autofocus system that combines laser AF and contrast AF. The laser AF system uses a modified proximity/light sensor with an 850nm laser that makes time-of-flight calculations to quickly determine focus distance. While the focus speed of laser AF is roughly equivalent to phase detect AF (PDAF), we’ve found PDAF to work more reliably. The G4’s upgraded 3-axis OIS 2.0 system, which improved motion compensation from 1° to 2°, also carries over to the G5’s primary camera as does the separate color spectrum sensor, which is an RGBC (red/green/blue/clear) and IR sensor that measures the color temperature of a light source and is supposed to improve the performance of the auto white balance system.

Limits on sensor area and z-height make improvements to smartphone camera performance challenging. One way to improve image quality, especially in low-light conditions, is to increase the amount of light hitting the sensor by enlarging the lens aperture (the hole through which light enters). This has ignited an f-stop spec war. LG held the bragging rights for largest aperture last year with the G4, but Samsung’s Galaxy S7 devices take the top spot this generation with their new camera’s f/1.7 aperture, bumping the G5, which uses the same f/1.8 aperture lens system as the G4, to a close second place. For comparison, the G5’s aperture area is 10.6% larger than the Nexus 6P and Moto X Pure Edition, 44.1% larger than Huawei’s P9, and 69.5% larger than the iPhone 6s Plus.

The G5’s new feature is a second rear camera. Unlike other dual-camera systems such as HTC’s One M8 or the new Huawei P9, the G5 does not use its second camera to create a depth map, eliminating the ability to adjust focus after a picture is taken, apply background blur or bokeh, or automatically remove/replace the background. The G5 also does not combine the output of both sensors to improve low-light sensitivity or increase image resolution. Instead, it uses its two sensors independently—one a typical smartphone camera and the second a specialized wide-angle camera.

When using the full-frame 35mm format, a 50mm focal length lens provides a 40° horizontal field-of-view (FOV)—significantly less than the human visual system’s roughly 200° (124° binocular) FOV—with essentially no magnification. Shorter focal lengths, like the primary camera’s 29mm (35mm format equivalent), make objects appear smaller than what’s seen by the naked eye and increase FOV, in this case to 78°. The G5’s second, wide-angle camera increases FOV to 135°, squeezing more of a scene into the image it captures. Its Sony IMX268 sensor appears to be a custom part for LG, so information is scarce; however, based on its overall size and the specs for Sony’s other 8MP sensors, it appears to be a 1/3.2” format implying 1.4µm pixels. If true, this would give the wide-angle camera a 12mm focal length (35mm format equivalent).

With such a short focal length, it’s accurate to say that the G5’s wide-angle camera uses a fisheye lens, which applies higher magnification to objects closer to the lens. This causes 2D images to appear as though they are mapped onto the surface of a sphere, a phenomenon called barrel distortion. Because fisheye lenses distort both the relative size and distance between objects in the photo they are not well suited to general purpose photography, limiting them to specific situations where an extreme FOV is necessary or for applying artistic flair.

The G5’s wide-angle camera supports automatic HDR like the primary camera, but it does not have OIS nor does it use PDAF.

The G5’s front-facing camera is also identical to the G4’s. Its 8MP resolution is still pretty high for a selfie camera. It natively captures images at a 16:9 aspect ratio, which is a bit odd for single-person selfies, but does work well for group shots.

LG’s camera app offers a lot of flexibility by providing three different user interfaces shown above. The Simple interface strips away all complexity, including access to any features or settings. Capturing images requires tapping the screen or pressing the volume button because there’s no visible shutter button, and there’s no way to adjust focus or exposure.

The default Auto interface is what most people will use, offering an easy point-and-shoot experience. There’s a shutter button that can be held down to take burst photos, a video record button, and a button to access the photo gallery. A sharing menu slides out from one edge for sending photos directly to other apps or posting pics directly to social media. While the flash toggle appears on the main screen, the HDR toggle is hidden in the settings menu.

The Manual interface shown above gives you control over all of the settings for both rear cameras, including white balance, focus, exposure compensation, ISO, and shutter speed. The current settings are displayed along the top edge, while buttons along the bottom open the vertical slider controls for each setting. The standard camera controls such as the shutter button and menu bar rotate with screen orientation, but the manual controls do not, which is a little inconvenient.

The camera app retains automatic control over each setting until they are manually adjusted; thus, you can set white balance or focus manually while the camera automatically adjusts the exposure parameters for you. Unfortunately, there’s no shutter priority feature, so adjusting either ISO or shutter speed engages the exposure lock. This forces you to adjust both controls manually to get a proper exposure. A more convenient approach would be to only engage the exposure lock once both controls were set manually, allowing you to set a specific shutter speed while the camera adjusts ISO automatically.

LG’s Manual camera interface suffers from a couple of other minor issues. First, it’s difficult to manually adjust focus without a focus peaking feature or without a magnified view of the focus area. Second, the interface is not particularly efficient. The slider control is not close to its corresponding button, forcing your finger to jump back and forth between the different positions, and only one slider control is visible at time, particularly inconvenient when adjusting ISO/shutter speed. Unlike the LG V10, there’s no Manual interface for shooting video.

LG’s special camera modes (discussed below) are not accessible in the Manual interface, so the Mode button gets replaced by a toggle to enable RAW image capture. The RAW .dng file skips the camera app’s post-processing routines, including noise reduction, allowing you to import the image into a separate program for manual processing with potentially better results. 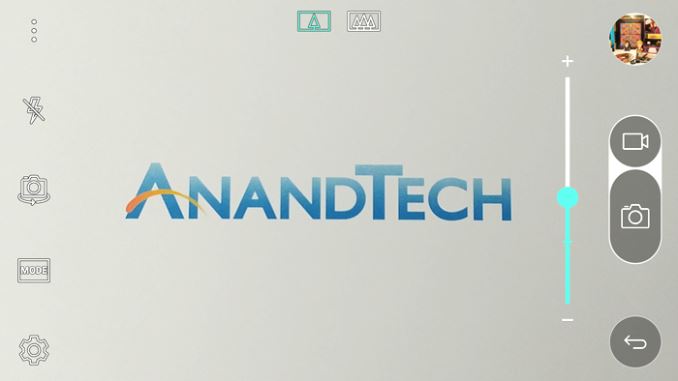 All three user interfaces make switching between the two different rear cameras simple. The most direct method is by tapping the little pine tree icons along the top or right edge of the screen. Another method involves using the usual pinch gesture for the camera’s digital zoom feature. In the screenshot above, the small horizontal hash mark on the zoom control, which functions as both a visual marker and a physical detent, denotes the transition point between the two cameras. Switching cameras using either method causes about a one-second delay where the screen goes blurry, so the transition is not entirely seamless. This delay is likely to give the second camera a chance to focus before displaying its preview and to make the jump between the two cameras less visually jarring.

The G5’s camera modes and settings are shown in the screenshots above. The aforementioned HDR toggle is located below the photo and video format selector that allows you to set the video resolution as well as the aspect ratio for photos, which simply crops the sensor but does not actually change the vertical resolution. There’s also no way to adjust the image quality or compression ratio, which is a bit odd. Also in the settings menu are some film effects that seem to play with RGB levels, a button for the self-timer, a toggle for the voice activated shutter, and a toggle for grid lines. There’s also a toggle to switch between OIS and OIS plus EIS when shooting video, which we’ll discuss more in the video section later in the review.

The G5’s panoramic photo and time-lapse video modes are pretty standard. The Snap mode functions as a very rudimentary video editor, creating videos by sequentially assembling short video snippets. Each snippet can either be a fixed three second duration or any duration up to sixty seconds depending on whether the record button is tapped or held down. You can also split the screen into multiple panes like the Multi-view mode discussed below. Individual snippets can be deleted but not rearranged, and Snap mode lacks the ability to add transitions between snippets. 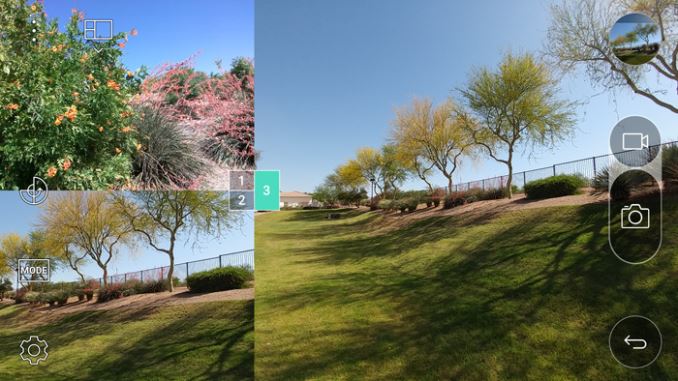 The Multi-view mode allows you to stitch two, three, or four photos or videos (limited to three-second clips) into a single mosaic image. The content for each tile is captured separately rather than all at once, allowing you to move around to find different subjects or angles. Swiping in the active tile switches between the three cameras with any combination possible.

The Popout mode takes advantage of both rear cameras and is the only time both are used at the same time. The G5’s wide-angle camera provides the background image, while the primary camera takes the popout image in the center, which can take several different shapes. There are also several optional effects for the background image shown with a live preview. These are stackable, so you can apply none of them, all of them together, or any combination in between. It’s a neat effect, but not enough to justify the second camera’s existence.

The front-facing camera uses either the Simple or Auto interfaces; there’s no Manual interface for fine tuning selfies. A slider for adjusting the app’s beauty mode, which basically smoothes skin blemishes, sits at the bottom of the Auto UI. The slider has eight discrete positions from off to plastic mannequin.

Like both rear cameras, the front camera supports automatic HDR. The G5’s camera app also uses the screen as a selfie light by reducing the size of the preview image and using most of the screen to emit a soft white light.