Ironically, despite being a leading manufacturer of IPS LCD panels, LG’s phones generally have disappointing displays. Going back to the G3, LG jumped on the QHD (2560x1440) bandwagon early to enhance its spec sheet, but the first-gen panel consumed more power than FHD panels of the same size (the lack of panel self-refresh did not help either), and its Snapdragon 801 SoC strained to process so many pixels. LG also applied color compression and overly aggressive edge sharpening via software that degraded visual quality.

LG equipped last year’s G4 with an all new 5.5-inch QHD display. Its IPS Quantum Display moniker was a bit misleading, however, because the panel did not use quantum dot technology or bring about a quantum leap in performance. While this new panel took advantage of photo-aligned crystals to significantly improve black levels, it fell short of LG’s claim of 56% better color accuracy relative to the G3. One reason for its poor color performance was an overly cool white point that shifted colors towards blue. The combination of a wider color gamut—LG claimed 98% coverage of the DCI-P3 color space—and Android’s lack of color management was another reason.

Has LG learned from its past mistakes? Can the G5’s display compete with the IPS and AMOLED panels in other flagship phones? To find out we will subject the G5 to a series of tests using an X-Rite i1Pro 2 spectrophotometer and an i1Display Pro colorimeter for contrast measurements. SpectraCal's CalMAN 5 software will manage the data. 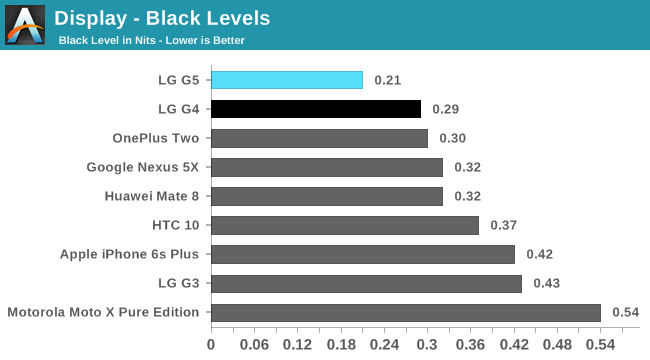 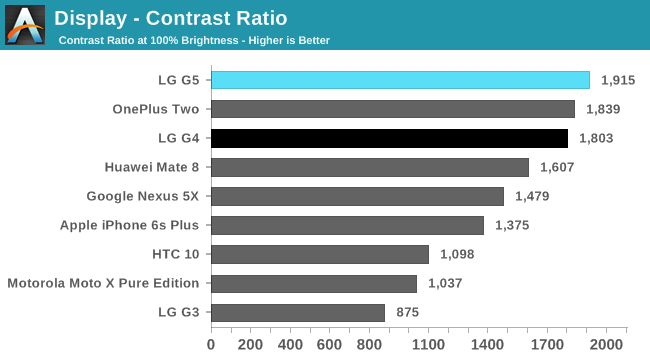 The LG G5’s new 5.3-inch QHD IPS Quantum Display has a pixel density of 554ppi. While all of the G5’s we’ve seen use an LG panel, we cannot rule out the possibility of dual-sourcing. The Advanced In-Cell Touch technology introduced in the G4’s display carries over to the G5’s new display as does the use of photo-aligned crystals, which give the G5 an excellent black level that’s comparable to the G4. The G5’s contrast ratio is also among the best we’ve seen among devices with IPS panels. Of course, these results pale in comparison to AMOLED displays that can completely turn off individual pixels, giving them a black level of zero and an infinite contrast ratio (reflections on the front of the display reduce the effective contrast ratio for both IPS and AMOLED panels).

Normally, we measure black level and contrast ratio at the panel’s maximum brightness; however, the G5’s measurements were made at its maximum stable brightness of about 405 nits rather than its peak brightness shown below. 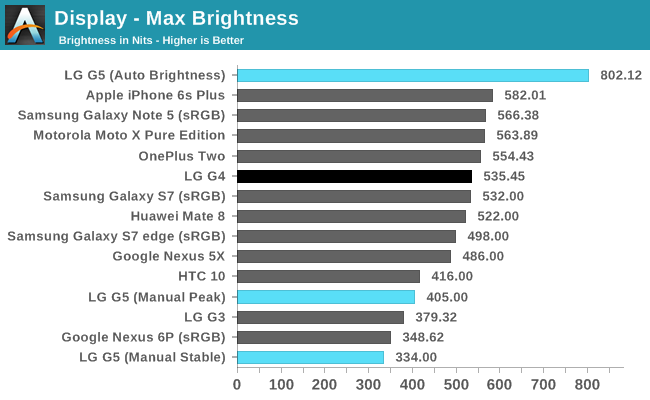 The G5 includes LG’s Daylight Mode feature that boosts outdoor visibility when using the auto-brightness mode. This pushes peak brightness to an impressive 802 nits, just shy of LG’s 850 nit claim, but the backlight cannot sustain this level for very long without overheating. After hitting its peak brightness, the display immediately begins to dim linearly over a period of two minutes until it reaches its maximum stable brightness of about 405 nits. The reduction in brightness is gradual enough to not be noticeable.

While the boost is short lived, it’s extremely effective. Even outside in the midday Arizona sun, the G5’s screen is clearly visible with bright, saturated colors. It’s obvious when it kicks in, as brightness jumps to the peak value without any ramp up. Occasionally the screen would flash once or twice when moving between sunlight and shade, but the feature works well overall and gives the G5 the best outdoor visibility of any device I’ve seen—at least for a short period of time. 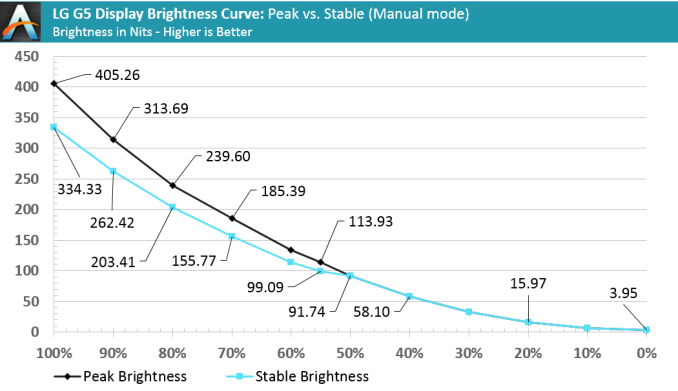 The G5’s maximum stable brightness (the value it can sustain indefinitely) is a much less impressive 405 nits. To make matters worse, LG continues to play games with the display’s backlight when trying to adjust brightness manually. Just like the G3 and G4, the G5 includes an automatic dimming feature that slowly reduces brightness by about 15% over a period of 45 seconds. The chart above shows this behavior affecting brightness settings above 50%, ultimately limiting the maximum stable brightness in manual mode to a measly 334 nits.

The auto-dimming behavior cannot be disabled, and using third-party apps to adjust brightness cannot override it. Fortunately, the auto-brightness mode, which does not suffer from this, works well enough. Also, all G5s may not use auto-dimming. Like we’ve seen with the G3 and G4, it’s possible that firmwares for some carriers/regions will ship with this disabled. 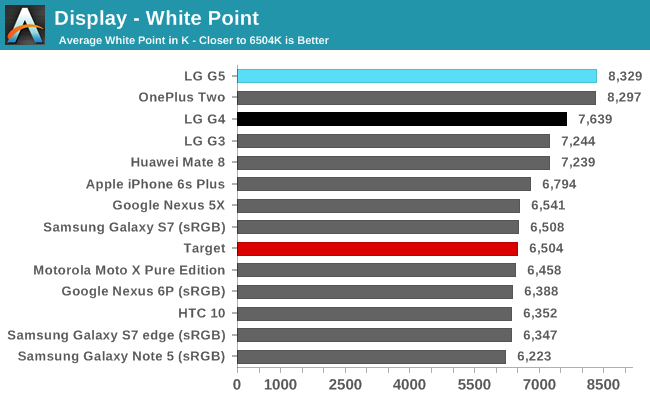 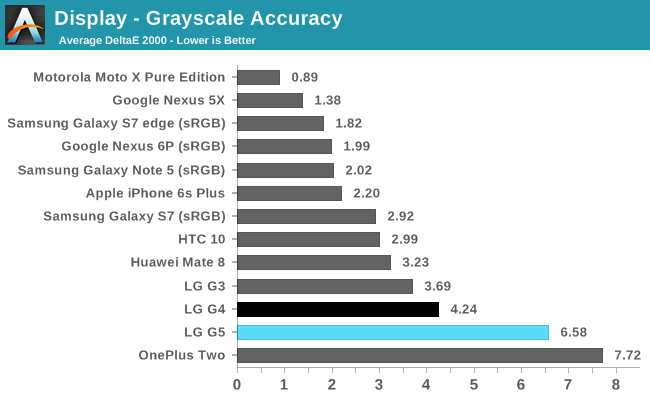 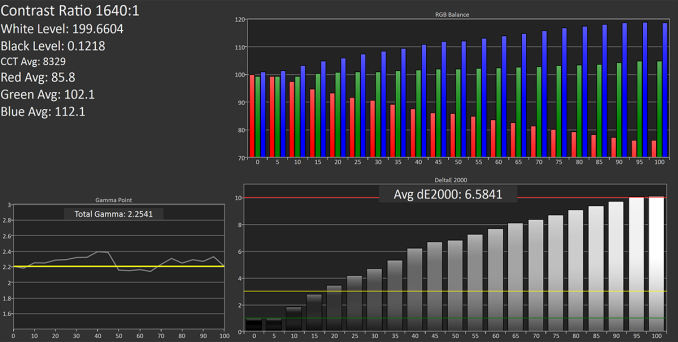 Our G5 uses a white point of about 8,300K, slightly worse than the G4 and about the same as the OnePlus 2. This excessively cool white point gives white backgrounds and shades of gray a very noticeable blue tint. The imbalance between the red and blue primary colors is less for darker shades, which reduces the ΔE2000 grayscale error from a peak of about 10 at 100% white to an average value of 6.58 over a full luminance sweep.

The G5’s average gamma falls just above the ideal value of 2.2, peaking at about 2.4, and should not cause any appreciable color shifts or loss of shadow and highlight detail. In manual brightness mode at both the minimum setting and at 200 nits, gamma is relatively stable; however, at the display’s maximum stable brightness, which needs to be measured with auto-brightness turned on, we see significant variation in gamma with luminance accompanied by changes in RGB balance. Evidently, the G5 uses content-adaptive backlight control (CABC) with auto-brightness enabled, but not in manual brightness mode. Perhaps LG is using CABC to save power in auto mode in lieu of the auto-dimming feature in manual mode. 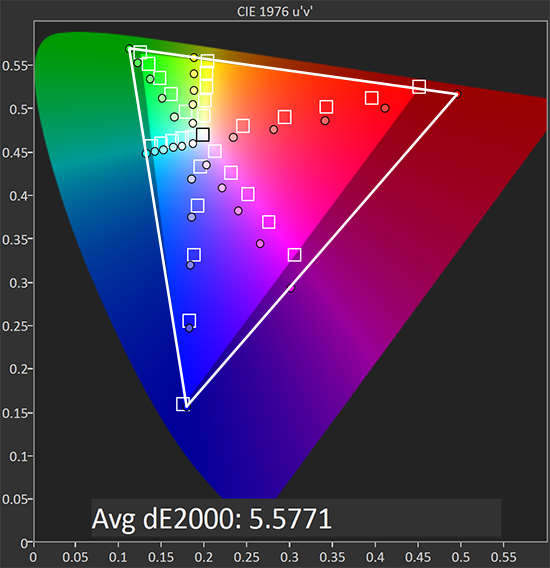 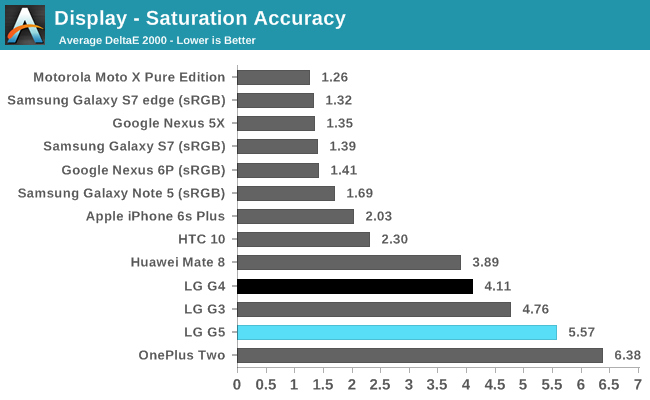 LG is targeting 98% of the DCI-P3 color space with its IPS Quantum Display. This color space comes from Digital Cinema Initiatives (DCI), a joint venture between the major movie studios that establishes standards for digital movie projection in cinemas. The chromaticity for the blue primary is the same for both the DCI-P3 and sRGB color spaces, but DCI-P3 extends coverage beyond sRGB for green and especially red hues.

Being able to display more colors sounds great, but better color reproduction requires more than a wide-gamut panel. To ensure colors in pictures, movies, and other media are interpreted the same from one device to the next, the intended color space is listed in the file’s metadata. The software being used to view the media needs to read this information and work with the underlying operating system to perform various transformations so that the source colors are rendered correctly (or as close as possible) on the display. Unfortunately, Android does not support this type of color management system; it simply assumes both the source material and the display use the sRGB color space. This means that movies using the DCI-P3 color space will not render properly on the G5 and content using sRGB, which is the standard for computer displays, will have its colors stretched into the G5’s wider gamut, resulting in over saturated, unnatural looking colors.

Color perception is subjective, however. Some people eschew accuracy in favor of these more vibrant colors. There are also situations where higher color saturation improves perceived image quality—outdoors in sunlight or when screen glare reduces contrast, for example.

In the saturation sweep test, which focuses on the dominant sRGB standard, the G5 performs worse than the G4, primarily because the G5’s cooler white point shifts all of the other color hues towards blue. It also appears LG is compensating slightly for the panel’s wider gamut by applying color compression at lower saturation levels, red and magenta in particular. In a way, the G5’s display is a compromise between a proper sRGB mode and a wider gamut. Colors below about 60% saturation fall pretty close to the sRGB target levels, while colors beyond 60% appear more vibrant. Perhaps this is why I do not find the G5’s colors nearly as objectionable as the neon-looking colors some AMOLED wide-gamut displays produce. 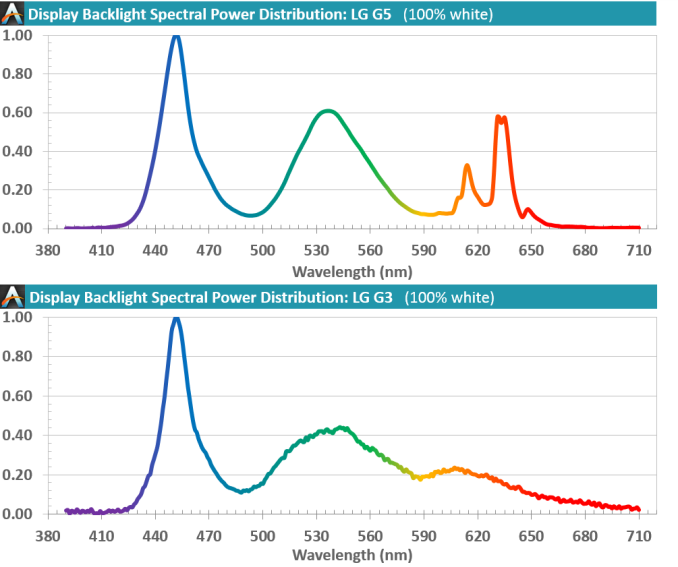 To see how LG’s Quantum Display achieves its wider gamut, we measured the backlight’s spectral power distribution (SPD) with a spectrometer. The LG G3’s backlight shows the typical signature for a panel that covers around 100% of the sRGB color space. The sharp peak around 450nm is the result of using blue LEDs, and the broader, smaller peaks in the green and orange portions of the spectrum are from yellow photoreactive phosphors applied to the LEDs after their light has passed through the screen’s red and green color filters (the wavelengths emitted by the blue LEDs and yellow phosphors combine into what we perceive as white light).

The G5’s SPD, which looks the same as the G4’s, still shows a sharp peak at 450nm from using blue LEDs, but peaks in the green and red portion of the spectrum are different. To extend gamut coverage, LG is using red and green phosphors instead of a yellow phosphor, which improves the power output from these colors. 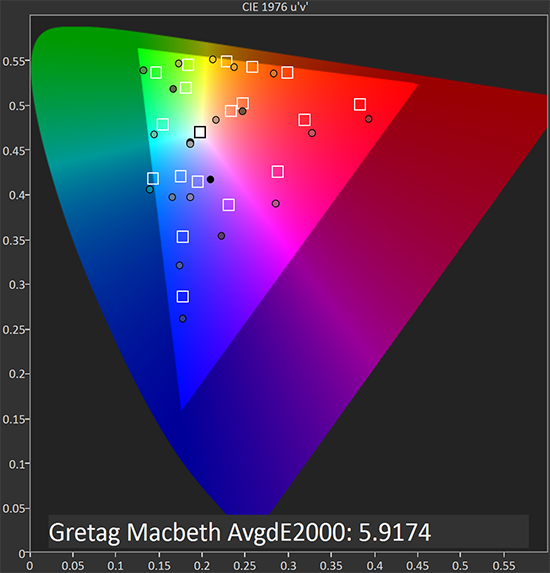 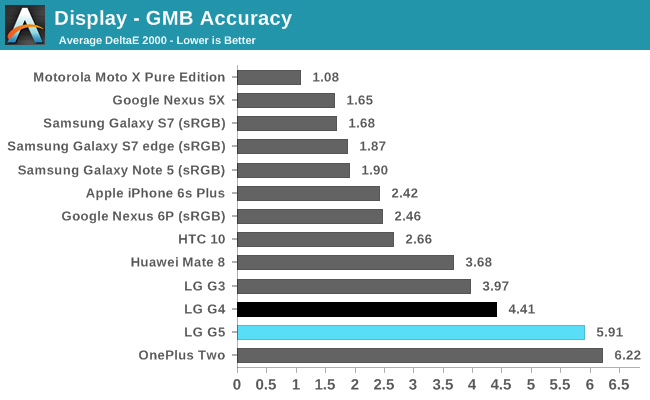 LG is moving in the wrong direction with regards to color accuracy. The G5’s cool white point, wide color gamut, and poor calibration conspire to push average error to an unacceptable level for a flagship device.

The G5’s LG-sourced display has good black levels and a high contrast ratio. Its viewing angles are also what we expect from an IPS display, avoiding the excessive contrast shift seen from the JDI-sourced unit in the G4. Unfortunately, this is where the good news ends. The G5 performs poorly in all of our grayscale and color accuracy tests. And while the screen reaches an amazing 800 nits with auto-brightness enabled, this only lasts for a couple of minutes. Afterwards, you’re stuck with a less than average 405 nits. 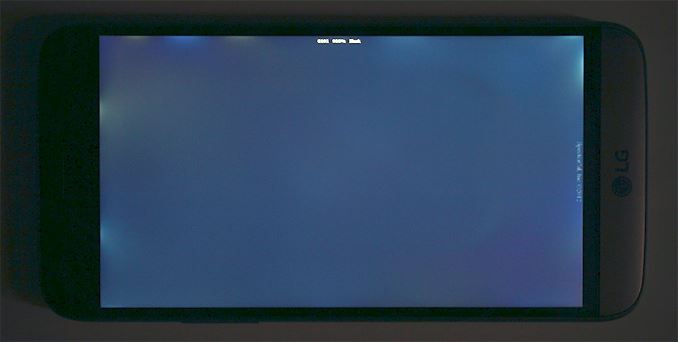 Both of the G5’s we examined suffer from light leakage along the top and bottom edges of the screen. Not enough to ruin our experience using the phones, but it’s definitely noticeable when watching dark scenes in movies or when using the black background for the home row buttons. Backlight uniformity is not great either, although it’s not really noticeable on such a small screen in everyday use.

LG’s flagship phones should be a showcase for its display technology. Instead, the G5, like its predecessors, is saddled with a compromised panel that excels in a few areas, but falls woefully short in others. The G5’s display is far from the worst we’ve seen, but we simply expect more from a flagship device in this price range.