Networking and storage are two major aspects which influence our experience with any computing system. This section presents results from our evaluation of these aspects in the Intel NUC6i5SYK. The NUC supports both M.2 SATA SSDs and M.2 PCIe SSDs (2242 / 2280). NVMe is also supported and provides the best possible performance. One of the evaluation options is a repetition of our strenuous SSD review tests on the drive in the PC. Fortunately, to avoid that overkill, PCMark 8 has a storage bench where certain common workloads such as loading games and document processing are replayed on the target drive. Results are presented in two forms, one being a benchmark number and the other, a bandwidth figure. We ran the PCMark 8 storage bench on selected PCs and the results are presented below.

Note that the problems we encountered with PCMark 8 and NVMe SSDs in a previous NUC review has been fixed now (by an update to PCMark 8). The benchmark now brings the full performance of the NVMe SSD to the forefront, yielding leading numbers in both the storage bench score as well as bandwidth. Unlike Broadwell-U, the M.2 SSD can interface with the Skylake package using a PCIe 3.0 x4 link (instead of PCIe 2.0 x4). 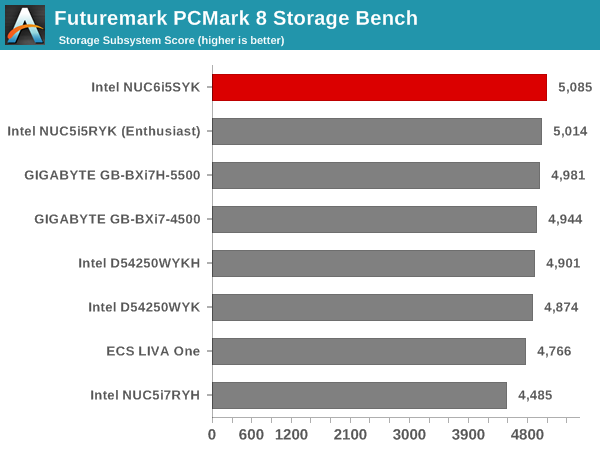 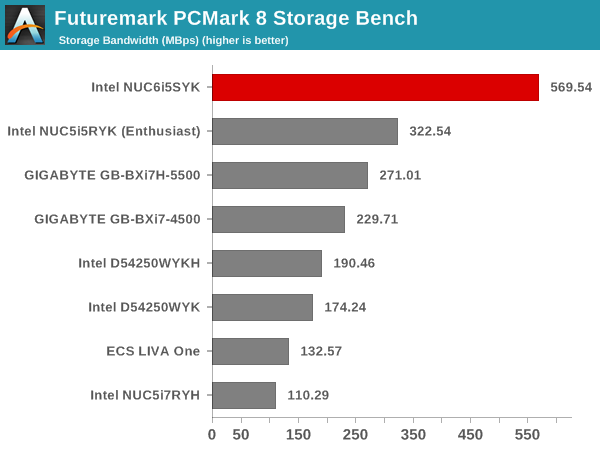 On the networking side, we restricted ourselves to the evaluation of the WLAN component. Our standard test router is the Netgear R7000 Nighthawk configured with both 2.4 GHz and 5 GHz networks. The router is placed approximately 20 ft. away, separated by a drywall (as in a typical US building). A wired client is connected to the R7000 and serves as one endpoint for iperf evaluation. The PC under test is made to connect to either the 5 GHz (preferred) or 2.4 GHz SSID and iperf tests are conducted for both TCP and UDP transfers. It is ensured that the PC under test is the only wireless client for the Netgear R7000.

The WLAN functionality in the NUC6i5SYK is handled by the Intel AC8260 2x2 802.11ac chipset. While the number of spatial streams supported is the same as the AC7265 used in the Broadwell NUCs, the AC8260 integrates Bluetooth 4.2 (compared to Bluetooth 4.0 in the AC7265). 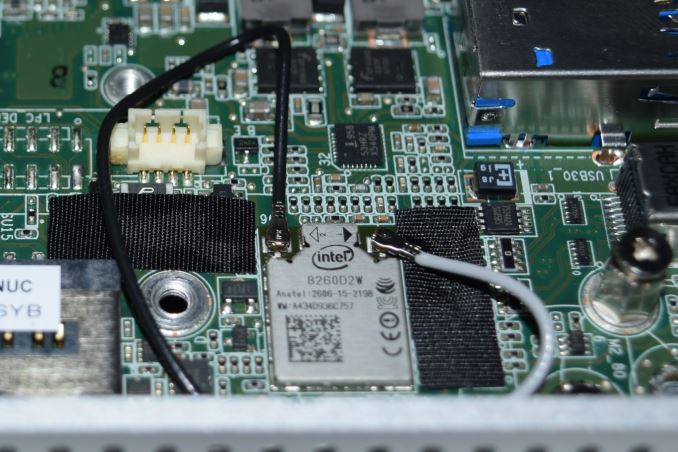 We evaluate total throughput for up to 32 simultaneous TCP connections using iperf and present the highest number in the graph below. 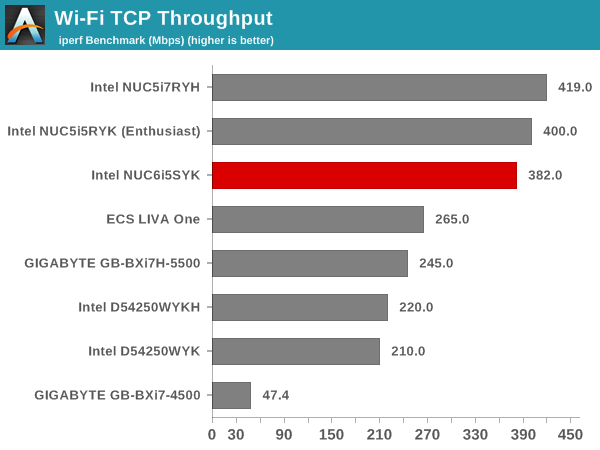 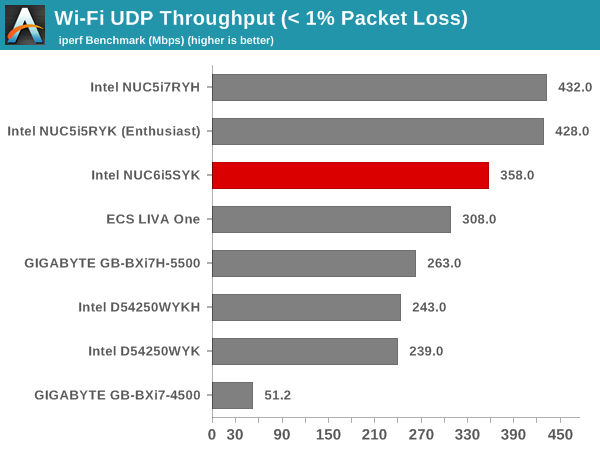 The benchmark numbers in both cases point to a retrogression in performance compared to the previous-generation AC7265 used in the Intel NUC5i5RYK and NUC5i7RYH. In addition, we ran into a strange issue with the WLAN component. Occasionally after startup, the Wi-Fi adapter wouldn't see any 5 GHz networks to connect to. Repeated restarts helped in resolving the problem. Apparently, we are not alone in noticing this behavior. Intel has also been able to recreate the problem at their end and efforts are on to resolve it.