An interesting aspect of these types of DAS units is performance consistency. Aspects that may influence this include thermal throttling and firmware caps on access rates to avoid overheating or other similar scenarios. This aspect is an important one, as the last thing that users want to see when copying over, say, 100 GB of data to the external, is the transfer rate going to USB 2.0 speeds. In order to identify whether the drive under test suffers from this problem, we instrumented our robocopy DAS benchmark suite to record the flash drive's read and write transfer rates while the robocopy process took place in the background. For supported drives, we also recorded the internal temperature of the drive during the process. The graphs below show the speeds observed during our real-world DAS suite processing. The first three sets of writes and reads correspond to the photos suite. A small gap (for the transfer of the videos suite from the primary drive to the RAM drive) is followed by three sets for the next data set. Another small RAM-drive transfer gap is followed by three sets for the Blu-ray folder.

An important point to note here is that each of the first three blue and green areas correspond to 15.6 GB of writes and reads respectively. Throttling, if any, is apparent within the processing of the photos suite itself. It is obvious that the transfer rates are quite consistent and there is no throttling at play here, unlike the T1. In addition, the T3 also manages to remain a full 20C below the T1 for the same workloads. While the T1 reached a toasty 75C internally after more than 250 GB of continuous reads and writes, the T3 only reaches 54C for the same. 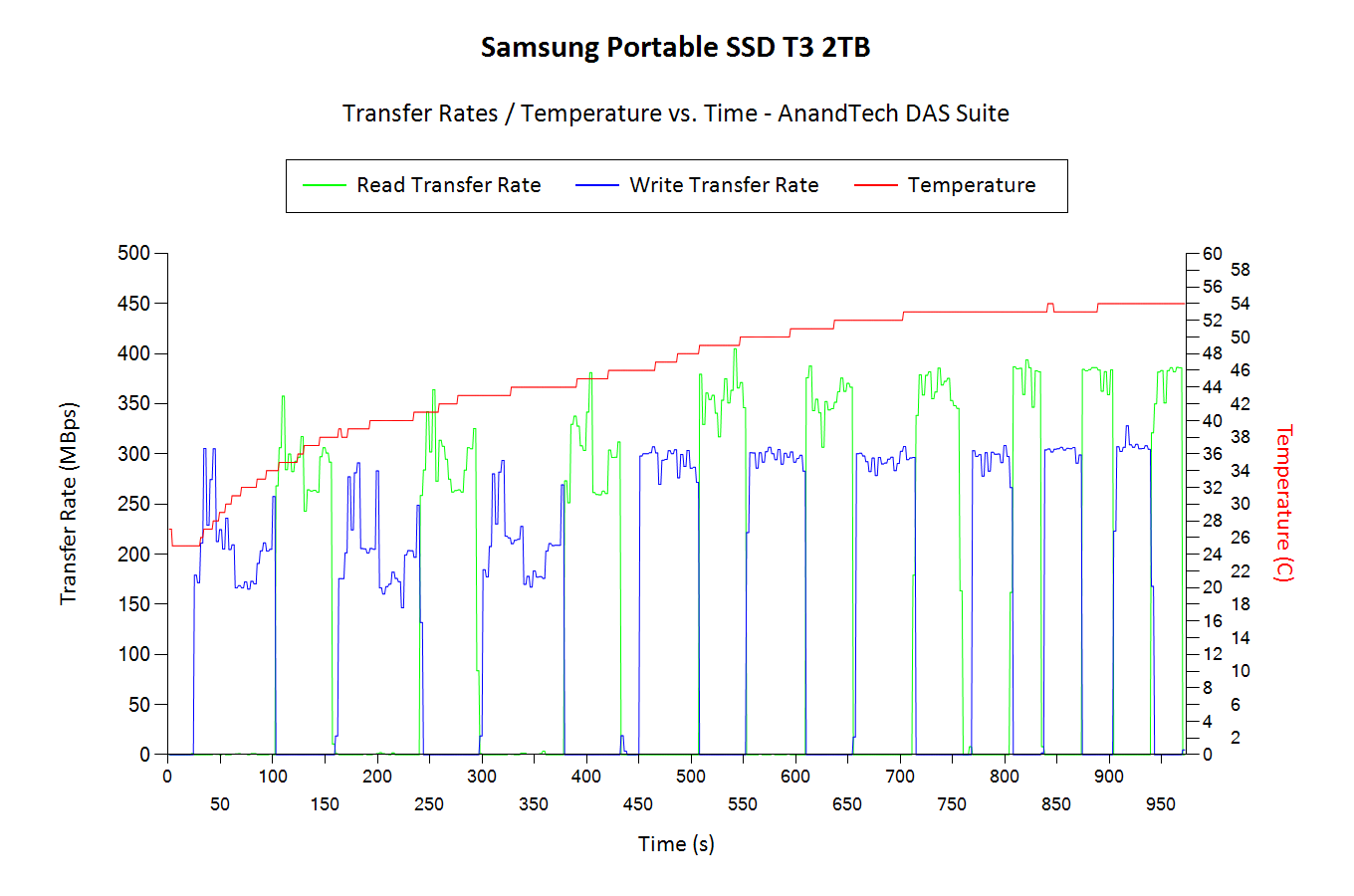 The Samsung Portable SSD T3 is a unique product - it is the only palm-sized bus-powered direct-attached storage unit with a 2TB capacity in the market right now. In addition to the 2TB capacity (priced at $850), we also have the 1TB, 500GB and 250GB variants at $430, $220 and $130 respectively. 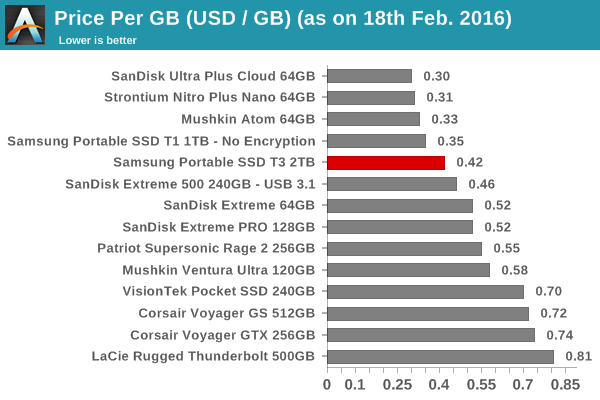 The closest competitor to the Samsung Portable SSD T3 is SanDisk's 1.92TB Extreme 900 Portable SSD. At $800, it is a bit cheaper, but has a bigger footprint compared to the T3. The Extreme 900 also comes with a USB 3.1 Gen 2 interface and boasts speeds of up to 850 MBps compared to the T3's 450 MBps. These are aspects that we would like Samsung to consider for the next iteration. In a bus-powered enclosure, it is difficult to incorporate PCIe SSDs. However, it would have been really nice to have a faster version to go along with the capacity bump in this generation. The slight retrogression in performance over the T1 is also a small cause for concern. In terms of usage on mobile platforms, it would be nice to have exFAT access capabilities in the Android app. In addition to the provided Type-C to Type-A cable, we would have also liked a Type-C to Type-C cable for the price of the unit. Even though the price per GB ($0.425/GB) is lower than the T1's at launch ($0.60/GB), the recent trend towards cheaper flash memory makes it a bit difficult to digest the premium.

Other than the above aspects, there is really nothing much to complain about the T3. The thermal characteristics are excellent (way better than that of the T1). There are plenty of thermal pads protecting the flash packages. The construction of the unit should help it withstand rugged handling conditions that such a small unit is bound to undergo. The metal enclosure helps in heat dissipation and also provides a more premium feel compared to the all-plastic T1. The AES-256 encryption process / password protection works seamlessly (unlike the T1, where the unit had a separate FAT32 partition), even in Android. The flash density is unparalleled. Anyone looking for a secure high-capacity, small-sized direct-attached storage unit would do little wrong in going with the Samsung Portable SSD T3, as long as the price premium is acceptable.