Ever since the initial announcement of the VISC architecture in 2014 there has been a element of it sounding too good to be true, and Soft Machines' 2016 announcements have come with yet more questions as well. Aside from questions requiring more information about the architecture and ISA, the big money questions relate to performance. We mentioned a couple of pages back that the original 28nm design made its way to silicon at 500 MHz and was shown as a proof of concept. At the 2014 conference, the platform was compared to both ARM and x86 and offered better scores on Denbench compared to both while also using less power. Now that Shasta is on the 16nm node, the big question is how the new design at a 2 GHz frequency compares, and if the increase in frequency has upset some of the IPC gains.

So it’s at this point that we have to show this graph before we can progress any further. This is a graph which has caused a lot of commotion among the analyst community, because it can be a very difficult graph to digest and work out what is going on. I’ll take you through it. But to start, ignore the vertical dashed lines. 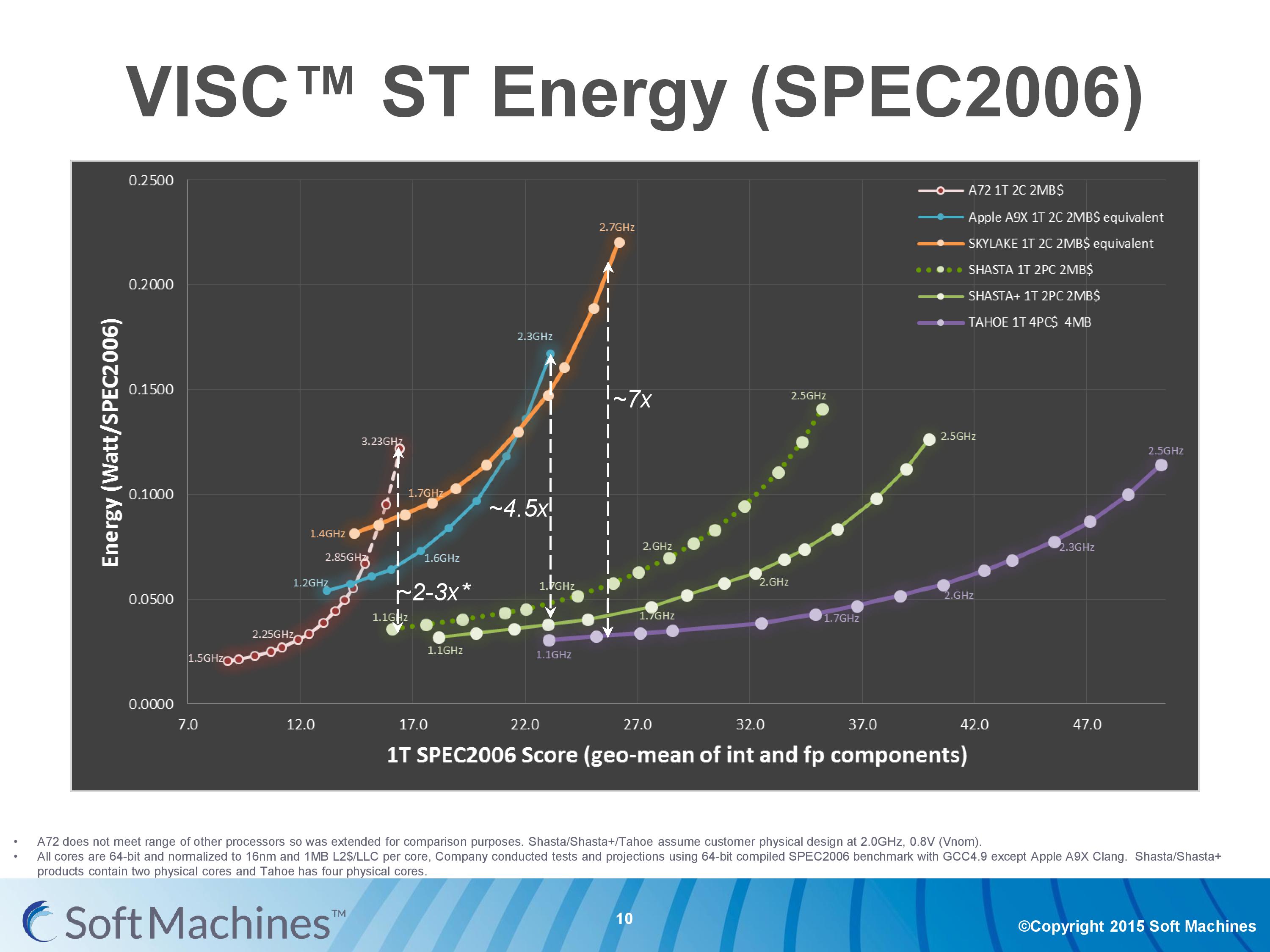 This is a graph from Soft Machines attempting to show the efficiency of several CPUs cores: Cortex-A72, Apple’s Twister (A9X), Skylake, Shasta, Shasta+ (2017), and Tahoe (2018). It is a graph of the average power consumed per unit SPEC2006 score plotted against the SPEC2006 score, and each dot on a line shows the relative score of each CPU at a given frequency.

The reason why this graph has caused a lot of commotion is that it shows a lot of data based on a lot of assumptions displayed in a very odd way. The following points are worth mentioning

Typically any one of these points in most contexts would be grounds to be apprehensive about the results. The fact that there are nine salient points here listed (and I may even have missed one or two) means that the data should be thrown out entirely.

Clarification on the Data from Soft Machines

Because we were one of the last media outlets to speak with Soft Machines, and I had already seen some discussion around these points, I posed the issues back to them, as well as a few questions of my own. Because of the response that had been presented, we managed to get a lot of details around the simulation and assumptions aspects. So to start, here’s the testing methodology that everyone was provided with: 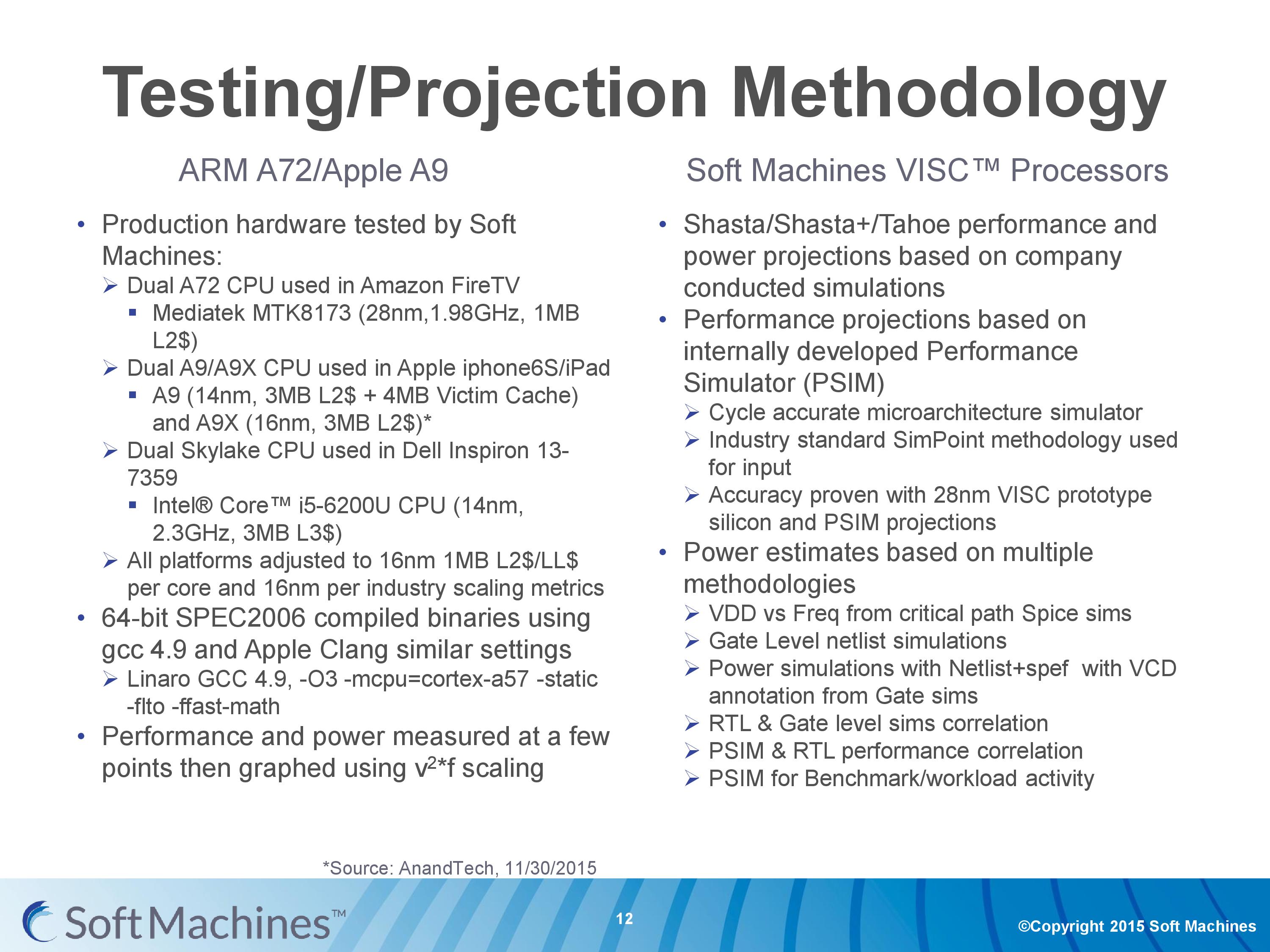 For clarity on the VISC processors, simulations were done to be both signal accurate and cycle accurate, and data taken from 16nm design configurations. Both power and results were taken from these.

For the power on the other parts, the power consumption was taken at the wall. To remove system power from the equation, the system was run in 2C vs 1C modes and 1C vs idle modes at various frequencies to find the dynamic power. Each platform was tested in a cold environment to ensure the maximum temperature did not go above 55C. Each of the power numbers are estimates that have removed the production yield ‘guard’ (i.e. protection overestimate), which was about ~15%, giving benefits to the non-VISC core results.

For the power conversion to 16nm FinFET+ on TSMC:

For a full rundown, this was the slide provided to us: 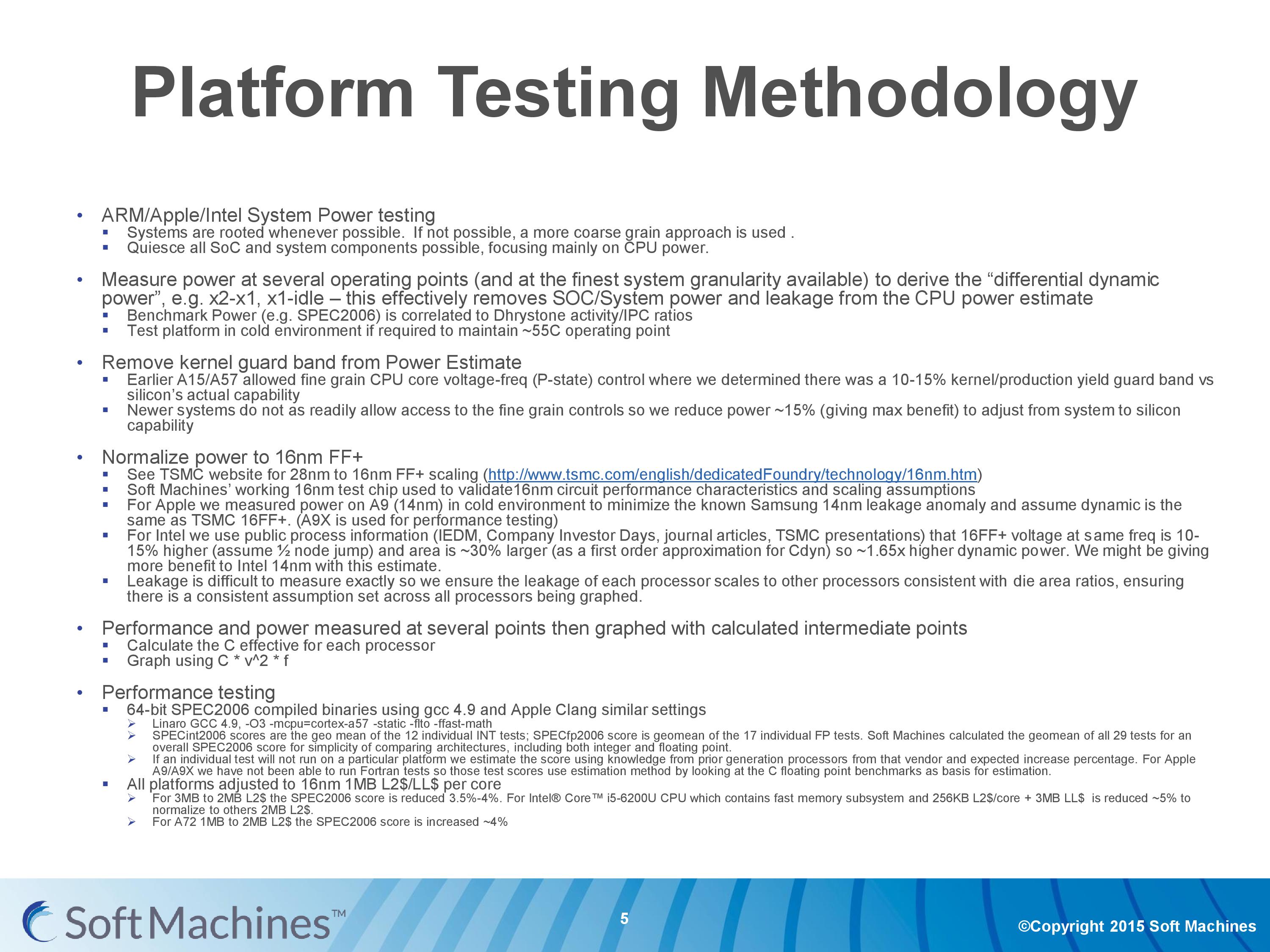 As part of these assumptions, I did ask about the raw data collected and if that would ever be presented. I did mention that they really need to split up INT and FP results, and I was told that it may happen at a later date but not right now. What I was given though was the effect of the cache adjustment on Skylake. 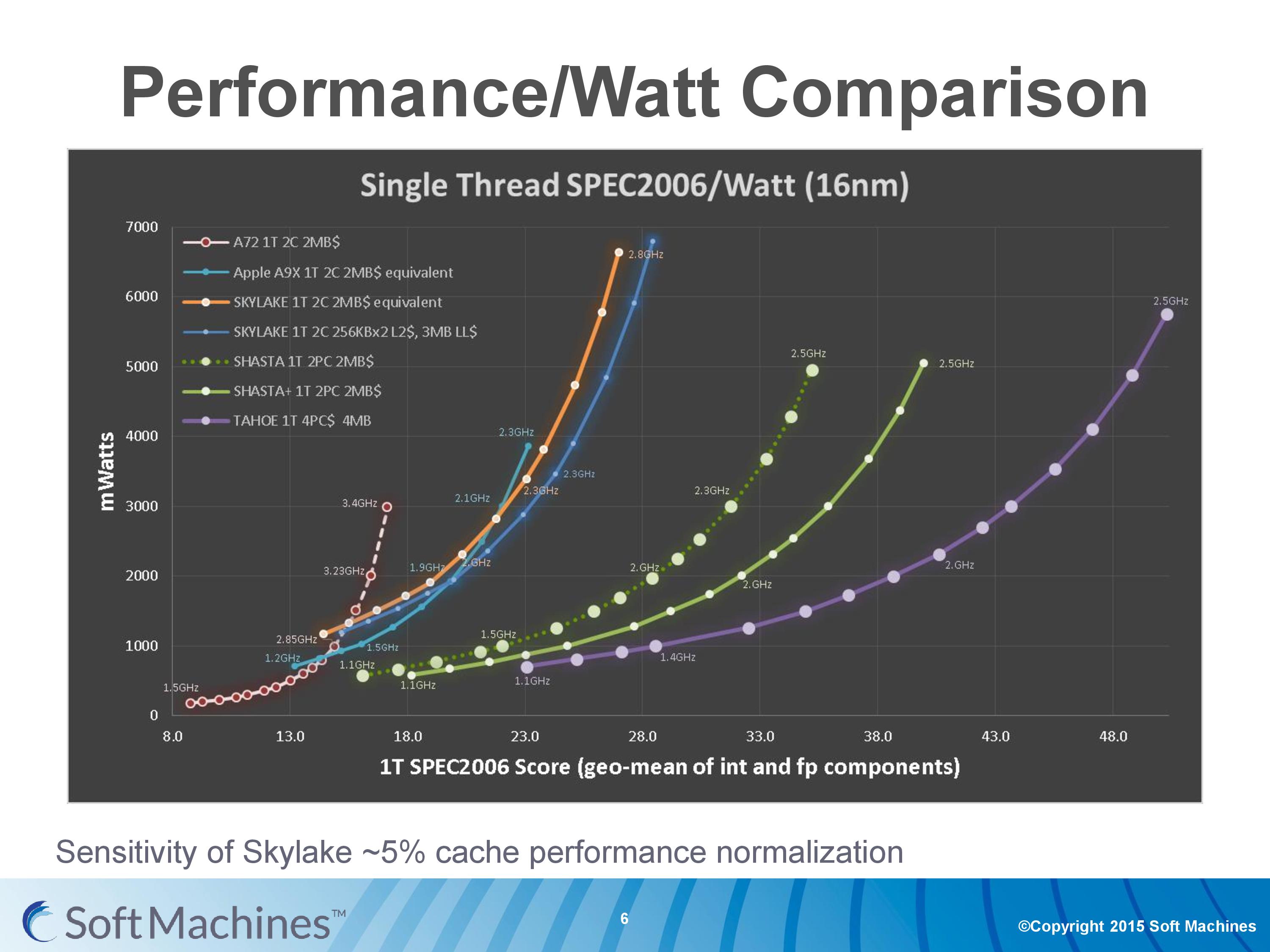 The orange line and the blue line next to it represents the movement from a multi-cache hierarchy of L2+L3 to 1MB of L2 cache per core only. The blue line still has the assumption of moving from 14nm to 16FF+, and using the GCC compiler, but the orange line has that extra assumpton.

Personally, these assumptions make me uneasy. Conversions like this are typically only done as back-of-the-envelope types of calculations during the early stages of design, because they are very rough and do not take into account things like silicon floor-plan optimization that would occur if you chose a smaller/larger cache arrangement, or changing from 8-way to 4-way associativity in the caches and so on. Typically we see companies in similar positions to SMI provide the raw or semi-modified data, using one assumption at most, with a split between FP and INT results - e.g. taking all the results as-is with GCC. The reason why it all comes into one graph is for brief simplicity, which doesn't particularly endear any reader/investor who might decide to be heavily invested in this project.

We pointed out a lot of concerns with this data to Soft Machines, including the list above of assumptions and how some of them simply do not make sense and should be restricted to that those quick rough calculations, especially when presenting at a conference. They gave us the graph above showing the effect of cache changes on Skylake, but I have asked in the future for them to display the data in a less complicated way, using standard industry metrics (such as INT or FP). Ideally the graphs are also kept to two or three data sets without requiring a 9-point interpretation scheme to understand what is happening - we typically get a dozen or so graphs from Huawei, ARM, AMD or Intel when they are describing their latest architecture or microarchitecture designs. This allows more understanding of what is happening under the hood and can be used to validate the results - as it stands, it is difficult to validate anything due to the assumptions and conversions made.