The Huawei P8 Lite has a 5.0" 1280x720 IPS display. We've seen great improvements to both display resolution and color accuracy in recent years, and you can now get highly accurate 720p panels in devices that cost only $150-$200. Some devices even manage to squeeze a 1080p panel onto a $200 device. Since competing on resolution has become difficult, targeting greater color accuracy has become the next step of display improvements. To evaluate the accuracy of the P8 Lite's display we turn to our standard smartphone display workflow. As always, measurements are performed with X-Rite's i1Pro 2 spectrophotometer and SpectraCal's CalMAN 5 software, with the exception of contrast measurements which are done with an i1Display Pro colorimeter. 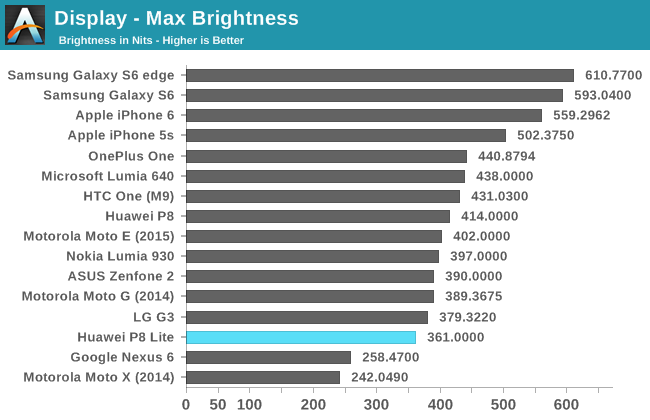 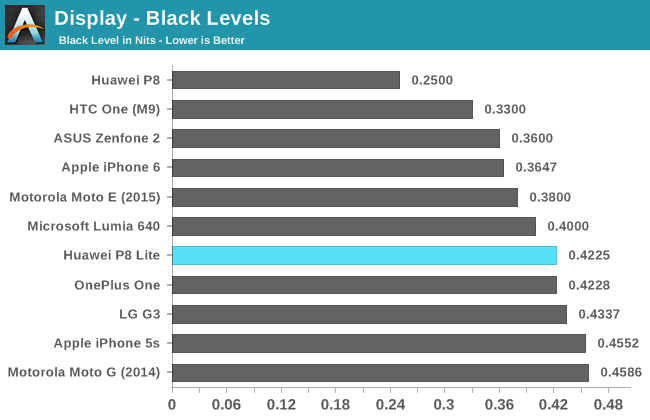 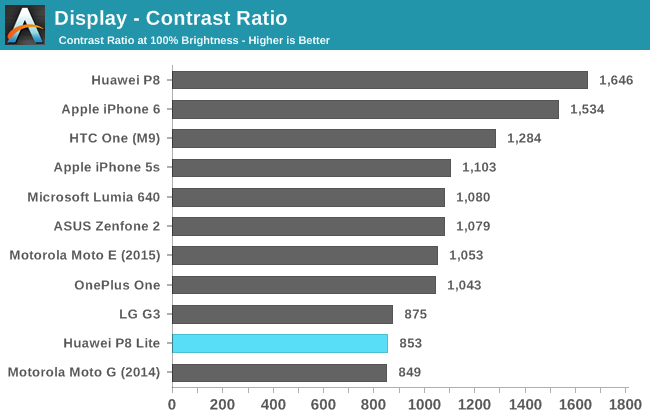 At 361 nits, the P8 Lite's display isn't quite as bright as I would expect. Despite this, the black level is fairly high, which leads to one of the lower contrast ratios on record. At this point having your brightness far below 400 nits is really not acceptable, as it makes the device very difficult to use in the sun or with other unforgiving lighting. The high black level also means that the wash out from external lighting is even more noticable. 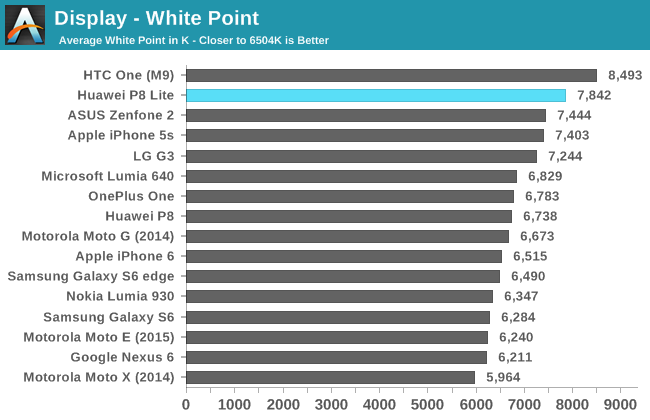 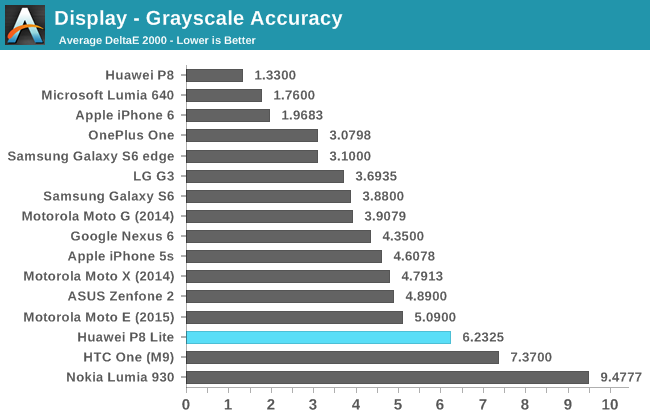 Greyscale results from the P8 Lite also end up being less than optimal. With a price point of $249, Huawei is within the mid-range segment of the market. Devices like the Lumia 640 have shown that it's completely possible to ship an accurate display even with price constraints. The P8 Lite's display is far too blue, and there's a high degree of error in shades of grey which increases as they move toward complete white. 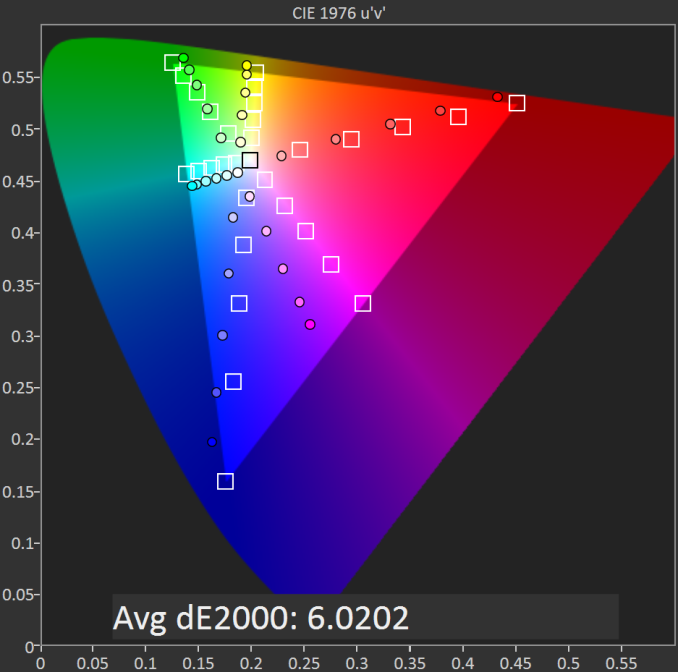 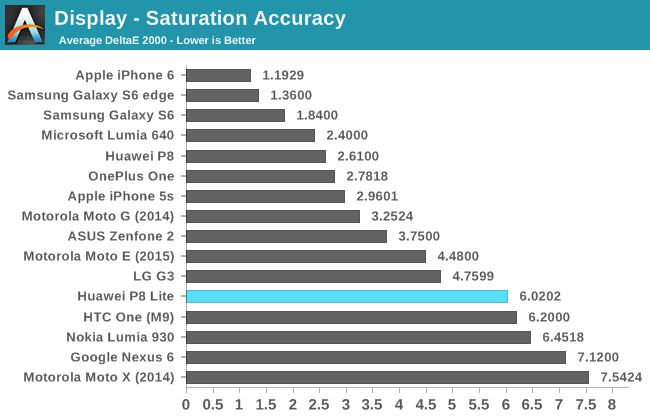 The P8 Lite again performs poorly in the saturation sweep test. Blue shows some saturation compression, with slight oversaturation until it hits 80% and then undersaturation for the deepest shades of blue. Magenta misses the mark severely, with 20% magenta actually being what would be a very accurate 20% blue. The level of inaccuracy is high enough to be fairly evident throughout the UI, which is very disappointing. 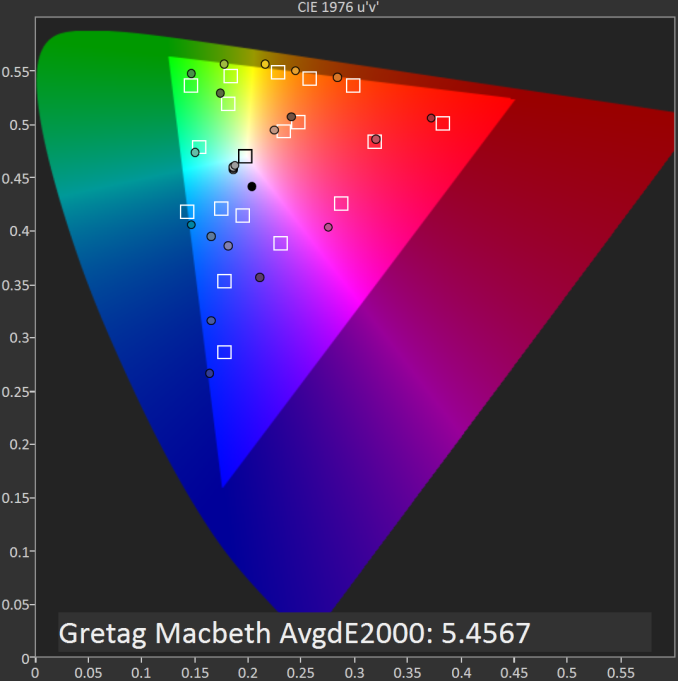 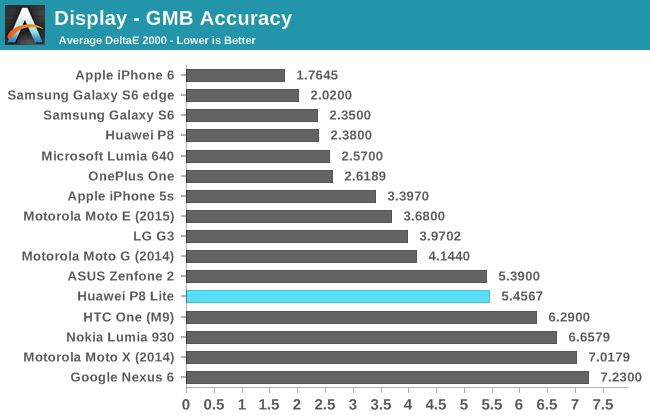 In the ColorChecker test the P8 Lite again doesn't do very well. The inaccuracy with both the greyscale and the primary and secondary colors means there's not much hope of rendering color mixtures accurately. As you can see in the color comparator image, there's a high level of error in everything except the greens and cyan. It's fairly clear when looking at images or videos that they don't look quite right.

Overall, the P8 Lites display is fairly disappointing. We've seen great improvement in display quality in the low end and mid range parts of the market, with $149 devices like the Lumia 640 providing very high accuracy and good sharpness, and the ASUS Zenfone 2 providing decent accuracy and a very high resolution. The 5.0" 720p display on the P8 Lite is decently sharp, but the inaccuracy is significant.