The power consumption at the wall was measured with a 1080p display being driven through the HDMI port. In the graphs below, we compare the idle and load power of the Intel NUC5i5RYK (Enthusiast) with other low power PCs evaluated before. For load power consumption, we ran Furmark 1.12.0 and Prime95 v27.9 together. The numbers are not beyond the realm of reason for the combination of hardware components in the machine. 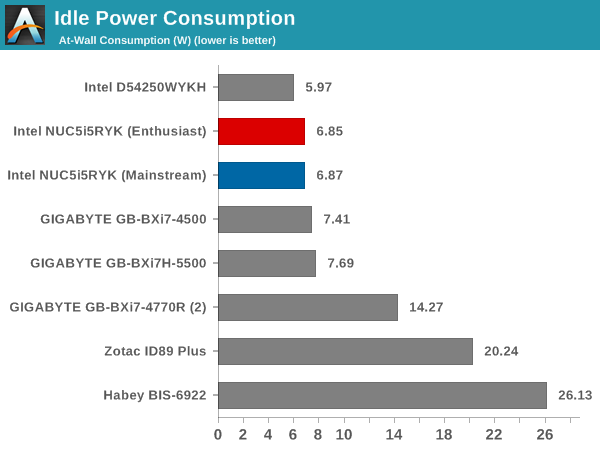 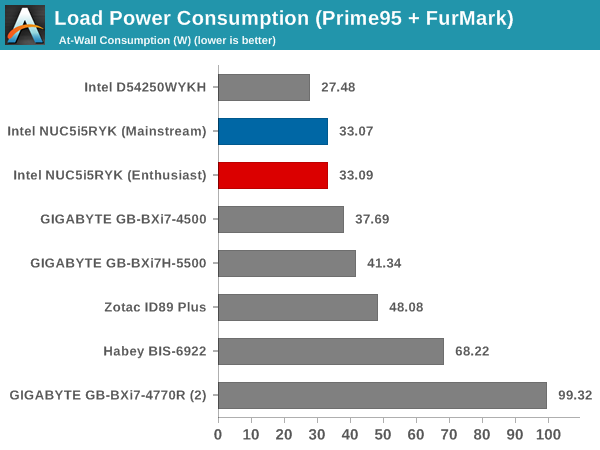 By default, the BIOS puts the unit in the maximum power consumption / performance mode. The above numbers are with those default settings. It is possible for the end-user to drive down the numbers further with tweaks in the BIOS (at the cost of performance)

In terms of thermal design, the NUC5i5RYK is no different from the Haswell NUC. There are ventilation slots on the side and a small fan directly beneath the lid helps draw in air over the heatsink that is placed behind the slots. On the other side, the lid has a thermal protection strip adhered to it such that it gets placed directly over the M.2 SSD. This ensures proper cooling for the storage media (an issue that one of the previous generation NUCs faced). In order to evaluate the thermal performance, we started with the system at idle, followed by 30 minutes of pure CPU loading. This was followed by another 30 minutes of both CPU and GPU being loaded simultaneously. After this, the CPU load was removed, allowing the GPU to be loaded alone for another 30 minutes. 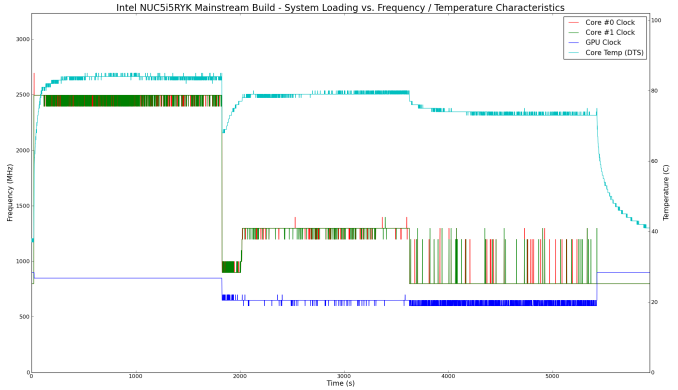 In the pure CPU loading scenario, the cpre frequencies stay well above the suggested base value of 1.6 GHz, thanks to the BIOS setting controlling the maximum allowed sustained power consumption. The turbo burst frequency of 2.7 GHz is observed only very briefly, and the cores settle down to between 2.4 and 2.5 GHz. We see the temperature stabilizing slightly above 80 C (despite the junction temperature being 105 C). On the other hand, when the CPU and GPU are both loaded, the frequencies drop down to around 1.3 GHz for the cores. The GPU is advertised to run at a base clock of 300 MHz, with a turbo mode of 950 MHz. The actual frequency stays above 700 MHz comfortably throughout our stress test. In the absence of any CPU load, the cores drop down to 800 MHz. The temperatures are also below 80 C throughout the time that the GPU is loaded up. The behavior of the clocks is similar to what we observed for the GIGABYTE Broadwell BRIX s. 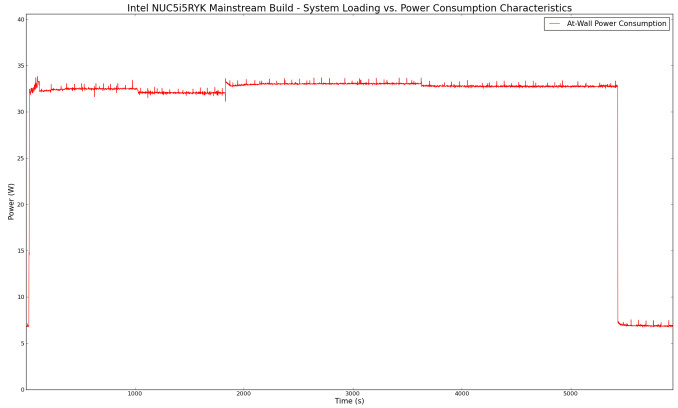 The above graph presents the power consumption at the wall during the above thermal stress run. This shows that Intel has designed the NUC with a certain maximum power budget in mind, and the clocks of the CPU and GPU are adjusted depending on the load to obey that configurable TDP. One interesting aspect is that the GPU clock at idle is always reported to be 900 MHz by various tools. We assume there is some sort of inner clock-gating going on beyond the observation point. Otherwise, it is possible to drive down the idle power consumption even further. The thermal performance of the enthusiast build was along the same lines, with a cap of around 34 W for the maximum power consumption at the wall.

All in all, the thermal solution is very effective. Given that the acoustic side-effects were not irksome (subjectively) and the temperature of the CPU package was well under the junction temperature limits, we wonder if Intel has missed a trick by dialing down the overclocking and not allowing the full performance potential of the system to come through with the default BIOS settings.