The NUC5i5RYK is a UCFF PC, but, thanks to the 15W TDP CPU inside, it doesn't require a noisy thermal solution. Subjectively speaking, the unit is silent for most common HTPC use-cases. Only under heavy CPU / GPU loading does the fan become audible. In our investigation, recent software improvements in the software chain for playback on Windows have lightened the stress considerably. The NUC5i5RYK definitely makes a good HTPC for folks who don't want to pay the premium for a passively cooled system.

Starting with Haswell, Intel, AMD and NVIDIA have been on par with respect to display refresh rate accuracy. The most important refresh rate for videophiles is obviously 23.976 Hz (the 23 Hz setting). As expected, the Intel NUC5i5RYK has no trouble with refreshing the display appropriately in this setting. 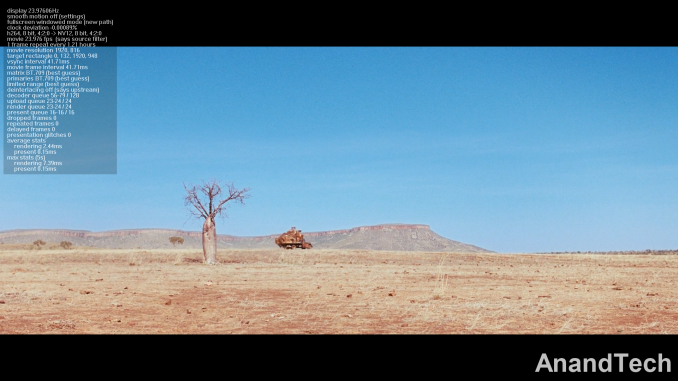 Evaluation of OTT playback efficiency was done by playing back our standard YouTube test stream and five minutes from our standard Netflix test title. Using HTML5, the YouTube stream plays back a 720p encoding. Since YouTube now defaults to HTML5 for video playback, we have stopped evaluating Adobe Flash acceleration. Note that only NVIDIA exposes GPU and VPU loads separately. Both Intel and AMD bundle the decoder load along with the GPU load. The following two graphs show the power consumption at the wall for playback of the HTML5 stream in Mozilla Firefox (v 35.0.1). 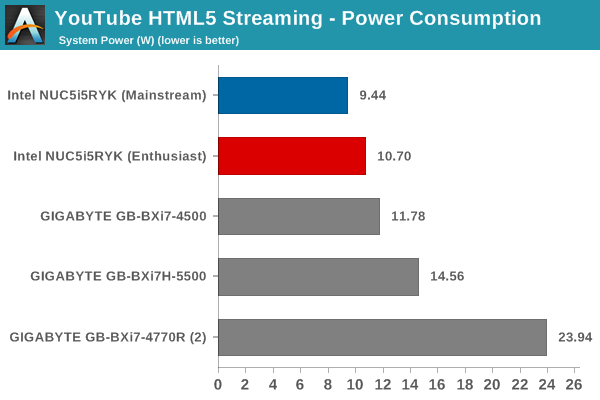 GPU load was around 13.46% for the YouTube HTML5 stream and 2.92% for the steady state 6 Mbps Netflix streaming case. 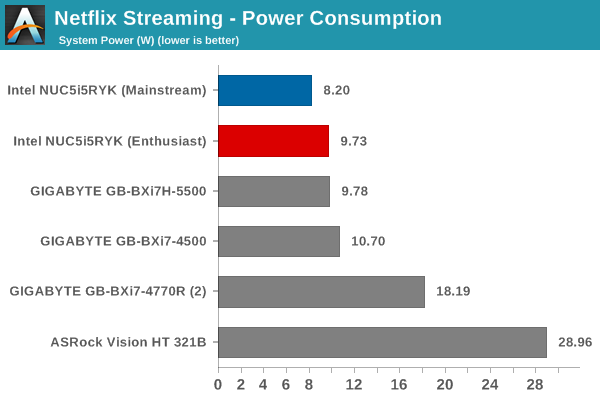 For similar OTT streaming workloads, the NUC5i5RYK unit consumes slightly lower power at the wall compared to the corresponding Haswell NUC. That said, it is difficult to quantify how much of this is due to Broadwell moving down to 14nm. Other components such as the WLAN adapter, DRAM and even the power supply have changed between the two compared units. That said, the Core i5 U-based Broadwell NUC is more power-efficient for these workloads compared to the Core i7 U-based BRIX units.

In order to evaluate local file playback, we concentrate on EVR-CP and madVR using the mainstream configuration (which has the 1600 MHz DRAM). We already know that EVR works quite well even with the Intel IGP for our test streams. In our Broadwell BRIX s review, we found the HD Graphics 5500 to be incapable of downscaling 4kp30 to 1080p using default madVR settings. We didn't have much hopes for HD Graphics 6000 and our fears were confirmed when similar results were obtained with the NUC5i5RYK initially using the LAV Filters DXVA 2 Copy-Back mode in MPC-HC 1.7.8.

One of the odd aspects that we found in the course of the 4kp30 playback and downscaling process using madVR was that the GPU loading never went above 70%, but approximately half the frames were getting dropped. A careful analysis of the OSD revealed that the split queue was simply not able to keep up (with queues prior to that in the OSD being kept close to full). madVR's split queue copies the decoded frames from the GPU RAM to system RAM and then back to GPU RAM. However, this process seemed to be too slow for 4Kp30 content on the Intel IGP. Just as we were about to wrap up testing of the decoding and rendering aspects, LAV Filters 0.64 was released with huge improvements in DXVA Copy-Back performance. We repeated our benchmarks after overriding the in-built LAV filters of MPC-HC 1.7.8 with LAV Filters 0.64. 4Kp30 downscaling with madVR default settings worked without any dropped frames.

Usually, we suggest usage of the QuickSync decoder built into LAV Video Decoder whenever playback with an Intel IGP machine is desired. However, HEVC decode acceleration using DXVA (implemented partially in software) is available only in the DXVA2N and DXVA2 Copy-Back modes for Broadwell. Hence, we no longer recommend setting the default codec in LAV Video Decoder to Intel QuickSync.

In our earlier reviews, we focused on presenting the GPU loading and power consumption at the wall in a table (with problematic streams in bold). This time around, we decided to represent the GPU load and power consumption in a graph with dual Y-axes. Nine different test streams of 90 seconds each were played back with a gap of 30 seconds between each of them. The characteristics of each stream are annotated at the bottom of the graph. Note that the GPU usage is graphed in red and needs to be considered against the left axis, while the at-wall power consumption is graphed in green and needs to be considered against the right axis. 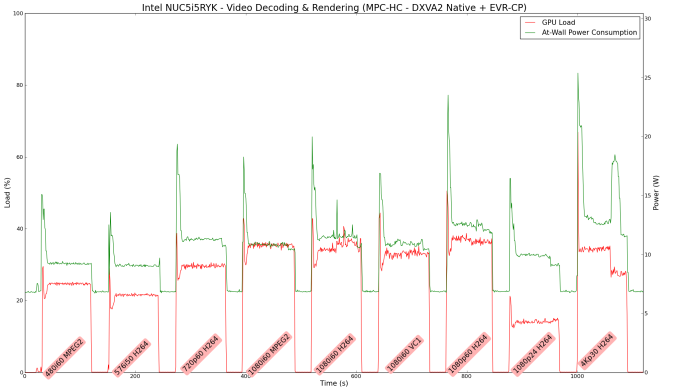 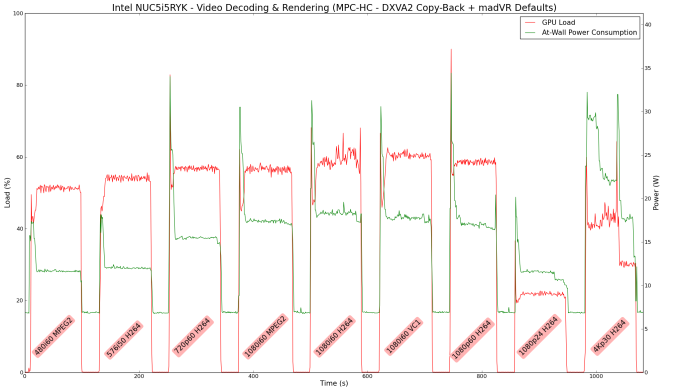 Points of concern would be GPU loading being consistently above 85 - 90%, but there is no such case in the two scenarios tested above. Power consumption at the wall is less than 15 W for even the most complicated streams when using EVR-CP, while madVR with DXVA2 Copy-Back decoding averages around 20 W for the higher complexity streams involving scaling for fast frame rate or high-resolution content.