ASRock Z97 Extreme6 In The Box

The Z97 Extreme6 is currently the least expensive motherboard we have tested from the 9-series range at $170. At this price point, for P67, we had ASRock motherboards with cables and USB 3.0 front panel devices. However the modern motherboards boards are actually more expensive to make, and with computer cases now supplying four USB 3.0 ports at the front, there is no need for the front panel extras unless they integrate some form of WiFi. Also because the Z97 Extreme6 uses two M.2 and SATAe, the cost of integrating those into the platform might also affect the depth of the bundle. 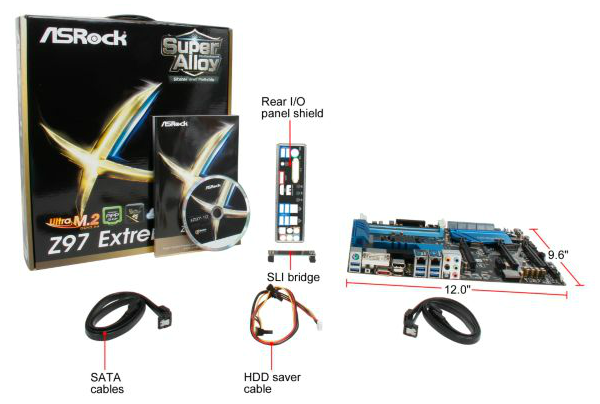 Aside from the HDD Saver cable, which has to be present for the HDD Saver feature, this package is very light. Due to the 10 SATA ports on board, four SATA cables amounts to half should the M.2 x2 be in use, and there is no specific extras to the package that might make the product stand out.

I am pleased with ASRock’s persistence with all the automatic overclock options. It allows users to experiment with the lower overclocks and move up to the more stringent challenges for their expensive silicon. Typically automatic overclock options are also aggressive on voltages, so when a user hits a temperature limit they can manually go in and reduce the voltage as required.

The Power Saving option in A-Tuning is a good idea for extreme power conscious individuals. In general, a lot of what most users do is very brief and takes less than a second to implement on a modern system. By bringing the MHz down and moving the CPU into a more power efficient range, the overall power consumption is lower saving a few cents here and there.

For our manual overclocking we used the BIOS as usual, moving the load line calibration up to Level 1, similar to the extreme auto overclocking, and started from there. We hit 4.6 GHz at 1.3 volts, although this gave a rather toasty 95ºC peak during OCCT in our open test bed. 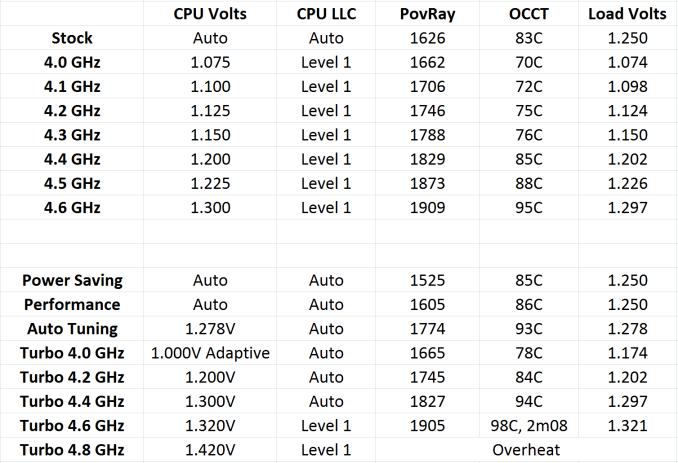