For the most part, ASRock’s Z97 software mirrors that on the Z87, using the A-Tuning interface for pretty much everything and the combination light grey/green tones that contrast to the software from some of the other motherboard manufacturers. Actually the newest part of the package is ASRock’s own application interface, the App Shop. This is essentially a Google Play Store / App Store for ASRock to put in their own choice software, updates to their software, or perhaps a few sponsored items. As shown in the screenshot below, we get several of the standard ASRock software installations as well as Chrome and a few APAC based FTP games: 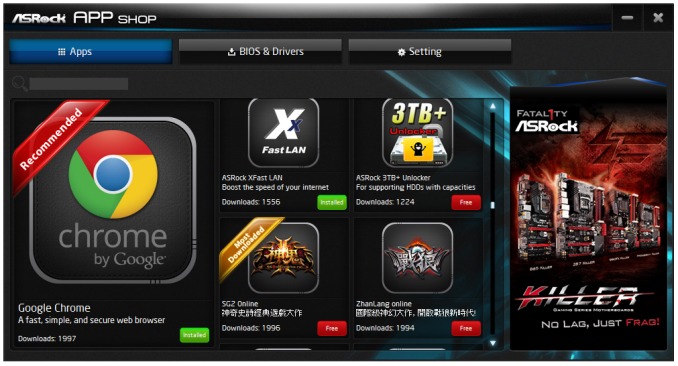 This sets a somewhat worrying precedent in case other manufacturers might do the same. It might not be all bad, given that these are simply PC game installation files to be downloaded, as if you went to the website of the company that made them. There does not seem to be any mechanism for buying applications, so at the minute everything posted on the ASRock App Shop is free.

The App Shop does also offer a system update feature for BIOS and drivers, although it offered none when I attempted to use it: 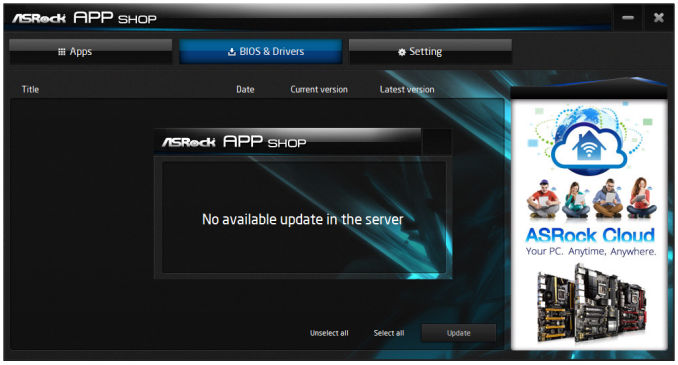 However everything else from ASRock is tunneled through their A-Tuning interface. This is relatively similar to our previous ASRock Z87 reviews where the first screen we come to is the Operation Mode: 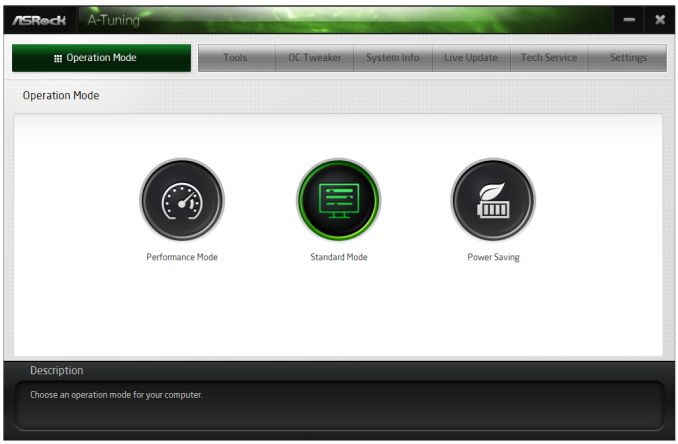 The default position is Standard Mode that will run the CPU as per normal. The Power Saving mode will reduce the CPU to 800 MHz and will slowly ramp the speed up as more performance is needed. It will require a good 10 seconds of full throttle to get to full speed. Performance mode disables any idle states, but also opens up another menu for more options. 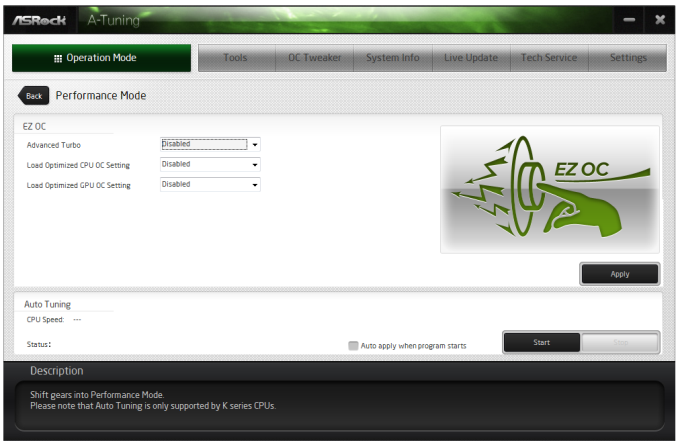 The EZ OC options are similar to those in the BIOS, and Auto Tuning at the bottom will perform a series of overclocking tests to determine an overclock for the system. For us it gave our i7-4770K a 4.3 GHz overclock at 1.278 volts.

The next tab along is the Tools tab, which similarly to the Tools tab in the BIOS is the main hub for all the extra ASRock options. 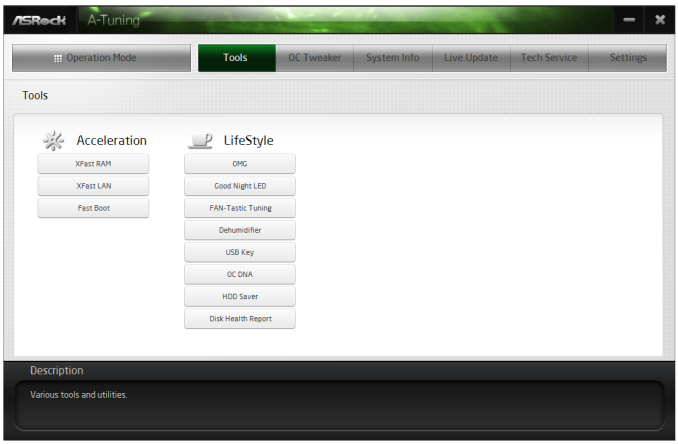 A common theme with almost all motherboard manufacturers is to include some form of RAMDisk software with the motherboard, often negating any pay software currently on the market. The ASRock tool allows users to recover a RAMDisk on boot and allow the RAMDisk to act as a temporary file store, or a regular file store as needed. 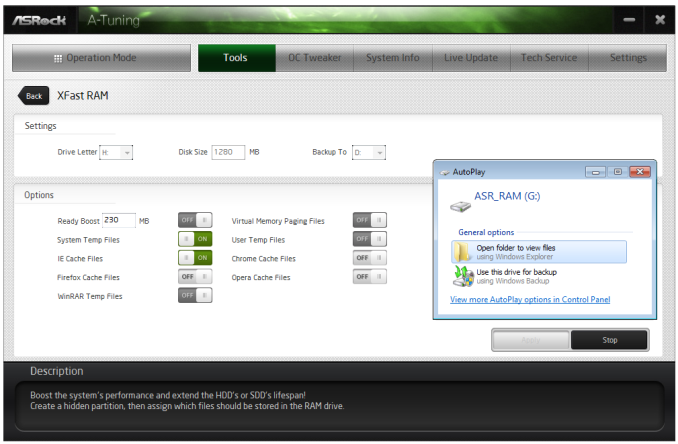 Another theme in motherboard software is to implement some form of network packet prioritization, allowing users to select which programs have network priority (e.g. VOIP over games, games over downloads). Most of these solutions use a custom front end to a cFos back end, as is the case with ASRock: 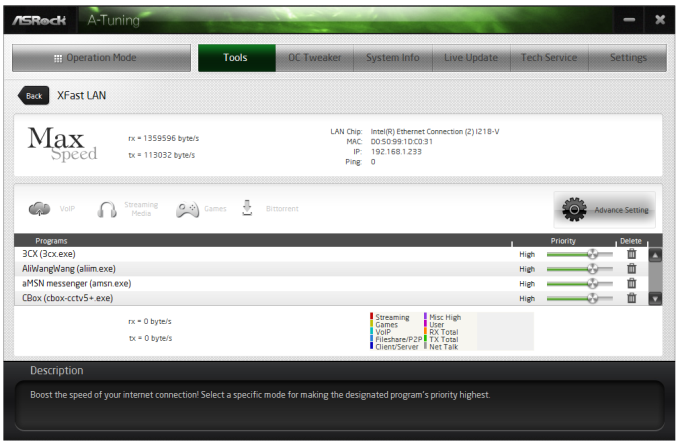 With the new UEFI system implementation, a motherboard can bypass some initialization procedures for devices that conform to UEFI specifications. This also requires a UEFI aware OS, such as Windows 8, to ‘instant’ boot, but other Windows operating systems can take advantage of some optimizations. For Instant Boot users, there is an option here to reboot the system straight into BIOS as well. 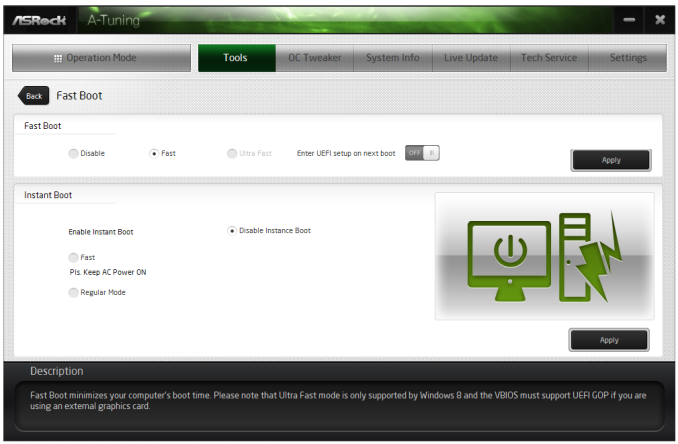 The OMG tool from the BIOS is also available in the software, allowing users to restrict the times when the user can access online functions. In this implementation we also have a password protection system to prevent access. 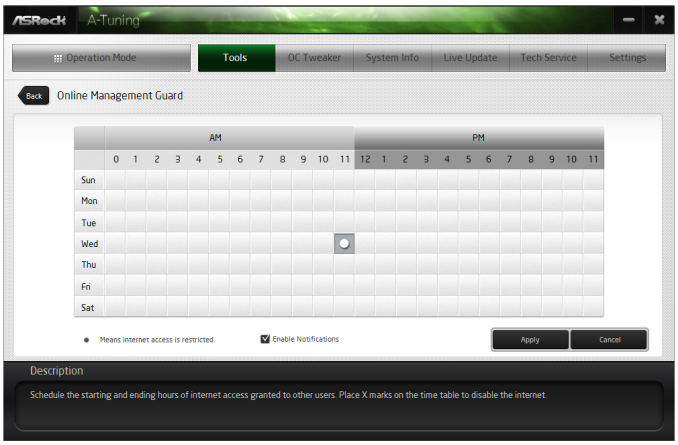 The fan controls for the Z97 Extreme6 use a fan test to provide the user with a power to speed look-up table to help design their fan response profiles. Unlike the BIOS, we cannot select the temperature sensor by which the fan header operates, but like the BIOS ASRock has confused the FAN Speed (%) in the graph with Fan Power in the look-up table. There needs to be some basic mathematics done here to do the conversion and make it physically accurate. 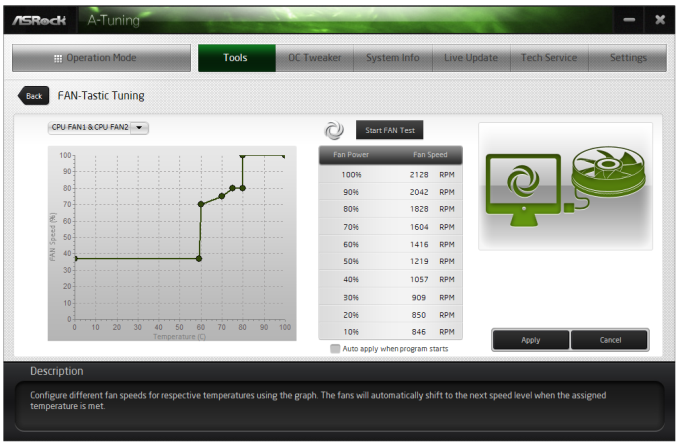 As with the BIOS, the Dehumidifier option in the software allows users to keep fans running after a shutdown for a fixed length of time. 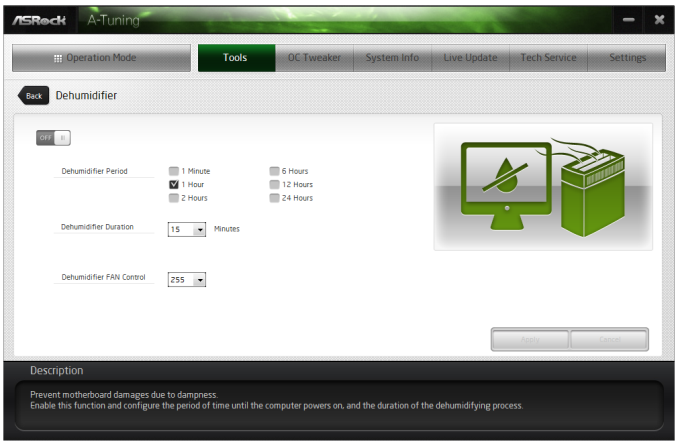 In some environments, logging into a machine requires a USB key to identify the user. ASRock’s USB Key does the same thing, allowing the user to assign their profile to a specific USB device such that when it is plugged into the machine, it automatically logs the user in. Just remember to take the USB stick with you when not in use, or make sure that pesky housemate #2 does not get hold of it. 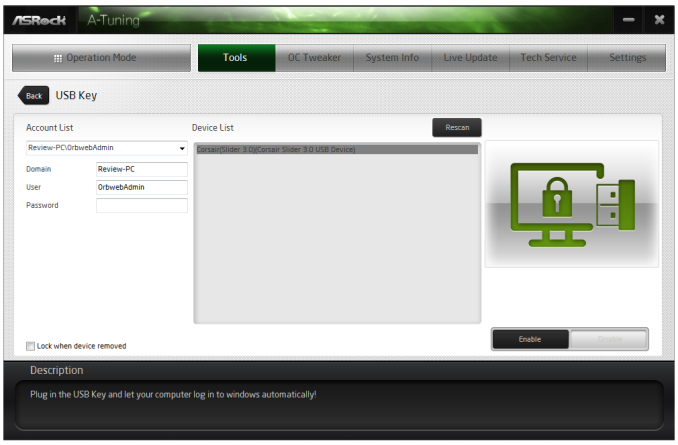 I know my early generation Samsung PB22-J 64GB in my netbook is throwing up errors at boot time about SSD life. In order to help diagnose these issues, I need to download and obtain software that reports the flags in the device. ASRock has now added this to the software bundle to bypass the online hunt. 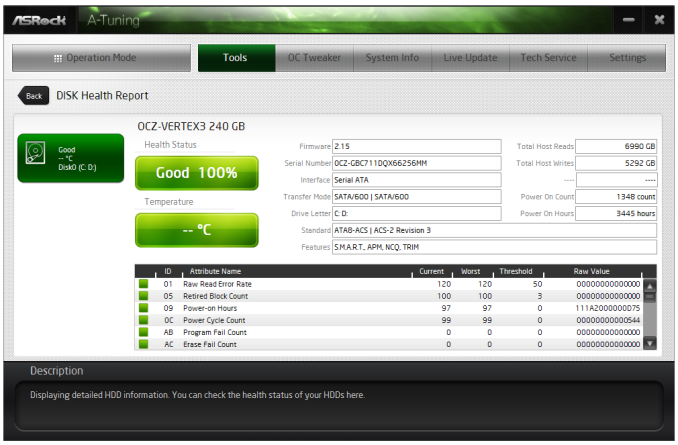 This software also shows total host reads and writes along with power on counts and time lengths. Shown above it says my boot SSD has been powered on 1348 times, which makes sense for a test bed SSD!

For manual OS overclocking we have the OC Tweaker tool which emulates the OC Tweaker menu in the BIOS. All the options are in one big long line; however there is now a pullout section on the right hand side regarding CPU frequencies to show the current state of the system. 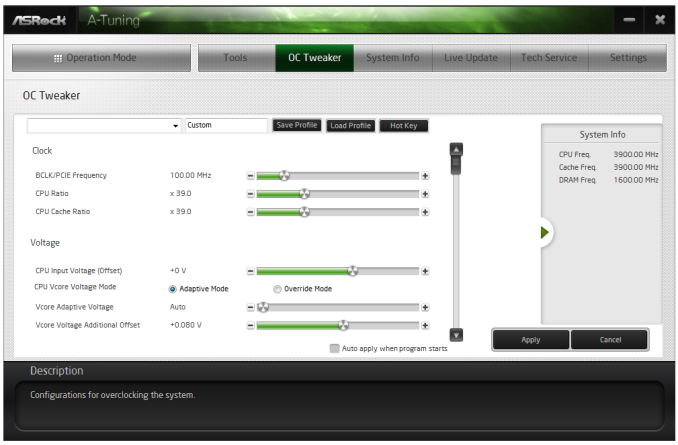 Similar to the BIOS tool, the System Browser lets the user see what is installed into the system. Should a stick of memory, for whatever reason, stop working users can see it with this software. 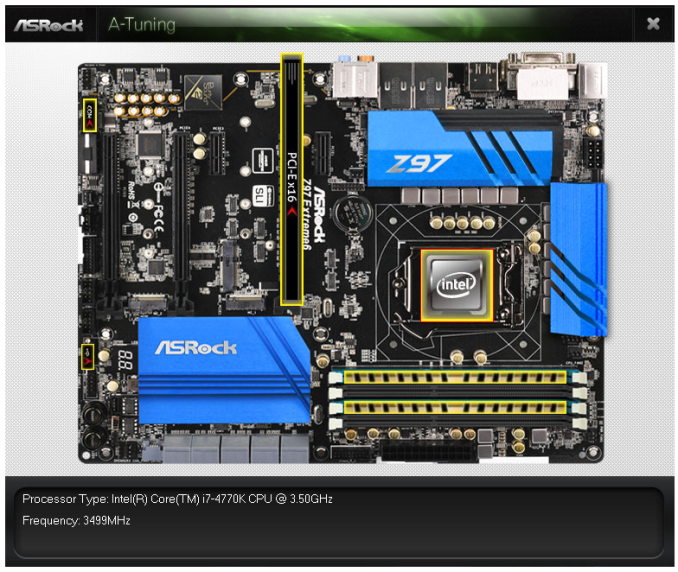 Alongside the updating tool in the App Shop, ASRock has a tool in A-Tuning to do the same thing. Here we can select which server to go for as well to get the best connection speed. One feature I want to ASRock add is to display the size of the update before downloading, in case the software is large and my bandwidth limit is small. 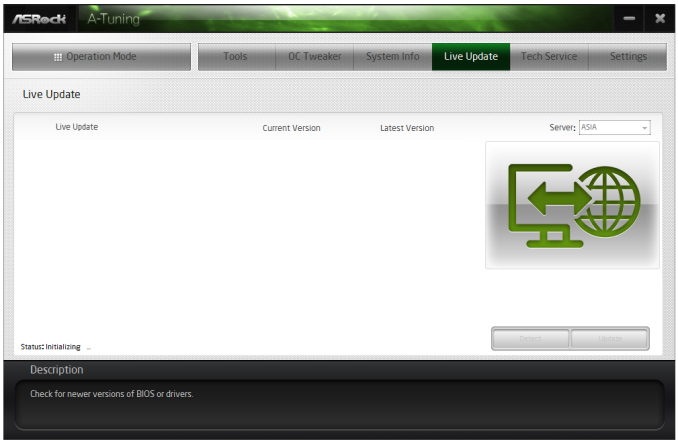