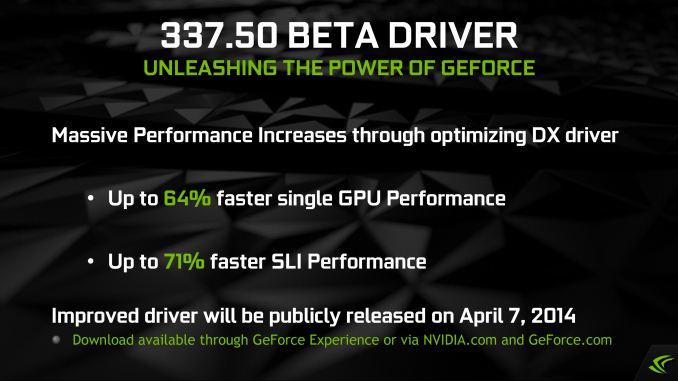 Kicking off what will undoubtedly be a busy week in the world of video cards, NVIDIA has started the week with a new GeForce driver release over on their GeForce website. This latest driver, version 337.50, is the first public release from the new R337 driver branch, and comes roughly two months after the first R334 driver.

In a change of pace reflecting the importance of this driver, NVIDIA will be rolling out the red carpet for R337. While every major driver branch includes its share of bug fixes and performance improvements, NVIDIA is promoting R337 as one of those rare and exceptional performance drivers that we always like to get, one that will significantly improve performance across a range of games. With that fanfare in mind, NVIDIA has briefed the press on these drivers ahead of time and given us a few days to play with them to see just what kind of performance improvements they bring.

To put this to the test, we’ve updated our benchmarks for our GeForce GTX 780 Ti and plotted those results against the most recent set of comprehensive results we had for that card, which is last year’s R331 driver release. 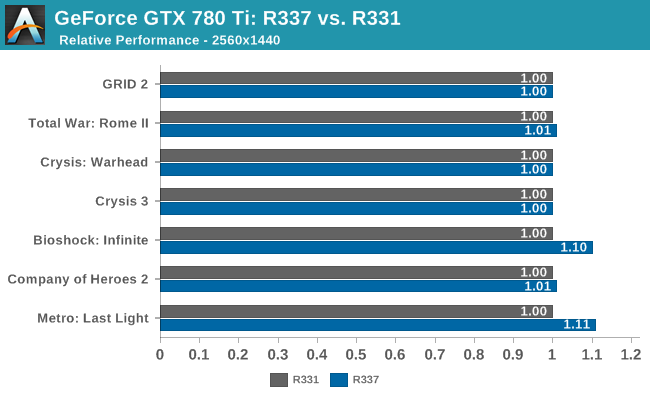 To no great surprise the actual performance gains are very game specific. We’re seeing anywhere between break-even performance on games like GRID 2 and Crysis 3, to 10%+ gains in games like Metro: Last Light and Bioshock: Infinite. Even in the cases NVIDIA makes sweeping changes to the underpinnings of their drivers, any potential performance improvement is going to hinge on where the bottlenecks are and what games are using the bottlenecked function.

NVIDIA has also put similar degree of effort – if not more – into improving SLI performance. 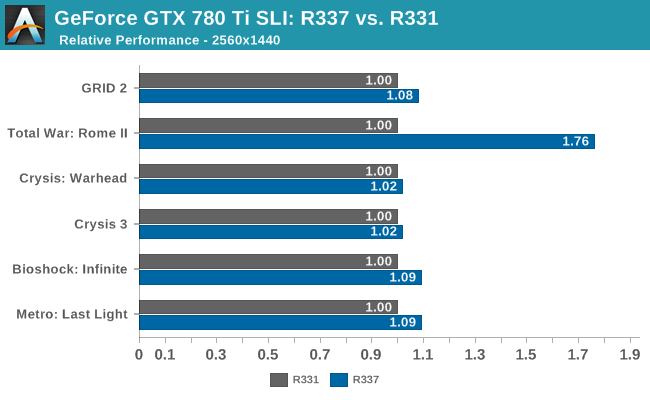 Unlike our single-GPU results, every SLI-compatible game has seen at least a slight performance increase. This ranges from 2% in Crysis 3 and 9% in Metro, up to 76% for Total War: Rome II. In the case of Rome II NVIDIA’s previous drivers were incapable of getting good multi-GPU scaling out of the game, and with R337 they have apparently finally surmounted Rome’s AFR-unfriendly nature. However it should be noted that for the moment Rome II is suffering from (or causing) graphical glitches on both NVIDIA and AMD multi-GPU setups, so both vendors still have some work to do when it comes to Rome II.

NVIDIA hasn’t released a complete list of games they’re expecting performance improvements in, but from our results and from their press deck it looks like the gains from these drivers are very hit & miss. In our experience the gains from R337 will depend on the game and quite often the settings and features used within that game, and ultimately whether those combinations leave you CPU limited or GPU limited. Otherwise for better or worse some of NVIDIA’s targets for optimization have included relatively popular (but old) benchmark games – titles like Alien vs. Predator and Sniper Elite V2 – a practice that’s hardly unusual, but it means these performance gains may not translate over to to less popular games or games that don’t benchmark well. 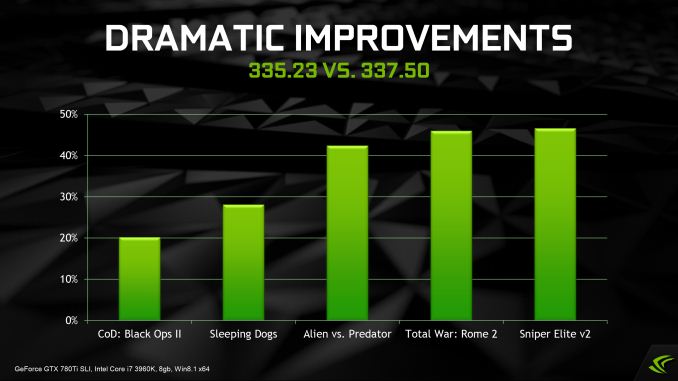 Meanwhile for the moment NVIDIA is being rather coy on what they’ve done under the hood to squeeze out these performance improvements out of their now well-developed Kepler GPUs, saying that they’re going to waiting until these drivers are out of beta to talk about what they’ve been doing under the hood. In other words, it looks like it will be few more weeks until we get a chance to see just what NVIDIA has been up to in the last couple of months.

What isn’t under question however is NVIDIA’s motivation, which is the favorable press and the performance gains AMD has picked up as a result of their fledgling Mantle program. As we saw a couple of weeks ago, low-level programming is going to be making a significant resurgence in the PC gaming space through Microsoft’s forthcoming DirectX 12, with Mantle in turn serving as a vanguard of sorts for the concept. In the interim with DirectX 12 development targeting Holiday 2015 games (a preview build is expected this year) NVIDIA needs to make sure they remain competitive with AMD regardless of the technical differences. 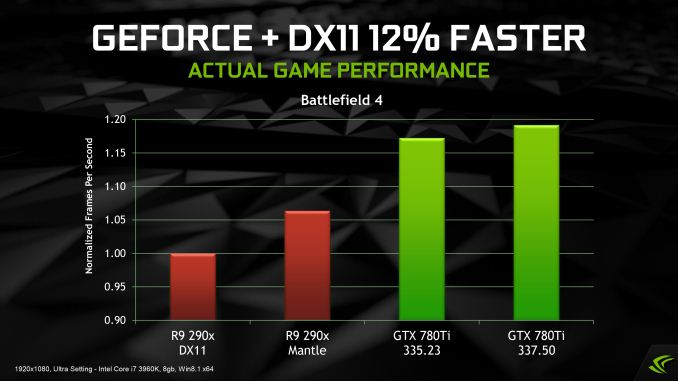 The end result has been that NVIDIA has been focusing on Mantle-enabled games for their driver performance improvements, doing what they can to improve performance within the confines of Direct3D 11. This has included Battlefield 4 and Thief so far, and we wouldn’t be surprised if NVIDIA undertook a similar effort for any future high-profile Mantle games. All things considered NVIDIA has an overall hardware performance advantage at the high end, but AMD’s Hawaii products are fast enough that NVIDIA needs to counter Mantle-derived performance improvements if they wish to stay on top, giving NVIDIA a very good reason to keep an eye on AMD and Mantle.

Finally, coinciding with today’s launch of the 337.50 drivers, NVIDIA will also be launching GeForce Experience 2.0. We’ll be looking at that in a separate article, but GeForce Experience 2.0 will bring with it additional features for GeForce desktop and mobile products, including ShadowPlay feature enhancements and official support for ShadowPlay and Battery Boost on mobile products. Meanwhile GeForce Experience 2.0 will also be enabling Gamestream support over the Internet for NVIDIA’s SHIELD handheld, finally allowing users to access home and centralized (GRID) remote gaming over both local networks and the larger Internet. 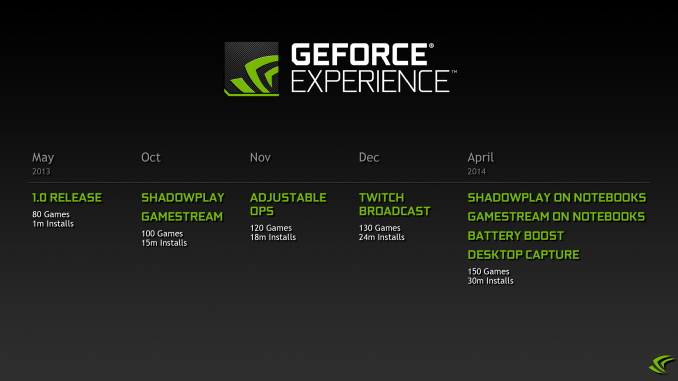