Given the lower power consumption of 270, we had expected to find the GPUs in the 270 cards would be binned on voltage, but of our limited sample that doesn’t appear to be the case. The 270X and our 270 cards are all around 1.2v. So AMD’s power savings are apparently coming off of leakage binning and clockspeed reductions.

Looking briefly at clockspeeds, as these are all PowerTune Boost 1.0 cards, the boost capabilities are very coarse grained. All of our cards report that they’re at their boost state throughout their entire benchmark runs. Unlike the 280X and 290 series these are very narrow ranges – just 25MHz to 50MHz – so our clockspeed uncertainty here from the coarse reporting is similarly low. 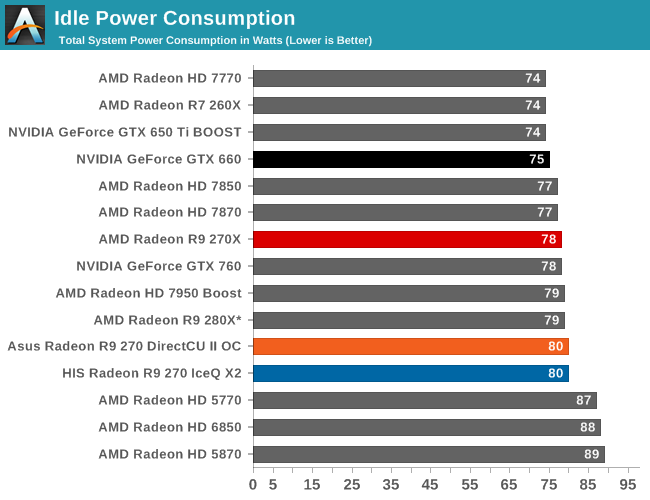 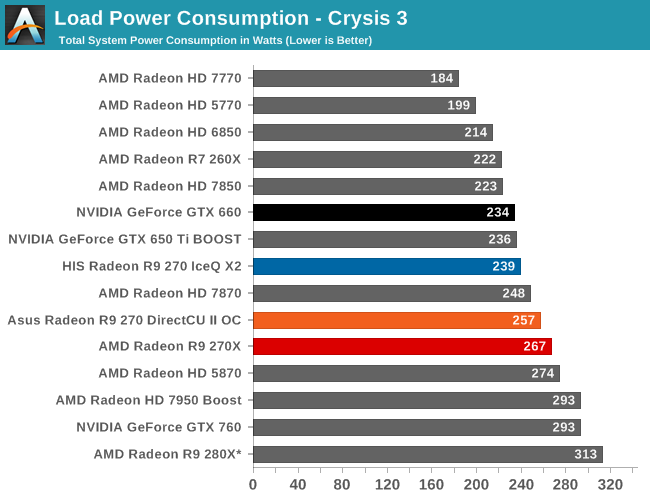 Moving on to load power consumption, there are a few things to look at. First and foremost, because AMD is still on Pitcairn and still on TSMC’s 28nm process, power consumption has nowhere to go but higher in tandem with performance. This goes both for comparing the 270 series to the 7800 series on a hardware basis, and comparing it to the 7700 series on a price/performance basis. To that end the 270X at 267W at the wall is drawing more power than the 7870 and GTX 660, but less than the GTX 760 and quite a bit less than the 280X.

The 270 meanwhile is split. Despite the minor clockspeed differences between our 270 cards, the Asus card is drawing a total of 18W at the wall more than the HIS card. Some of this will be performance based, but for whatever reason the Asus card seems more power hungry in general. Note that in either case, this is going to be more than the GTX 660. However if we were to normalize the HIS 270 to the GTX 660’s Crysis 3 performance, the power consumption difference of 5W would likely vanish if not reverse. Though regardless, the 270 is going to be more power hungry than the outgoing 7850, despite the identical TDPs. It also means there’s a small but meaningful difference between the 150W 270 and the 130W 260X. 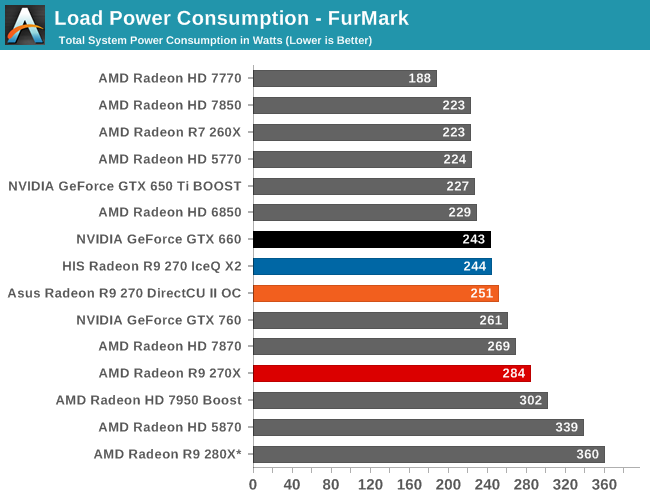 Meanwhile for FurMark, we see some compression as power consumption becomes largely a function of programmed TDP limits. All 270 series cards are exceeding their 7800 series predecessors, with the 270X approaching the power consumption of the 7850 Boost. This test also highlights the difference between the GTX 760 and 270X in maximum power consumption; the 270X will draw less power on average, but it’s ultimately rated for more than the GTX 760.

As for the 270 cards, everything clusters together. We still have a difference between the HIS and Asus cards, but at 7W it’s not nearly as much as under Crysis. More significantly we can see both the HIS 270 and GTX 660 topping out within 1W of each other, illustrating  the 150W wall. 7850 by comparison is 20W less; we have always worked on the assumption that AMD was slightly overstating their TDPs on the first generation GCN products, and that would certainly be the case here. That or AMD (and NVIDIA) are exceeding PCIe specs and drawing more than 150W. 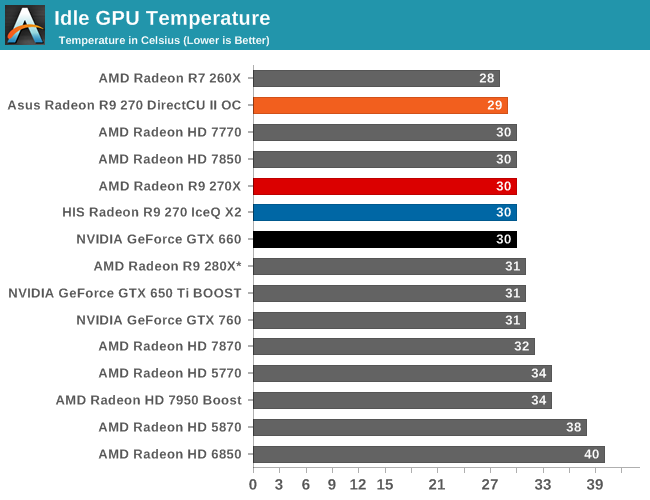 For idle temperatures there are no big surprises. Everyone is around 30C. 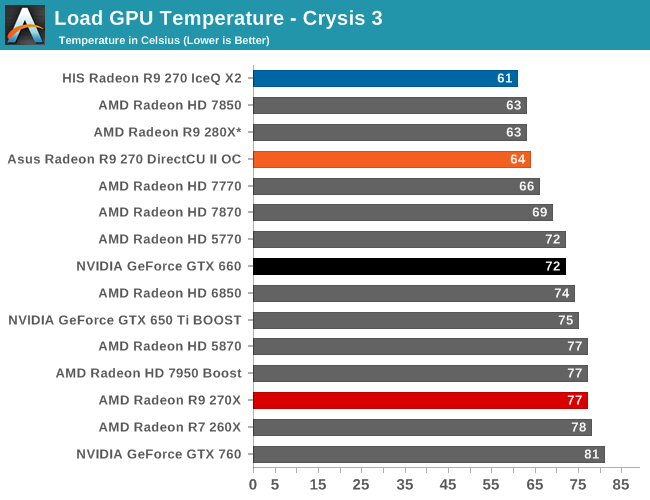 We’re not going to spend too much time talking about load temps/noise for the 270X since the reference design will not be for sale, but briefly we can see that AMD’s blower lets it get relatively warm. Though nothing here tops the GK104 based GTX 760 and its 80C throttle point.

Otherwise for the 270 cards, both of them are going to be significantly cooler than the GTX 660. Again owing to the difference between a blower and an open air cooler, the 270 cards are 8 to 11 degrees cooler. Between the two of them HIS will have the edge at 61C, though we’re going to have to look at noise to get the full picture. 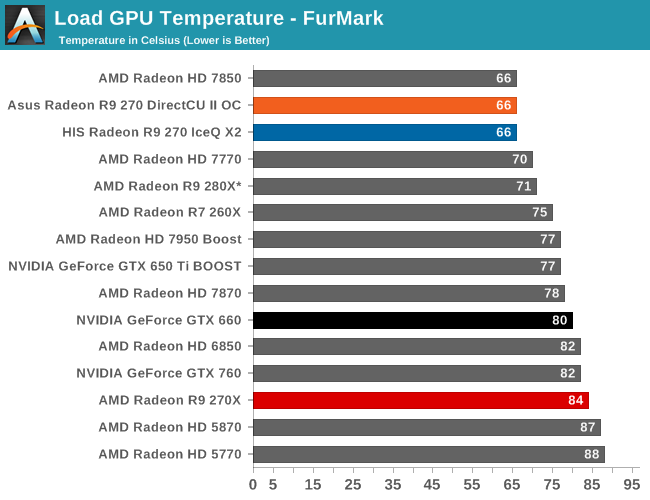 FurMark further drives a wedge between blowers and open air coolers, with the open air based 270 cards now operating 14C cooler than the GTX 660. However the reference 270X suffers similarly; AMD’s cooler loses some ground, letting the card rise to 84C. 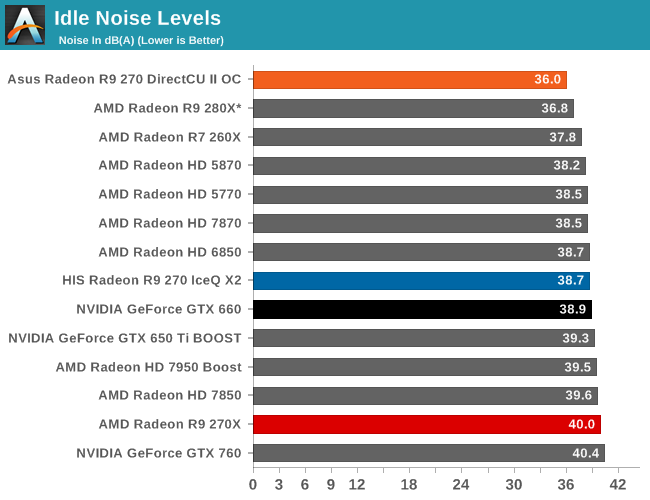 Finally for our look at noise, the results are fairly typical for every card except the Asus. Asus’s 270 by comparison to everything else now holds the new record for quietest card on our current testbed, coming in at just 36dB. It’s quiet enough that we had to double check if the fans were running, as they are hard to hear at this noise level even with our case cracked open. The Asus card can’t by definition be silent, but quiet computing enthusiasts should be quite pleased at idle. 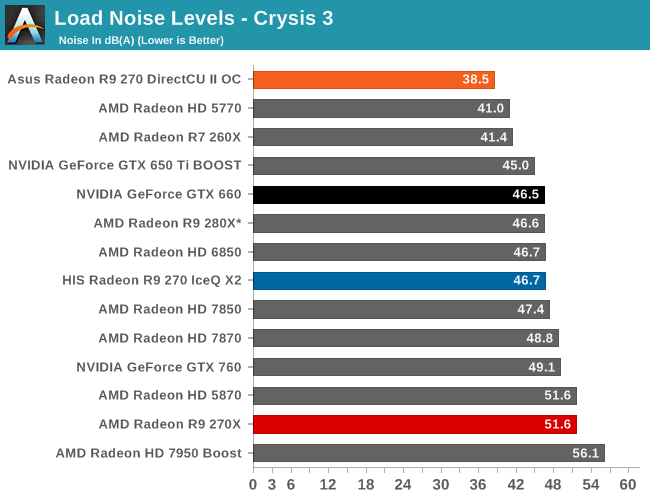 As for load noise, we can briefly see that he 270X isn’t going to be particularly impressive. Besides operating at a higher temperature than the GTX 760, it’s also louder. We really want to see at least some blower options for 270X, but AMD’s reference blower struggles with the task.

For the 270 cards on the other hand, the outcomes are mixed. The blower based GTX 660 for its part does rather well despite the handicap; the HIS card is actually marginally louder even though it’s open air. For this class of card the HIS is rather typical in cooling performance, but it means it’s in a crowd.

The Asus card meanwhile almost requires a new chart of its own just to put it in perspective. Asus has been impressing us lately with their DirectCU II coolers, and this is one example of why. 38.5dB is quieter than half of these cards at idle; that’s how quiet Asus’s 270 is. The HIS card can’t match it, and even the lower powered open air 5770 can’t match it. As far as open air coolers go, Asus is approaching the pinnacle of performance here, fully exploiting the advantage the design offers, and making their 270 significantly quieter than the GTX 660. 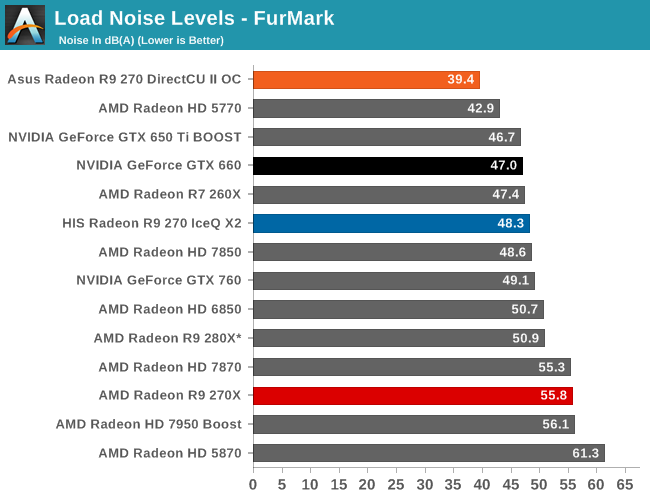 Furmark further drives a wedge between the Asus 270 and everything else. It’s still under 40dB here, more than 7dB quieter than the GTX 660 or the HIS 270. From a noise perspective it really is that much better, and since we’ve already seen the temperature data we can safely say that it hasn’t come at the cost of significant temperature increased. Though as always we have to be clear that we’re looking at an open air cooler versus a sea of blowers here, so the usual precautions about trade-offs apply.