Jumping into compute, we’re once again treading into familar territory. Pitcairn is Pitcairn is Pitcairn, and for the 270 series this will result in the same general performance increases we've seen elsewhere. 270 will of course be the bigger winner, owing to its upgrade to a fully enabled Pitcairn part. Also, on a quick housekeeping note we'll only be looking at the HIS 270 here. Our primary interest is on a broad architectural basis, rather than the minor impact from factory overclocks. 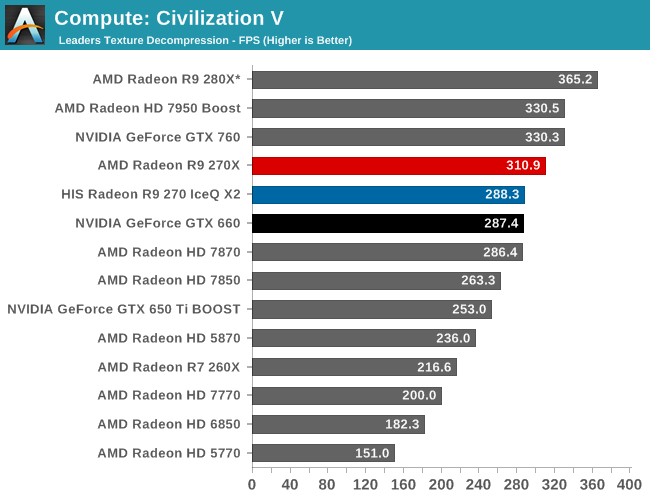 Both 270 cards do well for themselves here. The 270X holds the overall edge of course, though it’s interesting to note that the 270 and GTX 660 are virtually tied here. 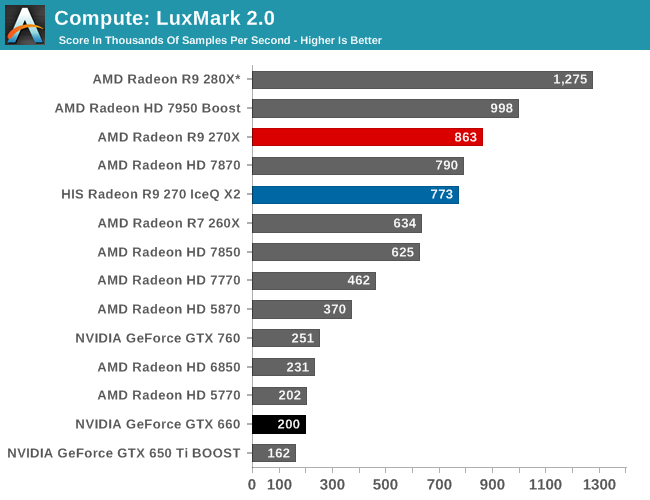 AMD consistently rules the roost on LuxMark, so there aren’t any surprises here. This chart is essentially just the AMD GCN cards sorted by performance, followed by their older VLIW cards and the GeForce cards. 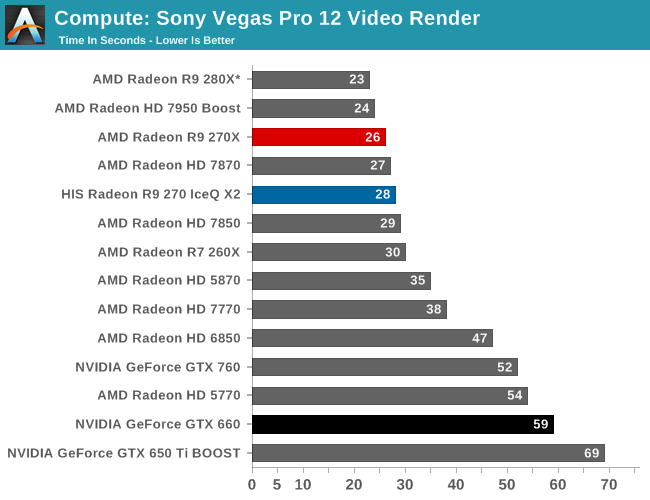 Like LuxMark, Sony Vegas is a benchmark dominated by AMD. The lead here is so great that the 270 could run this benchmark twice over before the GTX 660 completed it once. 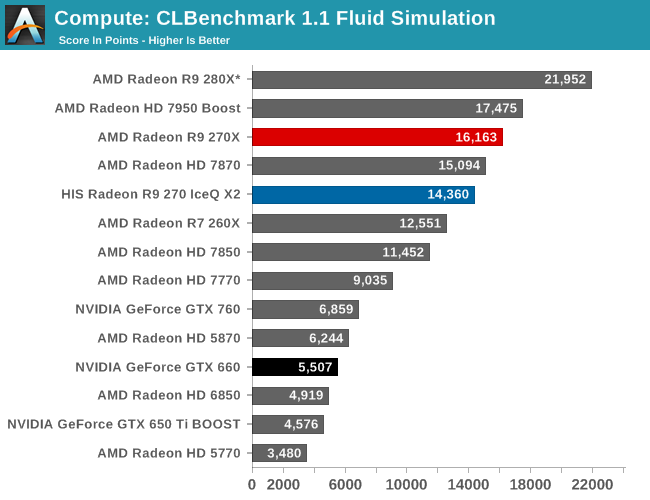 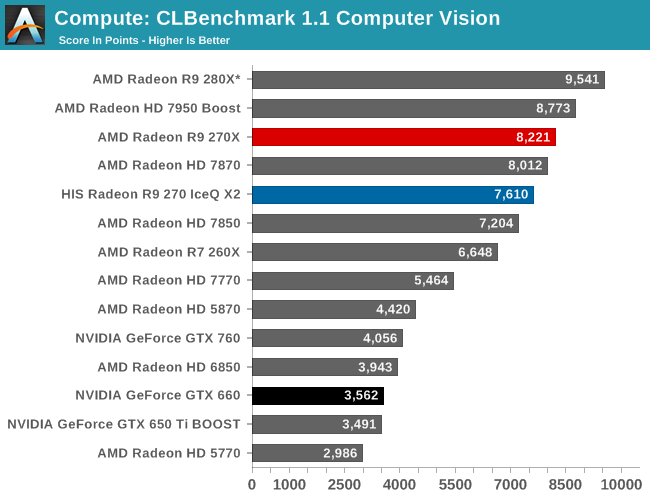 Both CLBenchmark’s fluid simulation benchmark and the computer vision benchmark go to AMD here. The GTX 660 and GTX 760 are not competitive here. 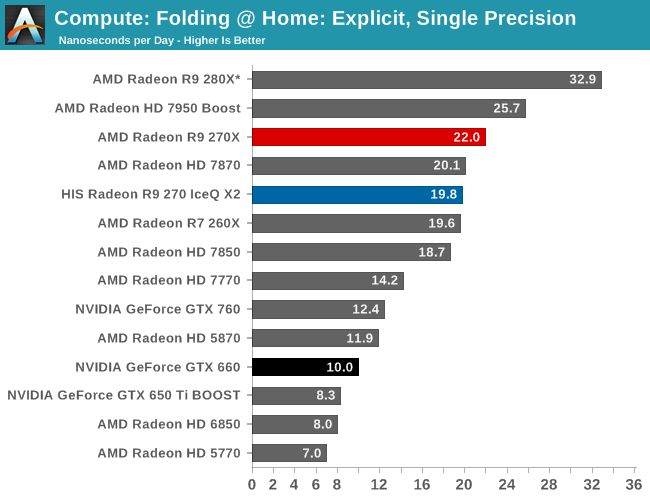 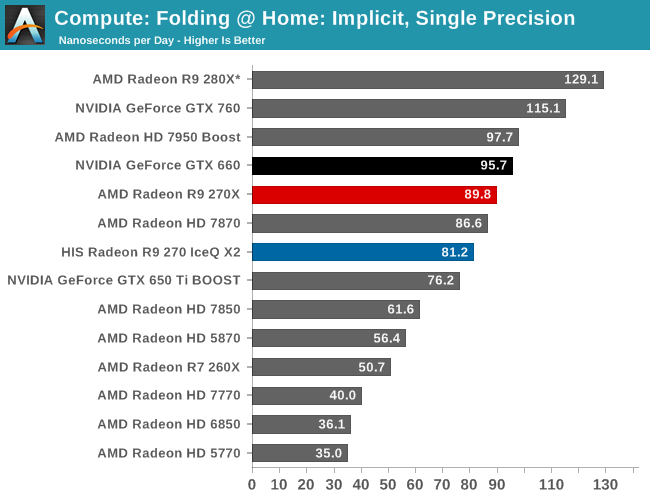 When it comes to Folding@Home, the winner is highly dependent on the specific test. For the explicit simulation the GTX 660 is a significant laggard, leaving the 270 series to take the top spots for sub-$200 cards. In the implicit test however none of the 270 cards can hold their ground against the GTX 660, not even the 270X. Folding@Home uses a mix of these data types so there won’t be any one clear winner, but the 270 series loses by a smaller margin in implicit than the GTX 660 does in explicit. 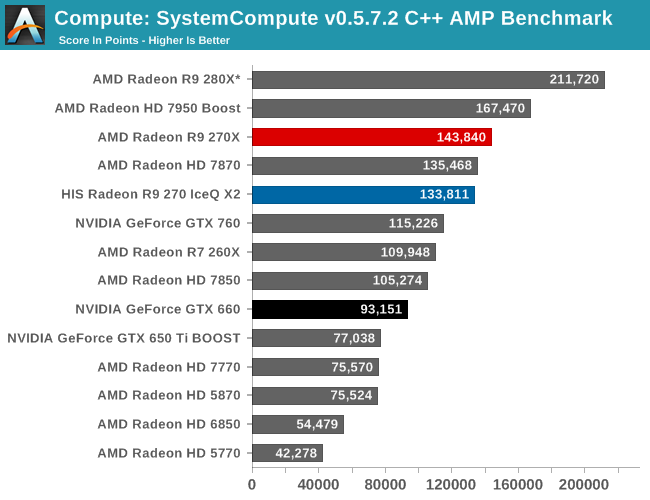 SystemCompute is another compute benchmark that goes to AMD. The 270 and 270X handily beat the GTX 760, never mind the GTX 660.