With the iPad Air Apple moved to a 32.4Wh battery, a significant decrease from the 42.5Wh unit in the 3rd and 4th generation iPads. The smaller battery doesn’t come with a change to Apple’s claim of 10 hours of battery life, which implies a reduction in overall platform power. I confirmed a substantial reduction in platform power in my crude measurements earlier in the article. Although it’s possible for the iPad Air to draw substantially more power than the iPad 4, our earlier power data seems to imply that it’s unlikely given the same exact workload. Our battery life tests agree.

We'll start with our 2013 smartphone/tablet web browsing battery life test. As always all displays are calibrated to 200 nits. The workload itself is hidden from OEMs to avoid any intentional gaming, but I've described it at a high level here. 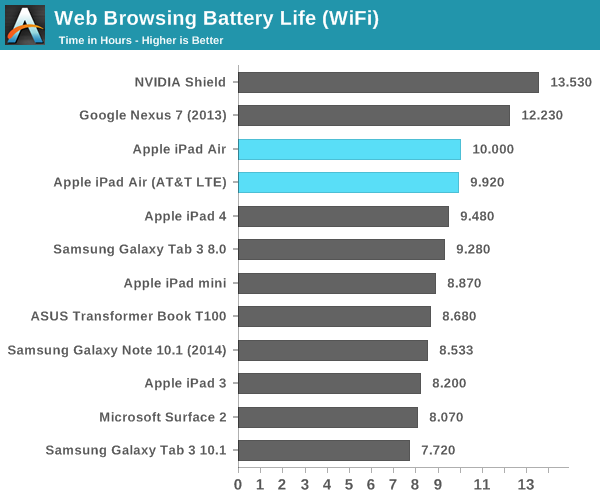 Our web browsing workload came in at exactly 10 hours of continuous usage - an improvement compared to the iPad 4. Battery life on LTE was good as well, consistently delivering just under 10 hours of usage. The fact that both LTE and WiFi tests deliver similar results tells me that we may be bottlenecked by some other component in the system (perhaps display?).

I've been running the same video playback test for a while now, although we're quickly approaching a point where I'll need to move to a higher bitrate 1080p test. Here I'm playing a 4Mbps H.264 High Profile 720p rip I made of the Harry Potter 8 Blu-ray. The full movie plays through and is looped until the battery dies. Once again, the displays are calibrated to 200 nits: 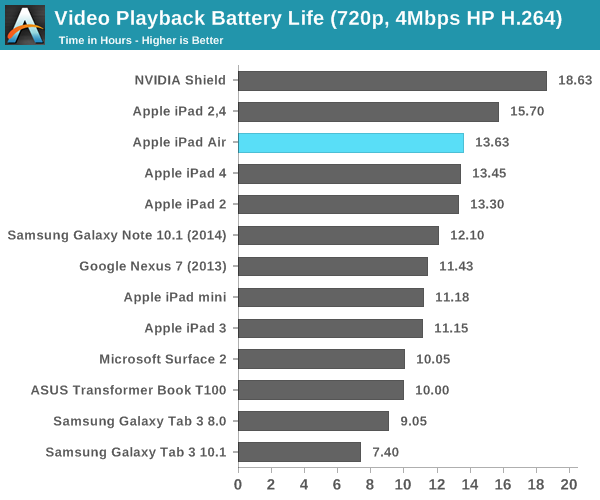 Our final cross-platform battery life test is based on Kishonti's Egypt HD test. Here we have a loop of the Egypt HD benchmark, capped to 30 fps, running on all of the devices with their screens calibrated to 200 nits. 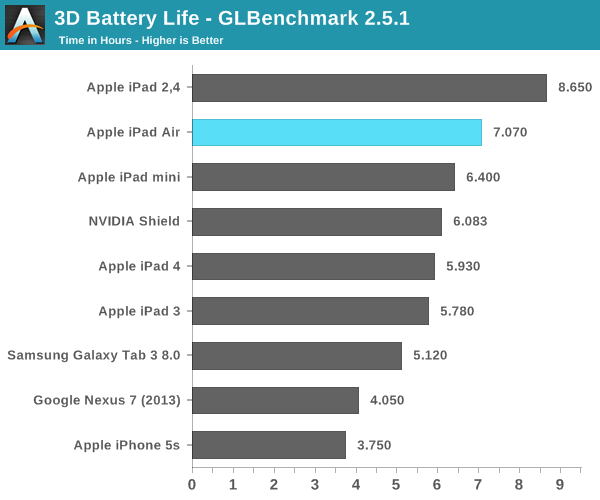 Our 3D battery life rundown test shows a substantial improvement in battery life over the iPad 4. IMG’s PowerVR G6430, running a moderate workload, can do so more efficiently than any of the previous generation GPUs in Apple’s SoCs. Much like the A7’s CPU cores however, there’s a wider dynamic range of power consumption with the G6430. Running at max performance I would expect to see greater GPU power consumption. The question then becomes what’s more likely? Since the majority of iOS games don’t target the A7 (and instead shoot for lower end hardware), I would expect you to see better battery life even while gaming on the iPad Air vs the iPad 3/4.

The iPad Air comes with the same 12W USB charger and Lightning cable that we first saw with the iPad 4. Having to only charge a 32.5W battery means that charge times are lower compared to the iPad 3 and 4: 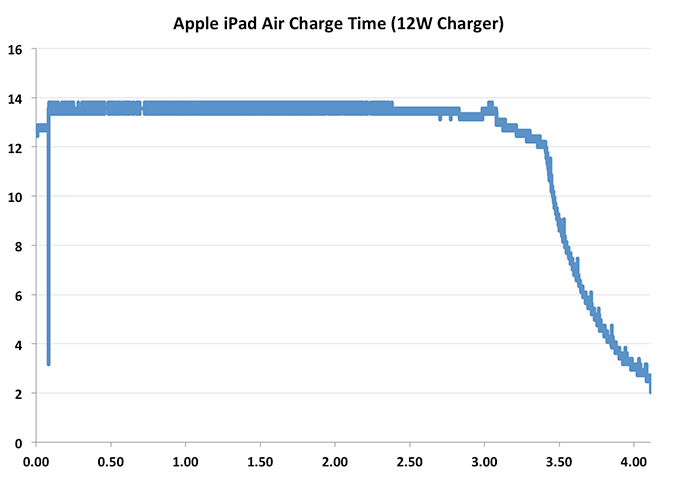 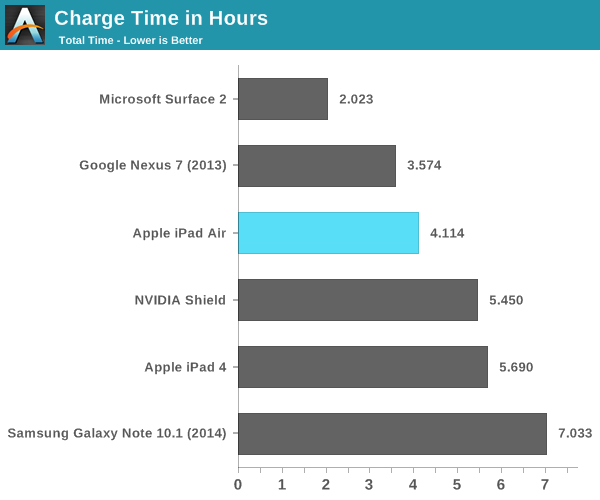 A full charge takes a little over 4 hours to complete. The adapter delivers as much as 12W to the iPad, drawing a maximum of 13.5W at the wall. I still think the sweet spot is somewhere closer to 2.5 hours but that’s another balancing game that must be played between charge time and maintaining battery health. It’s still so much better than the ~6 hours of charge time for the iPad 3 and 5.69 hours for the iPad 4.