HTC One max Review - It's Huge 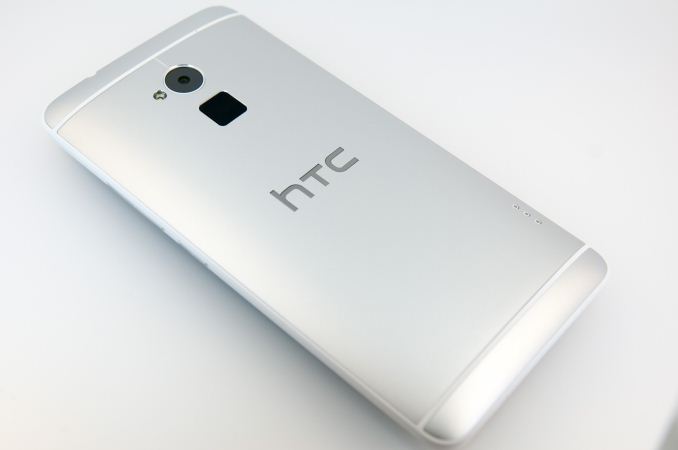 The One max fingerprint sensor is a swipe type, meaning there’s some kind of strip sensor inside that you swipe your finger across. Sliding your finger over this strip allows the module to scan a 2D region and extract features that are then used to identify a fingerprint. The One max hides this scanner inside a black square that’s slightly recessed on the back of the device, just beneath the camera. I’m reminded somewhat of the LG G2 and its rear-mounted power and volume buttons which also sit just beneath the rear-facing camera. Perhaps that’s a missed opportunity for LG, which could have also gone with a swipe type sensor in its power button. On the One max anyhow there’s no button, just the sensor. Although the fingerprint sensor is recessed slightly, it’s somewhat difficult to locate with just one’s index finger, something that results in inadvertent smudging of the rear-facing camera cover glass, something that didn’t happen as much with the G2 because there’s a larger lip and easily locatable bump. 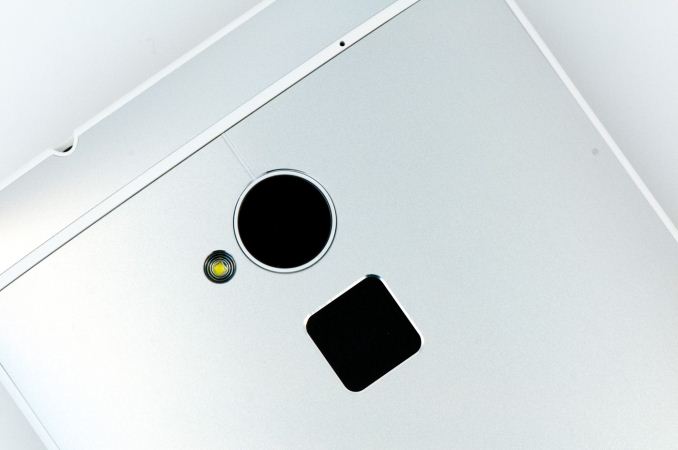 The placement of the fingerprint sensor makes sense given that of the power button. As stated earlier for right handed users this means your index finger sits naturally near the sensor if your thumb is on the power button. Since the fingerprint button still requires activation to unlock the One max, you still need to press power to turn it on before you can swipe your finger and finally unlock it. I find myself wishing the fingerprint sensor was itself a button, something like the iPhone 5s, so unlocking could be as simple as pressing and swiping with the same finger. On the iPhone 5s the best activation pattern is pressing the home button and leaving the finger in contact with the button. 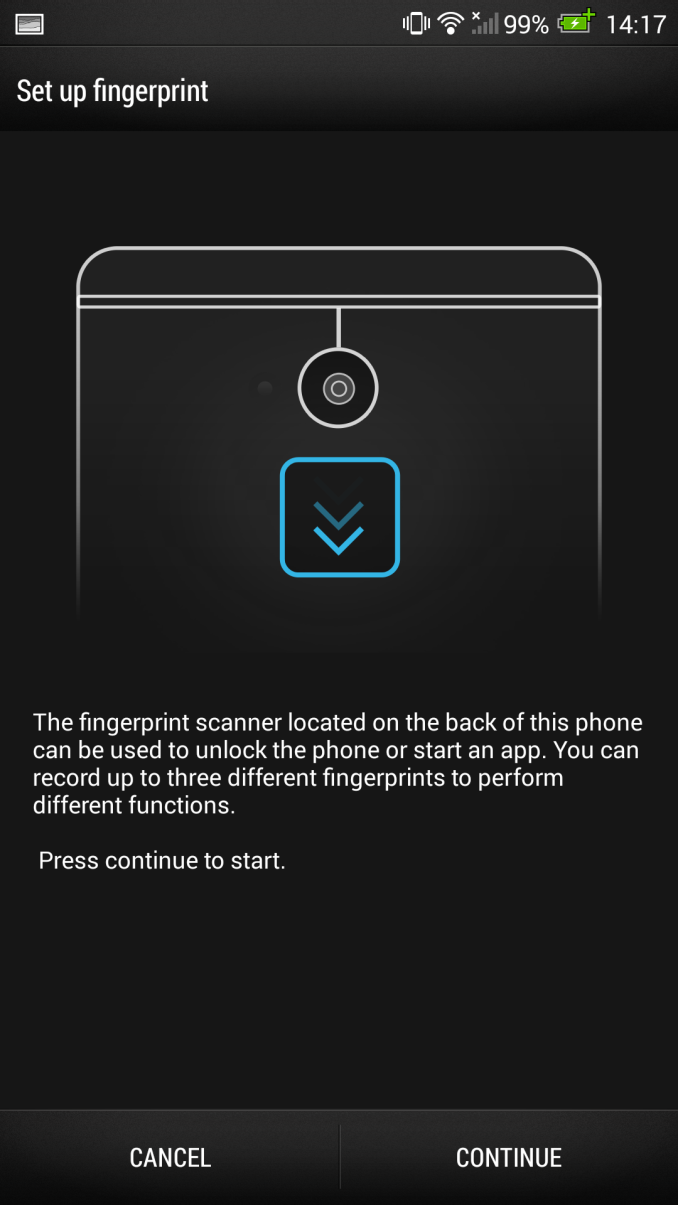 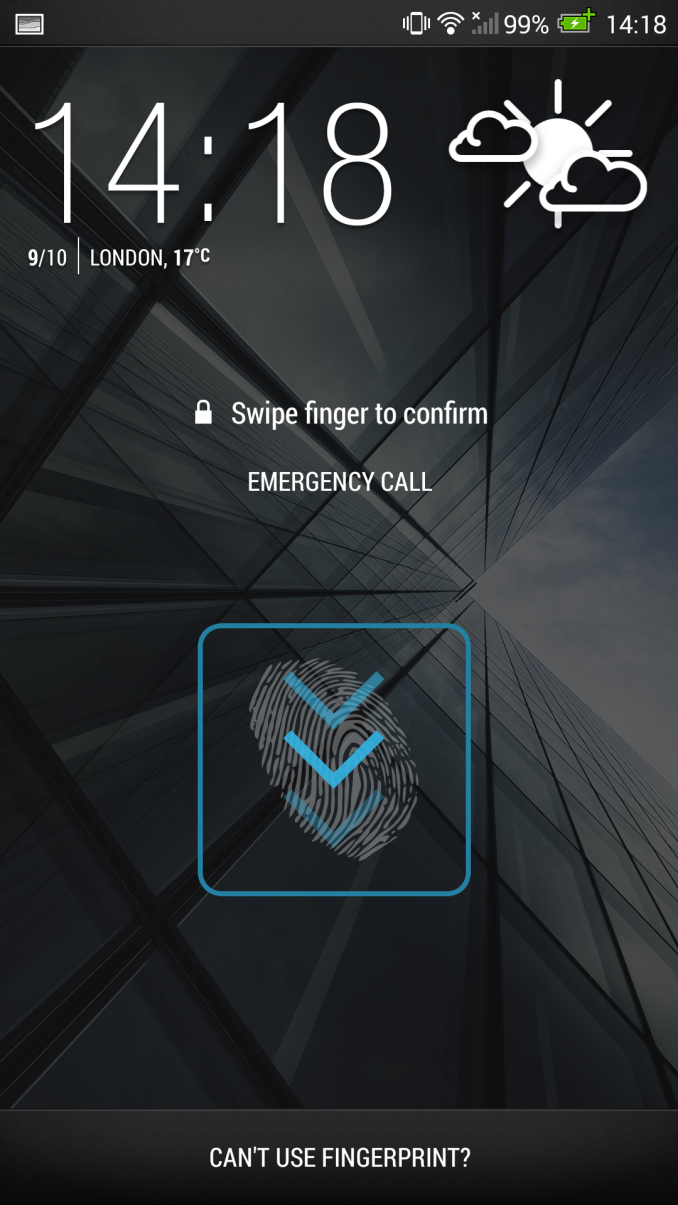 Setup requires you to set a passcode, after which a few training swipes trains the sensor for the finger you’ve chosen. Although the animation that plays shows the finger aligned along the long axis of the phone, for greater accuracy I trained the One max with my finger at the angle it would naturally be given my thumb on the power button. The only requirement given the swipe sensor is that the slide motion is straight down and not skewed. 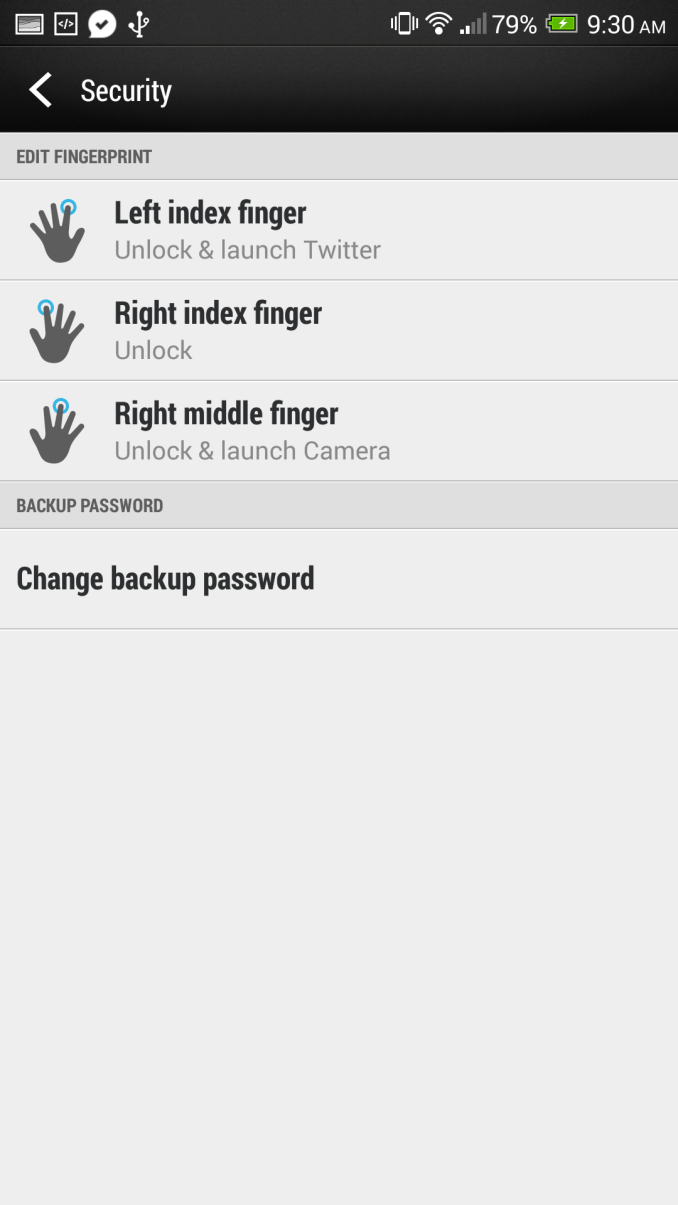 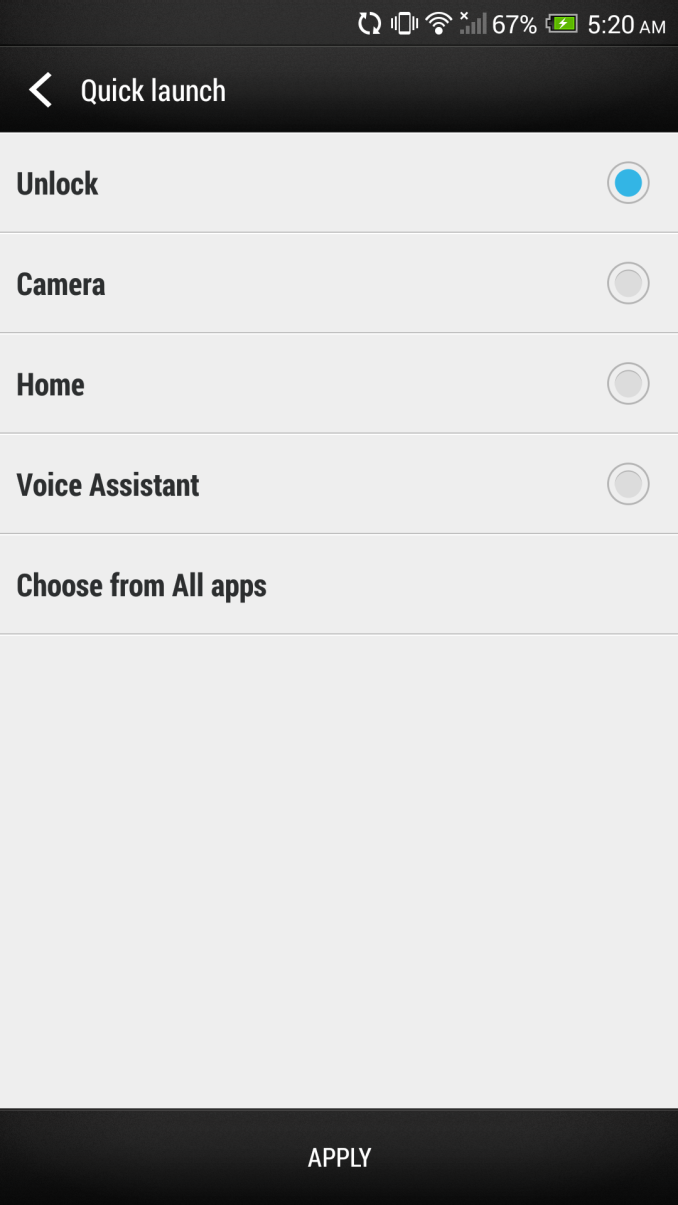 The One max fingerprint sensor allows for up to 3 fingers to be paired, each able to either unlock or have the option of both unlocking and launching an application. I like the idea of fingerprints as shortcuts, something the iPhone 5s implementation lacks, but three fingers seems like a curiously low number given the ten digits humans have to work with. On the other hand, the placement of the button really limits you to middle and index fingers being viable options. In terms of functionality, although Apple doesn’t yet use fingerprints as shortcuts, Apple does use the fingerprint scanner to authenticate iTunes, iBooks, and App Store purchases, something HTC can’t quite do with the One max for Google Play purchases, at least until Google makes an API for it.

I initially trained the fingerprint sensor with my index finger being swiped straight down, and had some issues with unlocks requiring multiple swipes. Doing finger enrollment and training at an angle closer to how I actually swipe it naturally (at an angle) made the accuracy better, but the reality is that unlocking the One max still requires multiple tries more often than not. There isn’t much processing latency after a scan, but I had hoped the One max sensor would be tap and hold rather than swipe given its shape. I’m not clear what suppliers are involved for the sensor, but I’m told the One max also securely stores just the extracted features and not the fingerprint images (which is a no brainer). I haven’t delved much into the infrastructure used to secure the fingerprint features yet either. I’m also not sure whether the One max learns additional parts of the finger which wasn’t part of initial training the same way Apple’s does.