We’ve known for a while that Intel’s Haswell processor would continue to drive GPU performance in a significant way. With Haswell, Intel will offer a higher end graphics configuration with more execution resources than before (GT3) as well as an even higher end offering that pairs this GPU with 128MB of embedded DRAM on the CPU package (GT3e). Intel’s performance target for the highest end configuration (GT3e) is designed to go up against NVIDIA’s GeForce GT 650M, a performance target it will hit and miss depending on the benchmark.

Regardless of whether or not it wins every benchmark against the GT 650M, the fact that an Intel made GPU can be talked about in the same sentence as a performance mainstream part from NVIDIA is a big step forward. Under no circumstances could Intel compete with NVIDIA on performance and still do so under the Intel HD Graphics brand. Haswell is the beginning of a new era for Intel. The company is no longer a CPU company forced into graphics, but with Haswell Intel begins its life as a GPU company as well. As a GPU company, Intel needs a strong GPU brand. AMD has Radeon, NVIDIA has GeForce, and now Intel has Iris.
The brand is a nod to a long forgotten history of 3D graphics, as well as an obvious reference to the fact that GPUs are used for very visual purposes. Before OpenGL was well, open, it was a project known as IrisGL.
Intel is doing the right thing with Iris and only using it to refer to its absolute best graphics options. Intel HD Graphics will remain, and will refer to all GT1/GT2 and some GT3 configurations with Haswell. Iris and Iris Pro will be used to refer to high end GT3 and GT3e configurations: 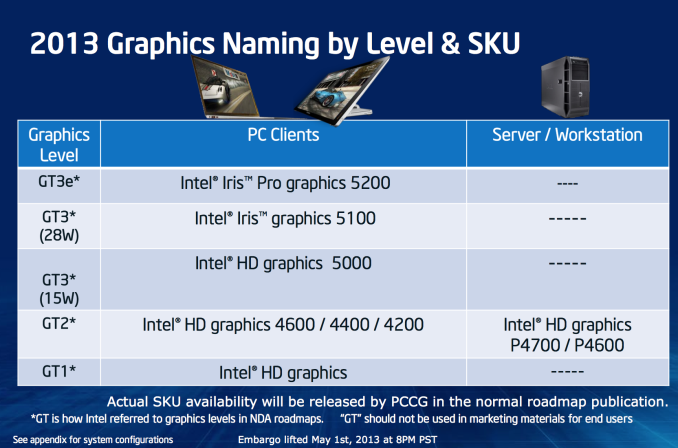 Anything with GT3e will have Intel’s Iris Pro 5200 graphics, while 28W SKUs with GT3 will have vanilla Iris 5100 (non-Pro). Any 15W SKUs with GT3 will be HD Graphics 5000, and GT2/GT1 parts will also be identified as Intel HD Graphics.
We know what makes Iris Pro special (128MB of eDRAM), but it appears that the main difference between Iris 5100 and HD 5000 is max GPU clock speed. Intel wants Iris associated with performance, which is a very good thing. Having Iris reach down into non-GT3e parts as well is a bit unsettling but at least GT3e gets the Pro designation.
Intel claims Iris/Iris Pro will deliver up to 2x better performance than Intel’s HD 4000 graphics in notebooks, and it’s using 3DMark11 to validate that claim: 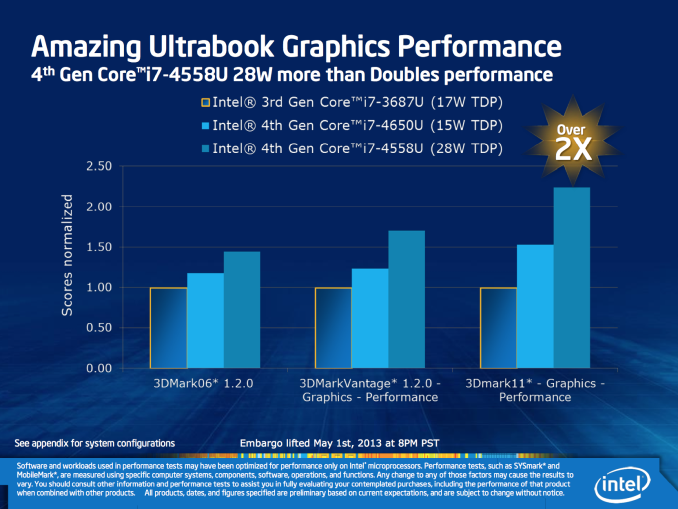 Although Ultrabooks (now 15W) won’t get full blown Iris performance, they should still see a healthy increase in GPU performance compared to where they are today (50% improvement in 3DMark) at a lower TDP. The move to a full speed GT3 part (Iris) should more than double performance in 3DMark. Also worth noting is the fact that we now have a 28W ULT part (i7-4558U). This is a part designed for larger Ultrabooks (14/15"+) that would otherwise have a low end discrete GPU. 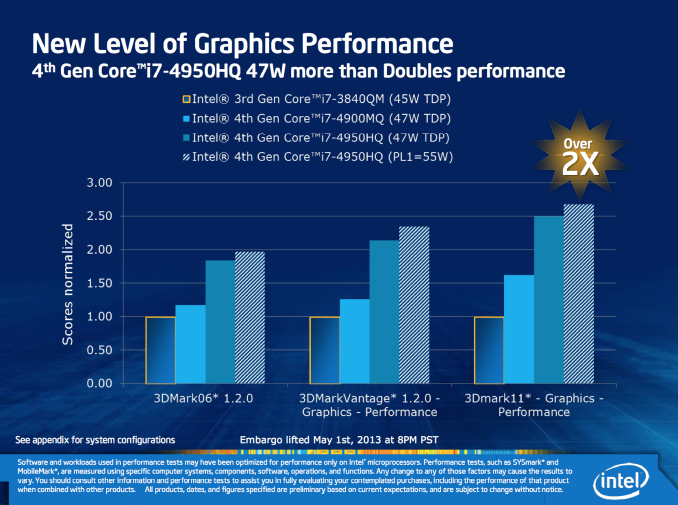 Iris Pro will be exclusive to quad-core parts, and the advantage there grows to 2.5x in 3DMark11. There's a slight increase in processor TDP here, but obviously much better performance. That last bar is with the i7-4950HQ running with its TDP set to 55W (cTDP up).
BGA (non-socketed) desktops will also have the option of using Iris Pro if you get an R-series SKU. The performance gains there over Intel HD 4000 are even more impressive thanks to the additional TDP headroom: 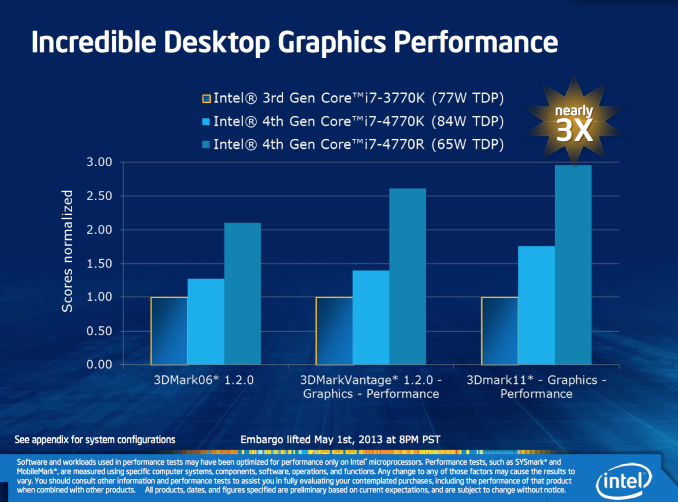 QuickSync performance will also improve as a function of increased number of EUs. There’s also DX11.1, OpenCL 1.2, OpenGL 4.0 and 4Kx2K support.
This is really the beginning of a new era. Intel isn't talking specifics about power savings here, but that's really where Iris and Iris Pro will shine. The fact that performance will finally be reasonable enough to actually play games is just icing on the cake. Kicking discrete GPUs out of non-gaming focused notebooks and replacing them with Iris Pro parts should keep performance high while significantly reducing power consumption. 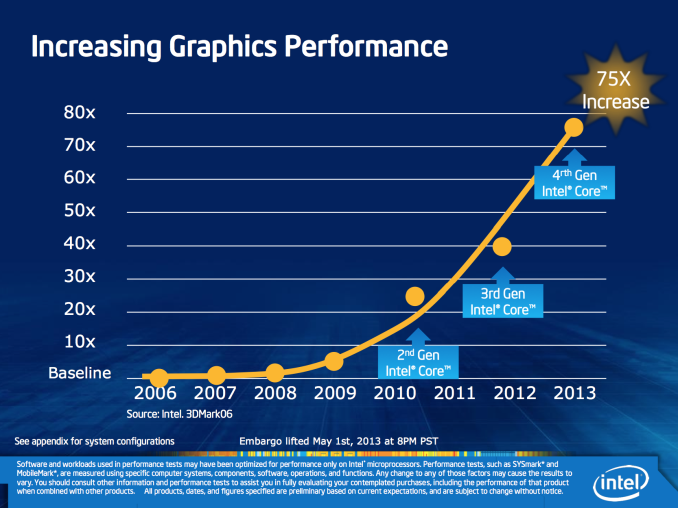 With Iris Intel is finally committed to graphics, and that's a very good thing.
Tweet
PRINT THIS ARTICLE
Comments Locked