Because stuttering is such a complex issue and AMD had such great knowledge into their drivers, AMD assumed that stuttering was occurring due to the applications and the OS, things that were out of their control. Furthermore because those things were out of their control, AMD assumed that they were happening to NVIDIA and Intel GPUs too. After all, there wasn’t any kind of competitive analysis to scientifically confirm this. AMD never saw that NVIDIA cards weren’t experiencing as much stuttering, and consequently never saw that they did in fact have more control over stuttering than they first thought. 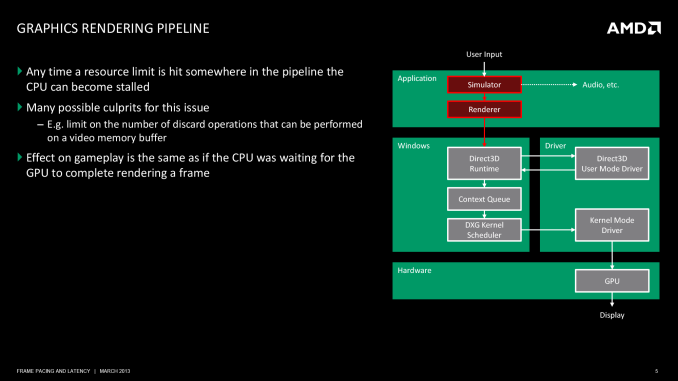 Ultimately it wasn’t until Scott Wasson and other journalists went to work with FRAPS and kept it up that it became obvious to AMD that they had a problem. FRAPS may be a coarse tool, but even it could see some of AMD’s stuttering issues.

Since that time AMD has been hard at work on fixing the issue, producing new driver builds later last year and in the first part of this year to address the issue. AMD’s latest drivers have been fixing bugs, engaging workarounds, and otherwise taking care of this issue so that they can be competitive with NVIDIA when it comes to stuttering.

There is still work to do – AMD quickly fixed their DX9 issues, while DX10 fixes are in the process of being rolled out – but in many ways this is a post-mortem on the issue rather than being an explanation of what AMD will do in the future. Not every game is fixed yet, but many are. Scott Wasson’s most recent results show an incredible improvement for AMD compared to where they were even 6 months ago.

The biggest changes AMD has made from here on out are that they’re now doing competitive analysis on stuttering and they’re explicitly looking for it in their tools, to ensure that stuttering issues don’t return (at least in as much as they are able to control). With many of the bugs and issues that lead to stuttering in the first place already fixed, AMD can use what they’ve learned to analyze future games and try to catch issues before the game is released, or at the very least fix it as quickly as possible.

AMD’s gameplan aside, there are two remaining questions on the subject that need to be dealt with. The first is what happened at a technical level to cause the stuttering in the first place, and what, if anything, can be done about the remaining stuttering.

The answer to the first question is that what went wrong depends on the game. AMD did not go into specific detail about individual games, but they did lay out the types of issues they ran across. For example, resource limits may occur in the application or the driver, triggering a stall that in turn triggers stuttering. Discarding the constant or vertex buffers too often was one such cause of this, as it would mean the driver would need to wait for one of the buffers to actually become freed up before the job could proceed.

Other times the issue was the driver itself misbehaving in a way AMD never expected. In one such case AMD’s driver was sporadically consuming far more CPU time than AMD intended, something AMD never even realized was possible. The end result was yet another block that triggers a stall that triggers stuttering.

Yet still other problems are in the application and the OS itself. As we’ve mentioned before AMD cannot fix these issues because they’re not under AMD’s control, but as it turns out AMD can effectively trick the OS and applications into behaving better. So AMD has implemented workarounds in their drivers for these application/OS issues, which doesn’t strictly fix the problem but will mitigate it.

A recurring theme in all of these issues was that they were easy to fix. It may only take AMD an hour to find the cause of a stuttering instance, and then even less time to make a driver change to deal with it. Stuttering on the whole is still a complex issue, but in AMD’s case they were easy fixes once AMD started looking for the problem.

Perhaps the most interesting thing about this entire process – and the most embarrassing thing for AMD – is not just that stuttering was occurring and they weren’t looking for it, but by not looking for stuttering they were leaving performance on the table. Stuttering doesn’t just impact the frame intervals, but many of those stalls where stuttering was occurring were also stalling the GPU entirely, reducing overall performance. One figure AMD threw around was that when they fixed their stuttering issue on Borderlands 2, overall performance had increased by nearly 13%, a very significant increase in performance that AMD would normally have to fight for, but instead exposed by an easy fix for stuttering. So AMD’s fixing their stuttering has not only resolved that issue, but in certain cases it has helped performance too.

This isn’t to say that AMD can fix all forms of stuttering. As we’ve already discussed, Windows isn’t a real time operating system and the PC platform itself is highly variable. Especially in resource constrained scenarios it’s simply not going to be possible to fix all forms of stuttering. If the CPU gets busy and the Present call from the application gets held up, then there’s nothing AMD can do other than to process it once it does arrive. This is the purpose of the context queue, to help smooth things out at the cost of some latency.

Moving on, though it’s outside the scope of this article for both a lack of time and a lack of tools, we will be looking at stuttering on AMD cards and NVIDIA cards as the necessary tools become available. AMD hasn’t fixed all of their issues yet and they waste no time admitting to it, so we will want to track their progress and see just how far along they are in bringing this issue under control.

Finally, we wanted to spend a bit more time talking about FRAPS in relation to what AMD discovered, and why FRAPS may still see issues that are not present. 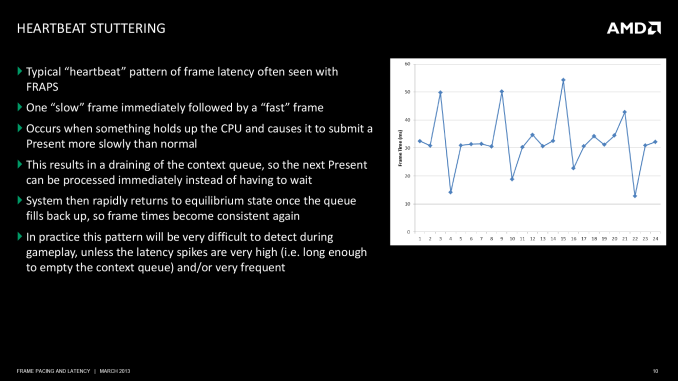 The above is what AMD is calling the heartbeat pattern, and it’s something FRAPS is reporting even in some of the games they’ve fixed. This highlights one of the problems with trying to monitor frame intervals based on Present calls, as the context queue is absorbing the uneven frame dispatch, but FRAPS doesn’t realize it.