When it comes to stuttering there’s really two classes of stuttering that need to be discussed. The first is single-GPU stuttering as we’ve discussed in the previous pages, where driver issues, application issues, and the context buffer all interact to influence the pace for how frames are doled out before finally being rendered and presented. The second type of stuttering, micro-stuttering, is endemic to multi-GPU configurations. In micro-stuttering on top of all of the other issues encountered with single-GPU stuttering, there are also further variance and frame interval issues introduced due to how multi-GPU configurations split their workloads.

In brief, in multi-GPU setups, be it single-card products like the GTX 690 or multiple cards such as a pair of 7970s, the primary mode of splitting up work is a process called Alternate Frame Rendering (AFR). In AFR, rather than have multiple GPUs working on a single frame, each GPU gets its own frame. This method has over time proven to be the most reliable method, as attempting to split up a single frame over multiple GPUs (with their relatively awful interconnect) has proven to be unreliable and difficult to get working. AFR in contrast is by no means perfect and has to deal with inter-frame dependency issues – where the next frame relies in part on the previous frame – but this is still easier to implement and more consistent than previous efforts at splitting frames.

Moving on, due to the mechanisms of AFR, it can further impact the frame intervals and as a result whether stuttering is perceived. To do AFR well it’s necessary to pace the output of each GPU such that each GPU is delivering a rendered frame at as even a rate as possible; not too soon after the previous frame, and not too late such that the following frame comes up quickly. In a 2 GPU setup, which is going to be the most common, this means the second GPU needs to produce a finished frame when the first GPU is roughly half-way done with its current frame. Should this fail to happen then we have micro-stuttering. 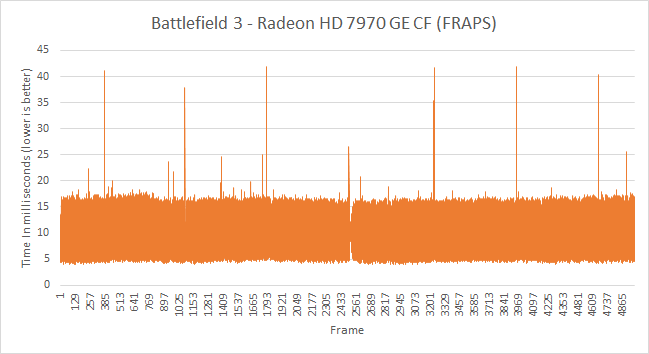 Micro-stuttering has been a longstanding issue on multi-GPU setups. Both NVIDIA and AMD have worked on the issue to various degrees, but at the end of the day multi-GPU setups have never proven to be as reliable as single-GPU setups, which is why our editorial position on the matter has been to always favor single powerful GPUs over multiple GPUs when at all possible. To that end, just as FRAPS has ignited an interest in single-GPU stuttering issues, it has also ignited an interest in multi-GPU stuttering issues.

Multi-GPU stuttering has become an important issue for AMD just as single-GPU stuttering has, and AMD is working on a resolution for it. That resolution will come in or around a July driver drop, at which point AMD will introduce some new driver options to control how their cards deal with the issue. In the meantime however micro-stuttering and how AMD’s multi-GPU technology compares to NVIIDA’s multi-GPU technology is likely to become a bigger issue before AMD can push out their new driver. So AMD may be spending the next couple of months on the defensive. 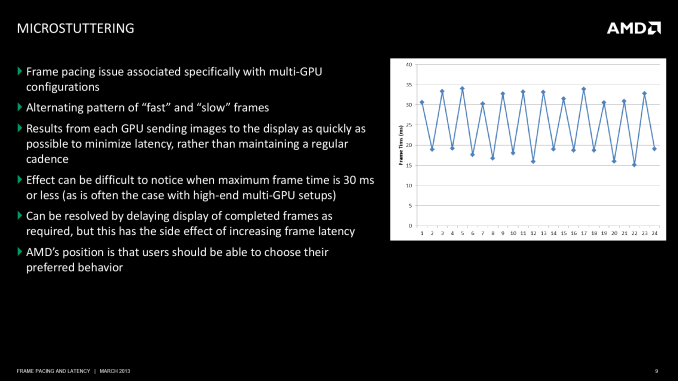 AMD’s current position on micro-stuttering is that they are favoring latency (and not frame intervals) above all else. By keeping their latency low and as even as possible the resulting input lag from multi-GPU setups is reduced, making the experience more responsive for the user. This is a position that’s essentially in alignment with how they’re handling single-GPU stuttering too, but in the single-GPU world there isn’t a deliberate frame pacing aspect to take into consideration since they merely need to render frames as fast as they receive them.

In any case, AMD’s position on the issue has been one where they clearly still think they’re right, but also one where they’re going to lighten up on their position regardless. The alternative approach to favoring latency is to favor the frame interval, which in the case of multi-GPU setups means focusing on frame pacing. By deliberately delaying frames AMD can ensure they arrive more evenly, but in doing so they would increase the latency in the rendering pipeline, and ultimately the latency the user experiences. AMD already does this to some degree, but today it’s not being done explicitly and favored over latency concerns, which is what’s going to change.

In a typical AMD move, AMD will ultimately be leaving this up to the user. In their July driver AMD will be introducing a multi-GPU stuttering control that will let the user pick between an emphasis on latency, or an emphasis on frame pacing. The former of course being their current method, while the latter would be their new method to reduce micro-stuttering at the cost of latency.

We don’t have any more details on this driver or AMD’s frame pacing method at this time, but in our conversation with AMD they didn’t sound like they were worried about having any problems implementing explicit frame pacing, and that it was merely a matter of the process taking a while. Frame pacing itself can cause its own stutter issues – holding back one frame but not another can sometimes make the frame display evenly, but from a simulation step only a few milliseconds after the previous step – but ultimately the pacing process will cause the simulation to try to match the GPU and pace itself accordingly, so it would be a transient issue.

On a final note, more so than even single-GPU stuttering, multi-GPU stuttering is something that unfortunately FRAPS is poorly prepared for. By looking at Present calls it’s completely blind to how the GPU is doing any frame pacing, which means it’s currently difficult to see the impact of frame pacing short of a high-speed camera. As further tools are developed that let us analyze the end of the rendering chain, this will allow us to more properly analyze how frame pacing works and what its true impact on the user is.