While we don’t normally run 3DMark for our CPU and GPU reviews, we do like to run the tests for our system and notebook reviews. The reason is simple: we don’t usually have long-term access to these systems, so in six months or a year when we update benchmarks we don’t have the option to go back and retest a bunch of hardware to provide current results. That’s not the case on desktop CPUs and GPUs, which explains the seeming discrepancy. 3DMark has been and will always be a synthetic graphics benchmark, which means the results are not representative of true gaming performance; instead, the results are a ballpark estimate of gaming potential, and as such they will correlate well with some titles and not so well with others. This is the reason we benchmark multiple games—not to mention mixing up our gaming suite means that driver teams have to do work for the games people actually play and not just the benchmarks.

The short story here (TL;DR) is that just as Batman: Arkham City, Elder Scrolls: Skyrim, and Far Cry 3 have differing requirements and performance characteristics, 3DMark results can’t tell you exactly how every game will run—the only thing that will tell you how game X truly scales across various platforms is of course to specifically benchmark game X. I’m also more than a little curious to see how performance will change over the coming months as 3DMark and the various GPU drivers are updated, so with version 1.00 and current drivers in hand I ran the benchmarks on a selection of laptops along with my own gaming desktop.

I tried to include the last two generations of hardware, with a variety of AMD, Intel, and NVIDIA hardware. Unfortunately, there's only so much I can do in a single day, and right now I don't have any high-end mobile NVIDIA GPUs available. Here’s the short rundown of what I tested:

Just a quick note on the above laptops is that I did run several overlapping results (e.g. HD 4000 with dual-core, quad-core, and ULV; A10-4600M with several dGPU options), but I’ve taken the best result on items like the quad-core HD 4000 and Trinity iGPU. The Samsung laptop also deserves special mention as it supports AMD Dual Graphics with HD 7660G and 7670M; my last encounter with Dual Graphics was on the Llano prototype, and things didn’t go so well. 3DMark is so new that I wouldn’t expect optimal performance, but I figured I’d give it a shot. Obviously, some of the laptops in the above list haven’t received a complete review, and in most cases those reviews are in progress.

And with that out of the way, here are the results. I’ll start with the Ice Storm tests, followed by Cloud Gate and then Fire Strike. 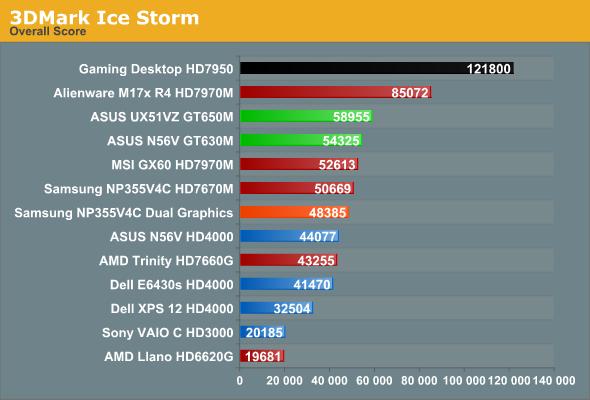 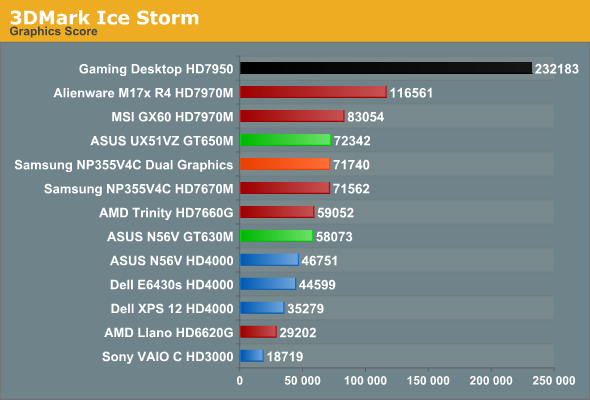 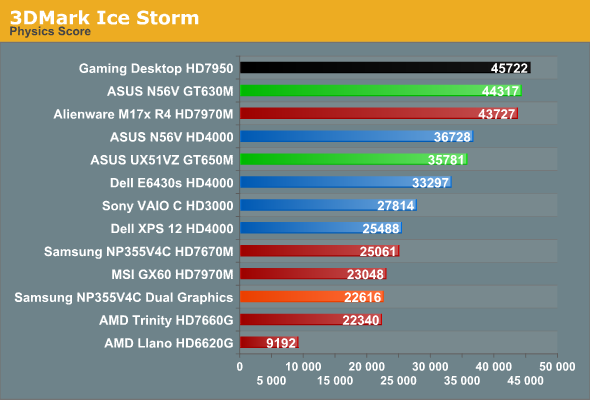 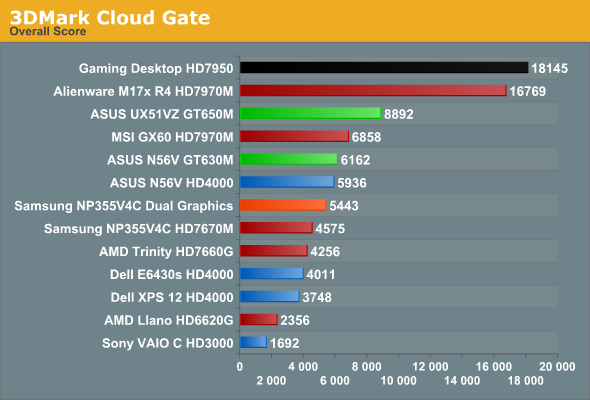 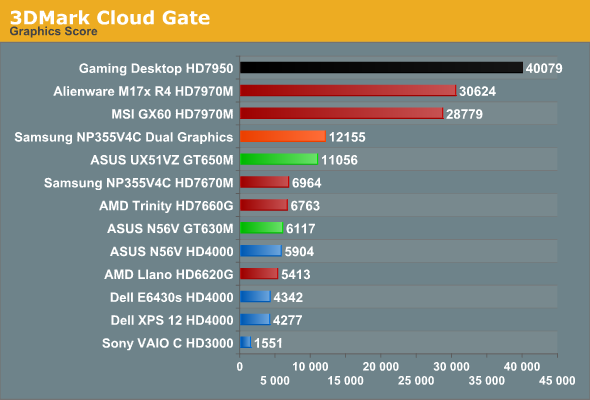 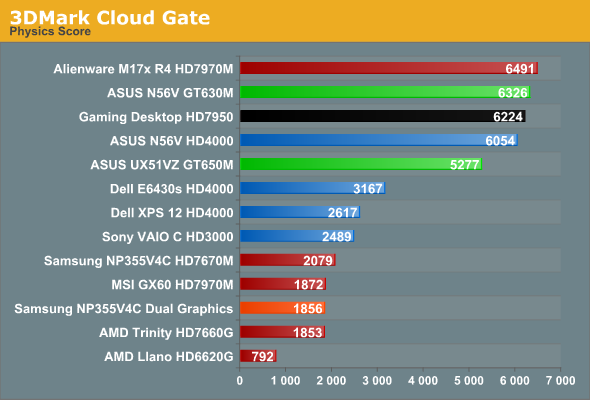 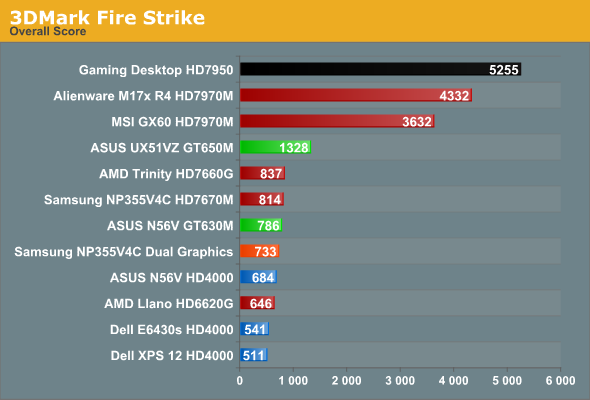 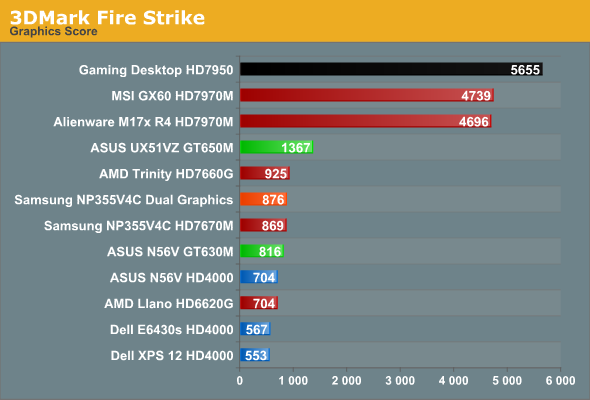 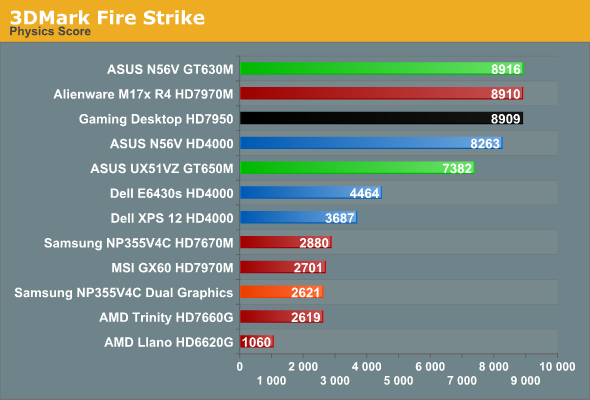 As expected, the desktop typically outpaces everything else, but the margins are a bit closer than what I experience in terms of actual gaming. Generally speaking, even with an older Bloomfield CPU, the desktop HD 7950 is around 30-60% faster than the mobile HD 7970M. Thanks to Ivy Bridge, the CPU side of the equation is actually pretty close, so the overall scores don’t always reflect the difference but the graphics tests do. The physics tests even have a few instances of mobile CPUs besting Bloomfield, which is pretty accurate—with the latest process technology, Ivy Bridge can certainly keep up with my i7-965X.

Moving to the mobile comparisons, at the high end we have two laptops with HD 7970M, one with Ivy Bridge and one with Trinity. I made a video a while back showing the difference between the two systems running just one game (Batman), and 3DMark again shows that with HD 7970M, Trinity APUs are a bottleneck in many instances. Cloud Gate has the Trinity setup get closer to the IVB system, and on the Graphics score the MSI GX60 actually came out just ahead in the Fire Strike test, but in the Physics and Overall scores it’s never all that close. Physics in particular shows very disappointing results for the AMD APUs, which is why even Sandy Bridge with HD 3000 is able to match Llano in the Ice Storm benchmark (though not in the Graphics result).

A look at the ASUS UX51VZ also provides some interesting food for thought: thanks to the much faster CPU, even a moderate GPU like the GT 650M can surpass the 3DMark results of the MSI GX60 in two of the overall scores. That’s probably a bit much, but there are titles (Skyrim for instance) where CPU performance is very important, and in those cases the 3DMark rankings of the UX51VZ and the GX60 are likely to match up; in most demanding games (or games at higher resolutions/settings), however, you can expect the GX60 to deliver a superior gaming experience that more closely resembles the Fire Strike results.

The Samsung Series 3 with Dual Graphics is another interesting story. In many of the individual tests, the second GPU goes almost wholly unused—note that I’d expect updated drivers to improve the situation, if/when they become available. The odd man out is the Cloud Gate Graphics test, which scales almost perfectly with Dual Graphics. Given how fraught CrossFire can be even on a desktop system, the fact that Dual Graphics works at all with asymmetrical hardware is almost surprising. Unfortunately, with Trinity generally being underpowered on the CPU side and with the added overhead of Dual Graphics (aka Asymmetrical CrossFire), there are many instances where you’re better off running with just the 7670M and leaving the 7660G idle. I’m still working on a full review of the Samsung, but while Dual Graphics is now at least better than what I experienced with the Llano prototype, it’s not perfect by any means.

Wrapping things up, we have the HD 4000 in three flavors: i7-3720QM, i5-3360M, and i7-3517U. While in theory they iGPU is clocked similarly, as I showed back in June, on a ULV platform the 17W TDP is often too little to allow the HD 4000 to reach its full potential. Under a full load, it looks like HD 4000 in a ULV processor can consume roughly 10-12W, but the CPU side can also use up to 15W. Run a taxing game where both the CPU and iGPU are needed and something has to give; that something is usually iGPU clocks, but the CPU tends to throttle as well. Interestingly, 3DMark only really seems to show this limitation with the Ice Storm tests; the other two benchmarks give the dual-core i5-3360M and i7-3517U very close results. In actual games, however, I don’t expect that to be the case very often (meaning, Ice Storm is likely the best representation of how HD 4000 scales across various CPU and TDP configurations).

HD 4000 also tends to place quite well with respect to Trinity and some of the discrete GPUs, but in practice that’s rarely the case. GT 630M for instance was typically 50% to 100% (or slightly more) faster than HD 4000 in the ASUS N56V Ivy Bridge prototype, but looking at the 3DMark results it almost looks like a tie. Don’t believe those relative scores for an instant; they’re simply not representative of real gaming experiences. And that is one of the reasons why we continue to look at 3DMark as merely a rough estimate of performance potential; it often gives reasonable rankings, but unfortunately there are times (optimizations by drivers perhaps) where it clearly doesn’t tell the whole story. I’m almost curious to see what sort of results HD 4000 gets with some older Intel drivers, as my gut is telling me there may be some serious tuning going on in the latest build.