Compute: What You Leave Behind? 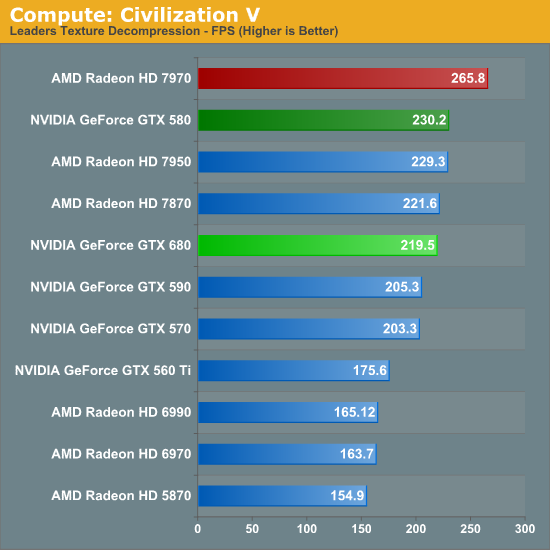 Remember when NVIDIA used to sweep AMD in Civ V Compute? Times have certainly changed. AMD’s shift to GCN has rocketed them to the top of our Civ V Compute benchmark, meanwhile the reality is that in what’s probably the most realistic DirectCompute benchmark we have has the GTX 680 losing to the GTX 580, never mind the 7970. It’s not by much, mind you, but in this case the GTX 680 for all of its functional units and its core clock advantage doesn’t have the compute performance to stand toe-to-toe with the GTX 580.

At first glance our initial assumptions would appear to be right: Kepler’s scheduler changes have weakened its compute performance relative to Fermi. 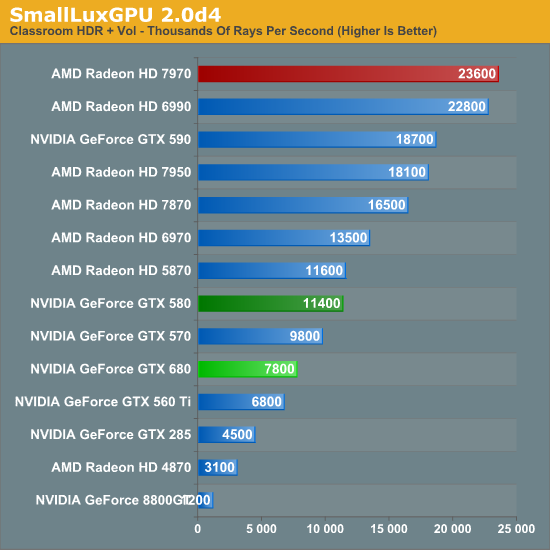 On that note, since we weren’t going to significantly change our benchmark suite for the GTX 680 launch, NVIDIA had a solid hunch that we were going to use SmallLuxGPU in our tests, and spoke specifically of it. Apparently NVIDIA has put absolutely no time into optimizing their now all-important Kepler compiler for SmallLuxGPU, choosing to focus on games instead. While that doesn’t make it clear how much of GTX 680’s performance is due to the compiler versus a general loss in compute performance, it does offer at least a slim hope that NVIDIA can improve their compute performance. 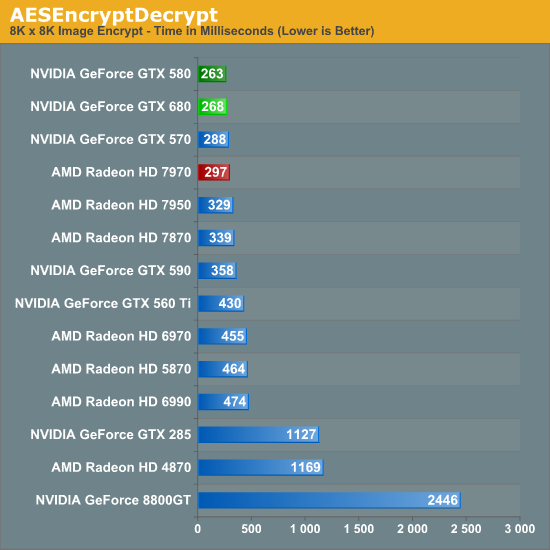 Starting with our AES encryption benchmark NVIDIA begins a recovery. GTX 680 is still technically slower than GTX 580, but only marginally so. If nothing else it maintains NVIDIA’s general lead in this benchmark, and is the first sign that GTX 680’s compute performance isn’t all bad.

For our fourth compute benchmark we wanted to reach out and grab something for CUDA, given the popularity of NVIDIA’s proprietary API. Unfortunately we were largely met with failure, for similar reasons as we were when the Radeon HD 7970 launched. Just as many OpenCL programs were hand optimized and didn’t know what to do with the Southern Islands architecture, many CUDA applications didn’t know what to do with GK104 and its Compute Capability 3.0 feature set.

To be clear, NVIDIA’s “core” CUDA functionality remains intact; PhysX, video transcoding, etc all work. But 3rd party applications are a much bigger issue. Among the CUDA programs that failed were NVIDIA’s own Design Garage (a GTX 480 showcase package), AccelerEyes’ GBENCH MatLab benchmark, and the latest Folding@Home client. Since our goal here is to stick to consumer/prosumer applications in reflection of the fact that the GTX 680 is a consumer card, we did somewhat limit ourselves by ruling out a number of professional CUDA applications, but  there’s no telling that compatibility there would fare any better.

We ultimately started looking at Distributed Computing applications and settled on PrimeGrid, whose CUDA accelerated GENEFER client worked with GTX 680. Interestingly enough it primarily uses double precision math – whether this is a good thing or not though is up to the reader given the GTX 680’s anemic double precision performance. 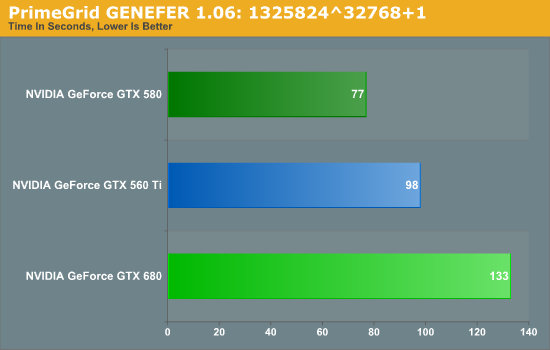 Because it’s based around double precision math the GTX 680 does rather poorly here, but the surprising bit is that it did so to a larger degree than we’d expect. The GTX 680’s FP64 performance is 1/24th its FP32 performance, compared to 1/8th on GTX 580 and 1/12th on GTX 560 Ti. Still, our expectation would be that performance would at least hold constant relative to the GTX 560 Ti, given that the GTX 680 has more than double the compute performance to offset the larger FP64 gap.

Instead we found that the GTX 680 takes 35% longer, when on paper it should be 20% faster than the GTX 560 Ti (largely due to the difference in the core clock). This makes for yet another test where the GTX 680 can’t keep up with the GTX 500 series, be it due to the change in the scheduler, or perhaps the greater pressure on the still-64KB L1 cache. Regardless of the reason, it is becoming increasingly evident that NVIDIA has sacrificed compute performance to reach their efficiency targets for GK104, which is an interesting shift from a company that was so gung-ho about compute performance, and a slightly concerning sign that NVIDIA may have lost faith in the GPU Computing market for consumer applications. 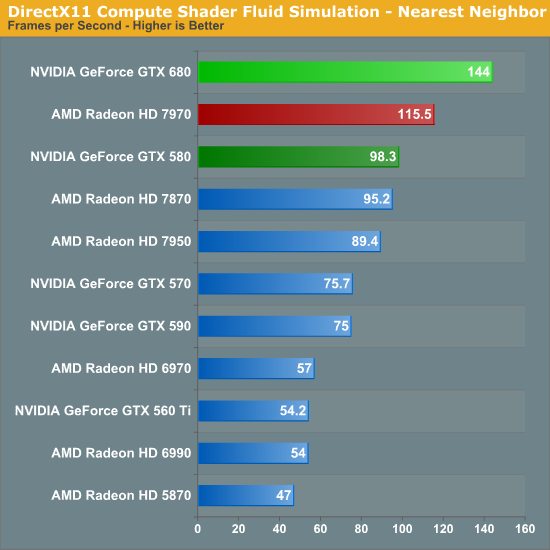 Redemption at last? In our final compute benchmark the GTX 680 finally shows that it can still succeed in some compute scenarios, taking a rather impressive lead over both the 7970 and the GTX 580. At this point it’s not particularly clear why the GTX 680 does so well here and only here, but the fact that this is a compute shader program as opposed to an OpenCL program may have something to do with it. NVIDIA needs solid compute shader performance for the games that use it; OpenCL and even CUDA performance however can take a backseat.