I’ve been heading up laptop reviews for AnandTech since 2006; to say that we’ve come a long way in that time would be a gross understatement. With my lengthy background in testing laptops, Anand thought it would be interesting to get my take on tablets in general, and the best way to do that is naturally to get a tablet into my hands. Cue the Three Stooges soundtrack…. 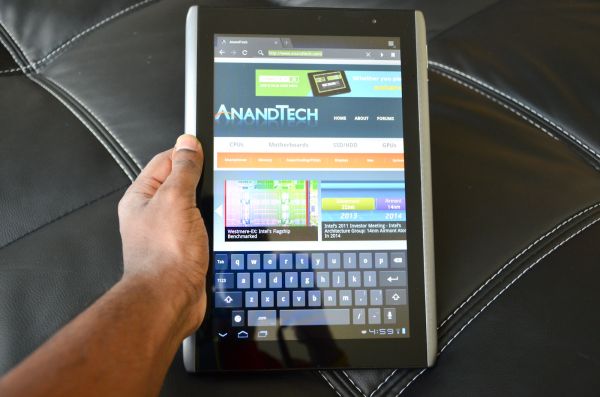 Okay, so it wasn’t that bad, but almost from the time I opened the Iconia A500 I have been searching for an answer to the question, “What do I need this for?” Anand has touched on this in his iPad/iPad 2 reviews, and if anything I’m even less inclined to need/want a tablet. A primary issue for me is that typing on a flat, glossy surface is unpleasant at best—yes, I can type faster on the A500 than on an iPod Touch, but that’s about the limit of my abilities. As Anand pointed out, tablets appear to function best as a media consumption device (e.g. limited typing required), and with plenty of computers already present in my house I just don’t need one more. Which is not to say that I didn’t like the tablet experience at some level; I just have a hard time figuring out where I would use it on a daily basis. Let me get into the things I like first, and then I can wrap up with the problems.

Assuming you have a tablet handy and you have WiFi or 4G connectivity, browsing the web works quite well. I’m probably lucky that my first real experience here is with Android 3.0, because the presence of tabs alleviates many of the problems on other platforms, and Tegra 2 is sufficiently fast that you can actually consume content rather than waiting for pages to load. I do have an iPod Touch, and by comparison the A500 is far better for surfing the Internet. As an example: loading AnandTech.com on the iPod can take 6-10 seconds per page; doing the same on the A500 loads most pages in 3-4 seconds. More importantly, browsing the web on a 1280x800 display is eminently better than qHD (960x540). Sitting on a couch watching TV, a tablet is a more desirable companion than a smartphone.

I also found the A500 quite useful in carrying around PDFs and other data that I wanted to read, without the need to fold out a full laptop. Even the smallest netbooks are still bulkier than a tablet, and they require a surface (e.g. your lap, a desk, etc.) in order to use properly. A tablet can easily be held in one hand while you interface with it using the other. If I were a doctor wandering around a hospital, a tablet would be far more convenient than a laptop or clipboard. I’m sure there are other professions that could make good use of a tablet, but what works for one may not work for all.

The display on the Acer A500 is a bit of a mixed bag for me. In terms of quality, it’s so much better than most of the laptops I’m used to seeing. White levels are brighter, black levels are lower, and for a TN panel the viewing angles are very good. I haven’t personally used an iPad or the ASUS Transformer, but I’m sure the IPS displays would win me over; the A500 is still quite good, however. My biggest complaints with the display are the large gap between the glass and the panel (Vivek already mentioned this), and then there’s the issue of smudges. Acer thankfully includes a microfiber cloth for cleaning the display, and you’ll need something like that because you inevitably get fingerprints all over the surface. Acer doesn’t include any form of carrying case or cover, and something like Apple’s Smart Cover would really be handy.

Now we get into the things that I really didn’t care for with the table experience. I discussed gaming performance earlier and came off unimpressed, but not because tablets can’t run games; we just need better titles. There are some fun casual games out there, but with Apple, NVIDIA, and others suggesting tablets have a future as gaming platforms, I’m just not seeing it.

What I really need for tablets to be useful is a killer app. I don’t carry around a clipboard ever, so they can’t fill that role. If I need to type an email or do any real work, a keyboard is generally a requirement. For everything that a tablet can do, a decent smartphone is similar and it can fit in your pocket. So on the one hand, I love having a larger 1280x800 display that I can actually use to browse the web, but on the other hand I just can't fit something like that into my current lifestyle. The most use I got out of the A500, outside of testing, was on Sundays when I took it to church. I was able to replace several bulky items (scriptures and lesson manual) with a single device that easily fits in a briefcase, and it was easier to use than a notebook. I could still do the same thing on a smartphone or iPod Touch, but reading books/manuals on the iPod isn’t very easy on the old eyes. I would assume that students could benefit from a tablet in a similar manner, provided they can get all of their books and other materials in digital format. Carrying a <2 lbs. tablet around campus in place of three heavy textbooks sounds like a great idea, but I’m not sure about note taking and I always had a soft spot for scribbling in the margins—plus I know a lot of engineering courses have open book exams, and I doubt they’d allow a tablet to qualify as a “book”.

For me, tablets in their current form end up feeling more like a fun gadget or a toy than a useful accessory. I can use it to accomplish plenty of tasks, but I can do those same tasks on other devices. As someone who has more than my share of gadgets, yes, I’d like to keep the A500 (or a similar tablet) around for occasional use, and my 8-year-old daughter definitely thinks it’s cool. If you don’t already have a laptop, a desktop PC, and a smartphone, though, I can’t see where a tablet rates as a higher priority purchase than those items.