For our gaming tests, we’ll start with our Low and Medium detail gaming benchmarks. We’ll save Asymmetrical CrossFire and High detail gaming for the next page. Note that we run all of the Low and Medium tests using DX9/DX10 modes, even on games that support DX11. There reason is simple: in nearly every game with DX11 support, enabling it often proves too taxing for anything but the fastest discrete GPUs—or in other cases, the graphics quality difference is negligible (Civilization V, Metro 2033, and Total War: Shogun 2 fall into this category). When we refresh our list of games later this year, we might start testing DX11 more often, but for now we’ll stick with DX9/10 on mainstream laptop testing. 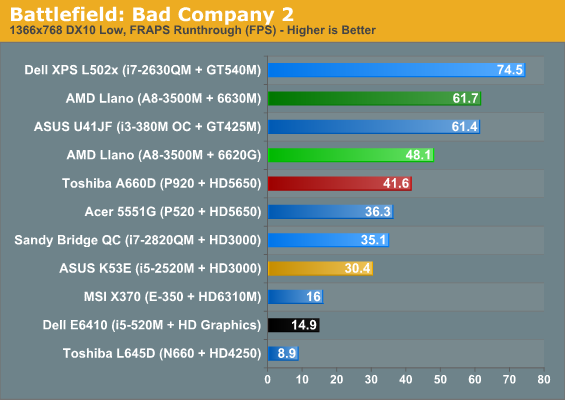 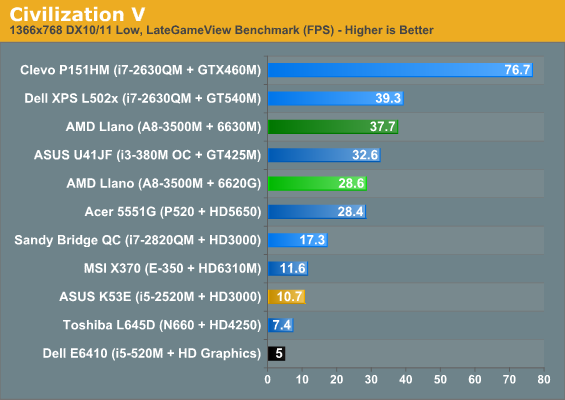 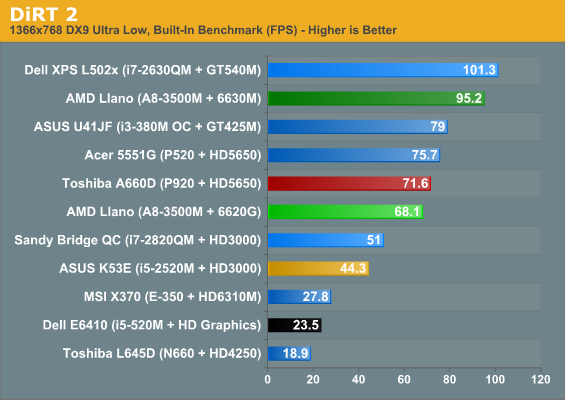 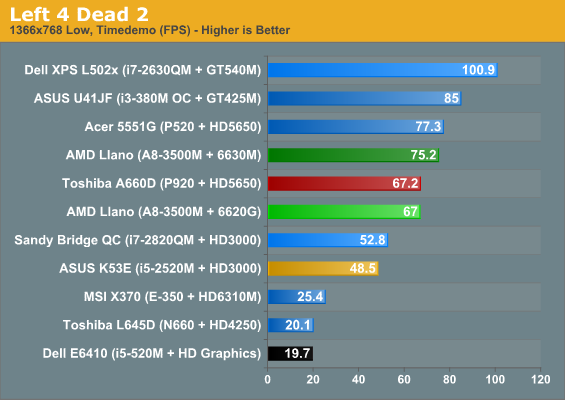 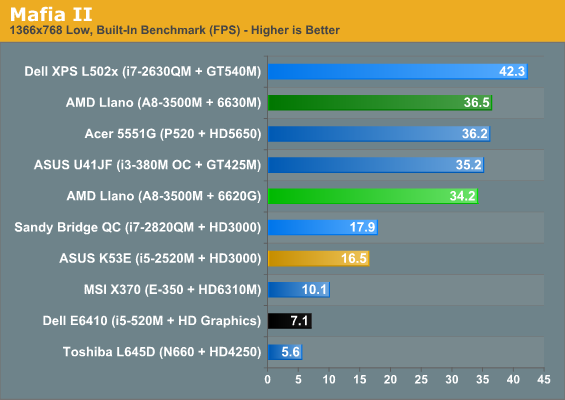 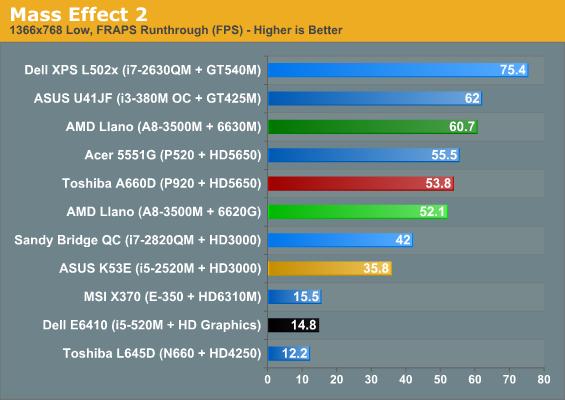 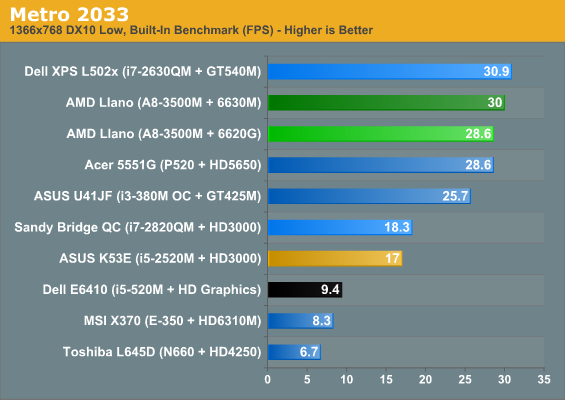 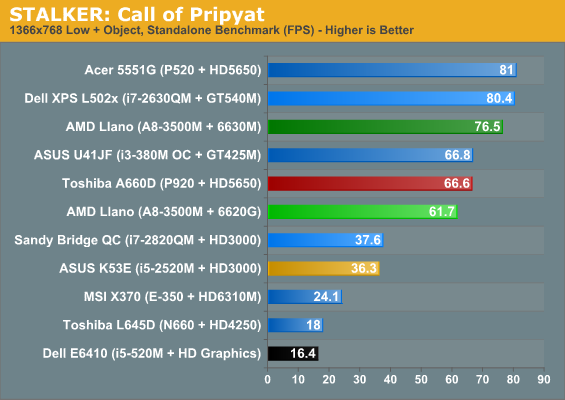 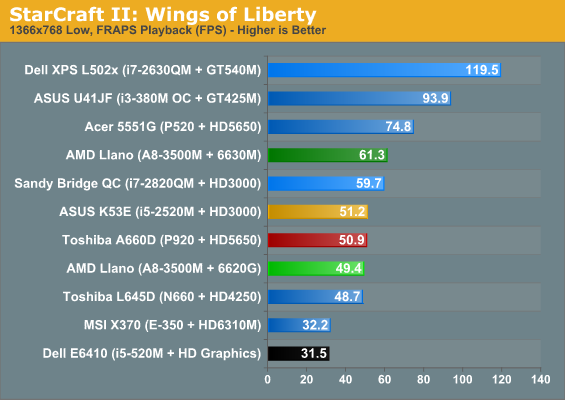 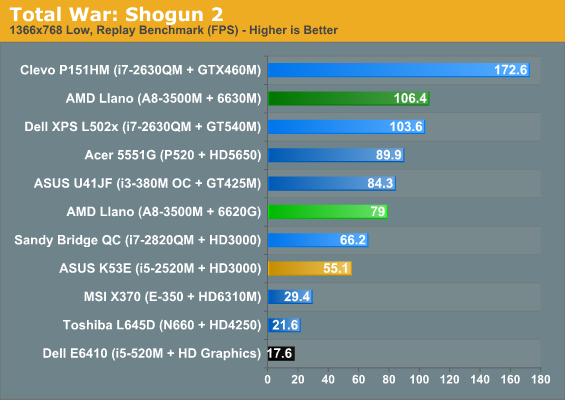 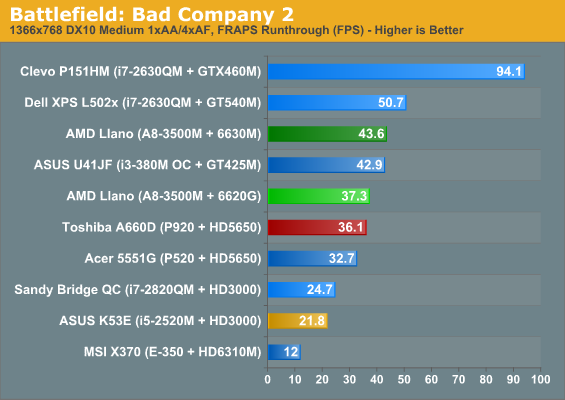 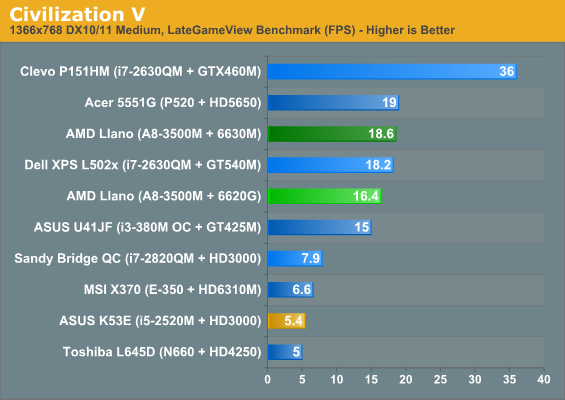 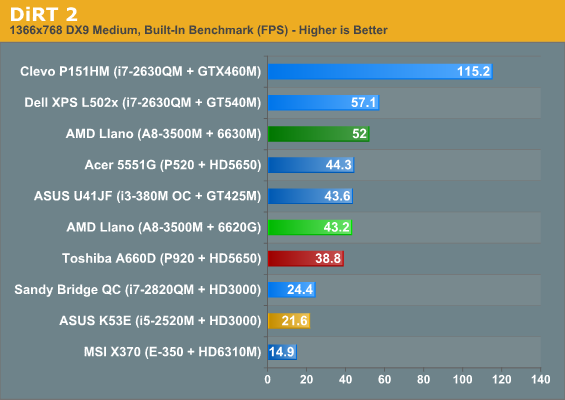 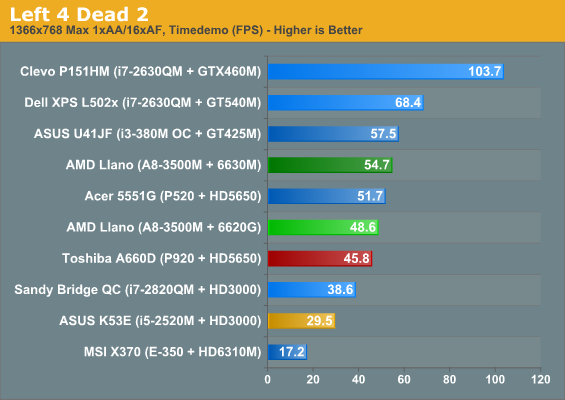 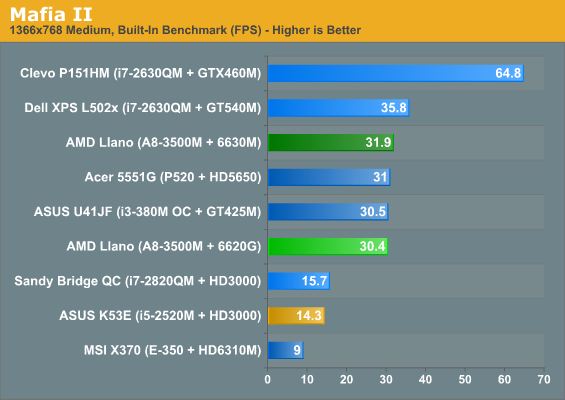 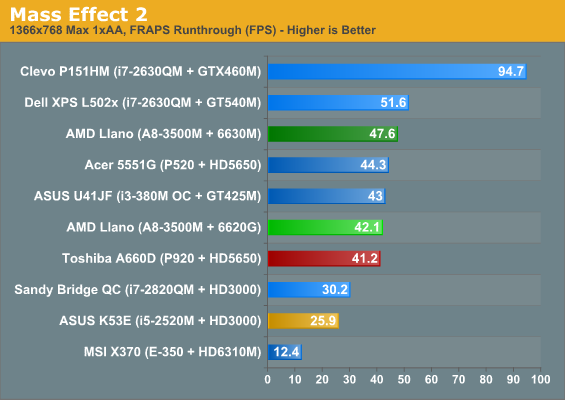 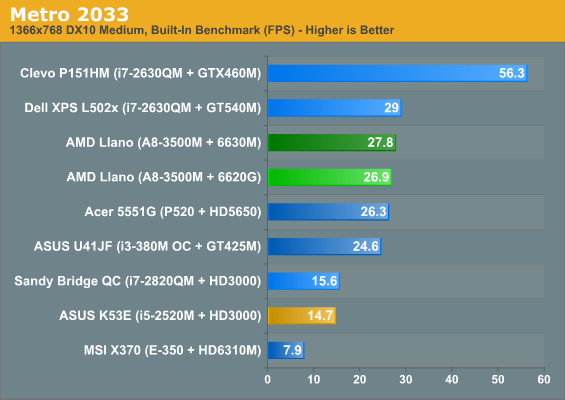 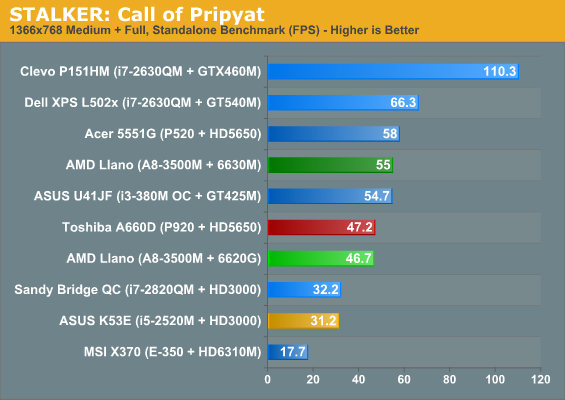 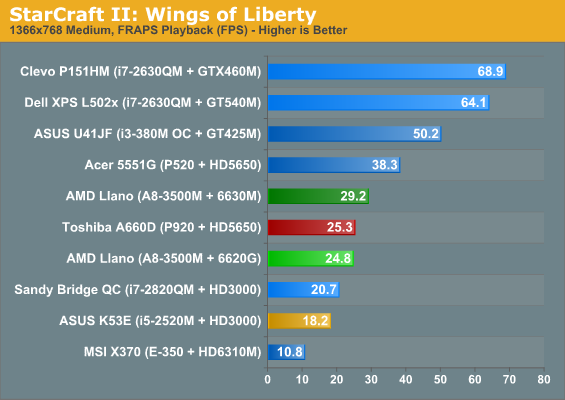 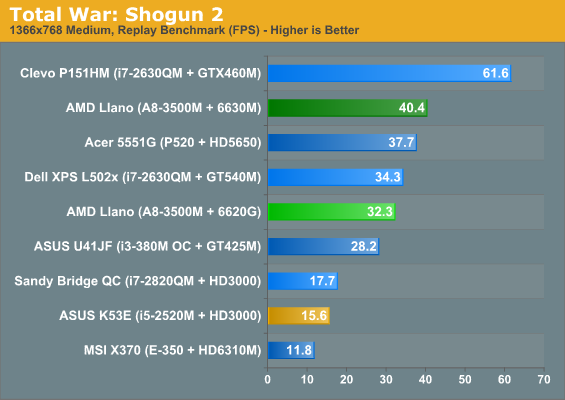 The age-old adage is that if you want a good gaming experience, you need to put more money into the graphics subsystem. With Llano, we need to modify that and add a corollary that you can trade a faster CPU for a better IGP/fGPU and end up with acceptable gaming performance. The 6620G is the first integrated GPU that can actually keep pace with the midrange discrete GPUs (at least on laptops—desktop GPUs are a different story). The Llano A8-3500M comes out ahead of AMD’s previous P920 + HD 5650 in many of the results, while A8-3500M + HD 6630M adds anywhere from 3-40% and averages 24% faster than the 6620G.

If we look at the competition, A8-3500M is anywhere from -3.5% to 167% faster than Intel’s HD 3000 with dual-core SNB, running everything at our Low presets. The sole victory for Intel comes in the lightly-threaded StarCraft II where Intel can really flex its Turbo Boost muscles. On the other end of the spectrum, HD 3000 turns in extremely poor results in Civilization V, Mafia II, and Metro 2033—games where Llano is at least playable. On average, the A8-3500M is 50% faster than HD 3000 at Low settings; move up to our Medium settings and Llano is 76% faster on average, with leads in every title ranging from 36% (StarCraft II is again the worst showing for AMD) to as much as 204% (Civilization V).

Bring the older Arrandale into the picture and things get even more lopsided. Never mind the fact that Arrandale’s HD Graphics are unable to break 30FPS in most of our test games at minimum detail (StarCraft II being the one exception); at our Low presets, A8-3500M puts Arrandale to shame, with performance anywhere from 57 to 472 percent faster and 223% faster on average. Obviously, you don’t want to try gaming on Arrandale’s IGP, which is where laptops like the ASUS U41JF come into play. You can pick up the U41JF for just over $800, but while the CPU is certainly faster, gaming performance with the GT 425M is only 15% faster than the stock A8-3500M on average, with Llano pulling wins in Civ5, Metro 2033, and TWS2 at Medium detail.

As a final note on gaming performance, while the A8-3500M isn’t clocked particularly high, there’s still more performance on tap in many games. Switching over to the 6630M dGPU improves performance by an average of 20% over the fGPU. A few titles only show an incremental performance increase (Metro 2033 and Mafia II); the biggest performance gains come in DiRT 2 and Total War: Shogun 2, with performance increases of 40%/35% respectively at low detail and 20%/25% at medium detail.

The target price of $700 for A8 laptops could make for a reasonably powerful and inexpensive gaming laptop, and if it’s like current AMD notebooks I suspect we’ll see A8 laptop prices dip into the low $600s. $800 for A8 Llano with the 6630M becomes a more difficult proposition, considering it would butt up squarely against laptops like the U41JF. Gaming performance would be similar, but the larger battery would give ASUS (and Intel) the lead in that area and gaming performance would be largely a wash. Depending on how much of a threat Intel deems Llano to be, we could see SNB laptops similar to the U41JF push pricing down, but for now Llano certainly fills a popular market niche.