We test the motherboard's USB 2.0 and USB 3.0 speed via CrystalDiskMark. We run the sequential test to find the optimum read/write speed, then perform a copy from the SSD to the USB device. We copy a set of 2867 files across 320 folders—95% of these files are small typical website files, and the rest (90% of the size) are the videos used in the Sorenson Squeeze test. Total size is 1.52GB 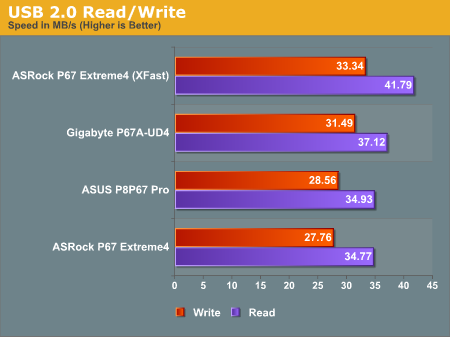 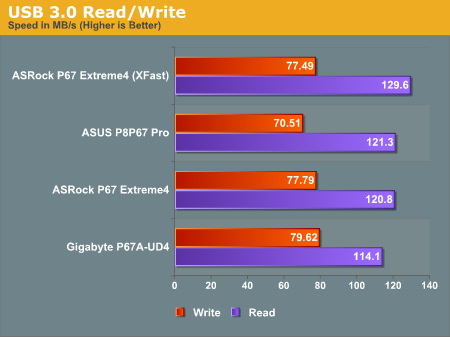 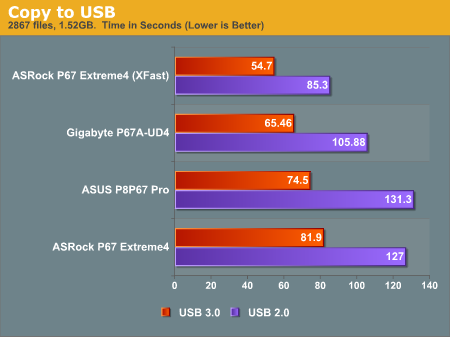 We also tested the ASRock XFast USB software. While making a slight difference to the sequential read/write speeds, it actually makes a difference in real-world situations where large amounts of small files need to be copied. USB 3.0 didn't benefit as much as USB 2.0, and it's worth noting that without XFast the USB 2.0 speed was the slowest of the three motherboards, but it does provide a benefit and turns the Extreme4 into the fastest overall USB choice.

This benchmark is actually one I have written. My full time job involves computational chemistry, so this first benchmark uses various algorithms for three-dimensional simulation and movement of independent particles. The algorithms either employ uniform random number generation or normal distribution random number generation (with periods exceeding 2^120), and vary in various amounts of trigonometric operations, conditional statements, generation and rejection, fused operations, etc. The benchmark runs through six algorithms for a specified number of particles and steps, and calculates the speed of each algorithm, then sums them all for a final score. This is an example of a real world situation that a computational scientist may find themselves in, rather than a pure synthetic benchmark. The benchmark is also parallel between particles simulated, and we test the single thread performance as well as the multi-threaded performance. 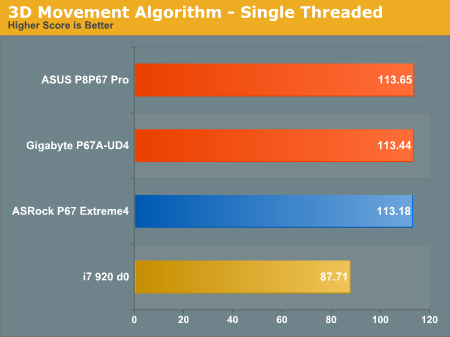 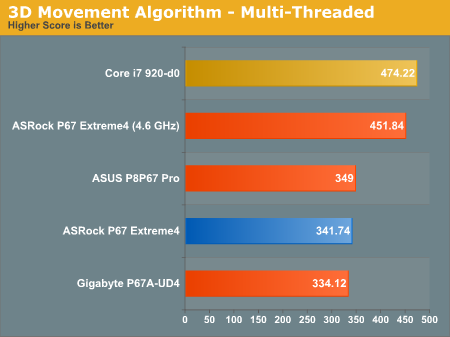 As expected, the single thread performance with the Sandy Bridge processor over the i7-920.  This is in part due to the difference in speed in single-thread mode, but also to the increased logic on the Sandy Bridge processor.  In the multi-threaded test, it's a case of available threads - the i5-2500K has 4 cores/4 threads available, whereas the i7-920 has 4 cores/8 threads available.  In both tests, the ASRock performs well, being beaten (just) by the P8P67 Pro.

With 64-bit WinRAR, we compress a set of 2867 files across 320 folders—95% of these files are small typical website files, and the rest (90% of the size) are the videos used in the Sorenson Squeeze test. Total size is 1.52GB. WinRAR x64 3.93 attempts to use multithreading when possible. 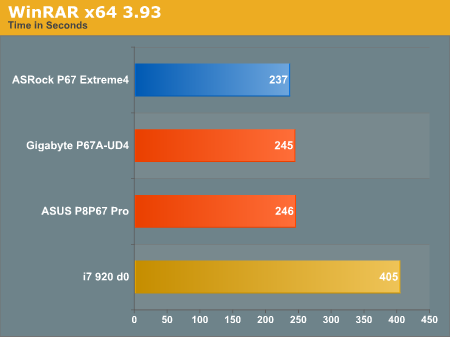 FastStone Image Viewer is a free piece of software I have been using for quite a few years now. It allows quick viewing of flat images, as well as resizing, changing color depth, adding simple text or simple filters. It also has a bulk image conversion tool, which we use here. The software currently operates only in single-threaded mode, which should change in later versions of the software. For this test, we convert a series of 170 files, of various resolutions, dimensions and types (of a total size of 163MB), all to the .gif format of 640x480 dimensions. 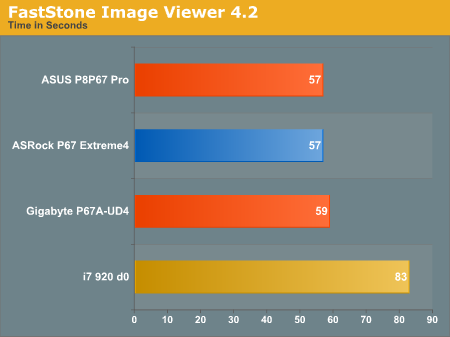 Sorenson Squeeze is a professional video encoder, complete and rife with options. For this test, we convert 33 HD videos, each a minute long and approximately 42 MB in size, to WMV 512KBps format. Squeeze can encode multiple videos at once, one for each thread. 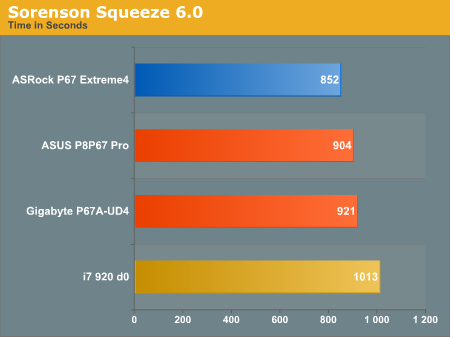 The ASRock board has relatively mediocre USB speeds, until XFast is used. In general, this board does fairly well across the entire 2D benchmark suite, either being at the top or near the top.