There's a lot of good to say about Windows Phone 7. Far more than I expected going into this review, to be honest.

The Facebook integration is the best I’ve seen on a smartphone. The Zune integration is similarly perfect. If you’re used to spending a good amount of money on iTunes every month you’ll have a better overall experience with Zune Pass on a Windows Phone. Exchange support, Office and the Email app are great too, it all just works. And unlike previous Microsoft OS launches, there’s no caveat necessary. Windows Phone 7 is both functional and attractive. 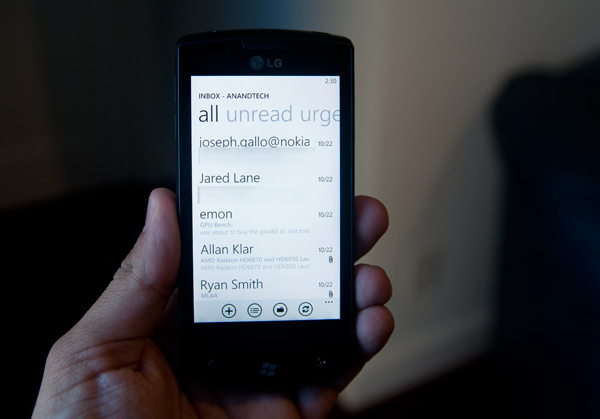 The UI is a thing of beauty. Microsoft got the style, customization and performance one hundred percent right on this thing. It makes iOS feel old and utilitarian. It’s funny to think that Microsoft was the one to out-simplify Apple in the UI department.

Microsoft made great use of GPU acceleration throughout the OS. Scrolling, panning, zooming, everything is ridiculously smooth. The OS is so polished in this regard that almost none of the third party apps I tried seemed to clear the bar Microsoft has set. It’s going to take a while for developers to do the right thing on this platform.

It’s not only third party developers at fault. Microsoft itself clearly has a lot to work on. The Xbox Live Extras app is inexcusably slow. And then there’s IE mobile. 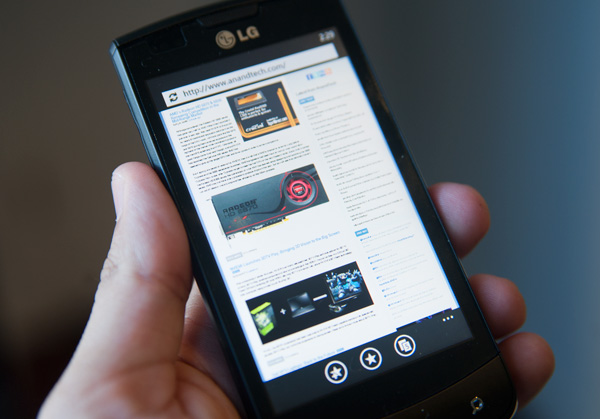 With JavaScript performance much lower than iOS and Android, IE mobile is measurable slower at loading web pages. The browser doesn’t actually feel much slower because of how smooth actually navigating around web pages is, but the web page loading performance must be improved. On top of that, web page legibility when zoomed out suffers due to a lack of font smoothing on very small fonts.

The application history and associated back button work well enough to make getting around WP7 pretty easy. Proper linking of addresses, phone numbers and web pages is nice and plays well with the back button. Ultimately adding copy & paste (coming in early 2011) will help but I’m not sure Microsoft can get around not having an actual way to switch between apps rather than just going back all the time. 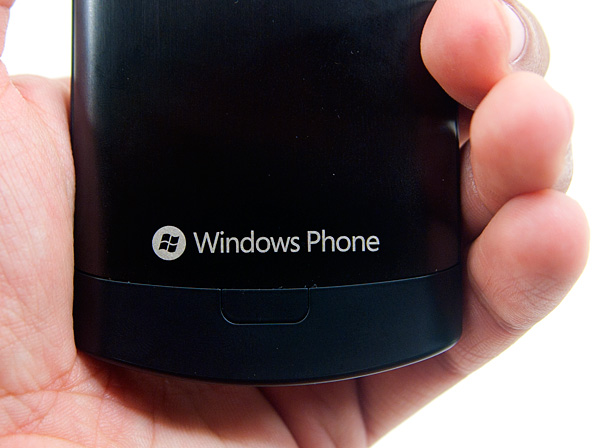 From a hardware standpoint I have to say that I believe Microsoft got the formula right. Windows Phone 7 is launching a lot like a gaming console that Microsoft allows other companies to manufacture. Microsoft dictates the hardware, and it’s up to the handset manufacturers to implement it as stylishly as possible. If the manufacturers want to provide additional features, they can do so through their own apps that can come preloaded on the device.

Some handset makers are undoubtedly upset that they won’t be able to use UI as a differentiation vector, but I believe this is a better option for general consumers. You get a consistent experience across all Windows Phones and you force the handset guys to deliver better hardware, rather than attempt to compete out of their realm of expertise with software.

Buying a Windows Phone is going to be a lot like buying a PC. Except this time around the pre-installed software will be a lot easier to get rid of and hopefully a lot less intrusive.

Of course, this approach only works if the OS is good enough from the get go, and in this case, it is.

I’ve always liked Microsoft as an underdog. It isn’t afraid to spend money to deliver a good user experience and the company has the talent to do some amazing things. It’s only when Microsoft becomes a monopoly that things go wrong. But in the fight to reach that point, we get great products and healthy competition.

With Windows Phone Microsoft is in underdog mode. The OS isn’t perfect but aside from the lack of apps, it’s competitive today. While I’m traveling I need the apps you can only get with a mature platform like Android or iOS (e.g. Yelp, BART app, etc...), but while home I don’t use those apps as much. Instead my smartphone behaves more like an SMS, phone, email, camera and web browsing device, and it’s in those areas that Windows Phone is easily just as good as the competition.

The app story and lack of conventional task switching are the two biggest issues facing Windows Phone 7 today. Both of which look to be very fixable problems. If you don’t own a modern smartphone, you probably won’t view either as an issue today and you can bide your time until Microsoft introduces them. If you’re migrating from an Android device or iPhone, depending on your app usage, Windows Phone may be too young for you. 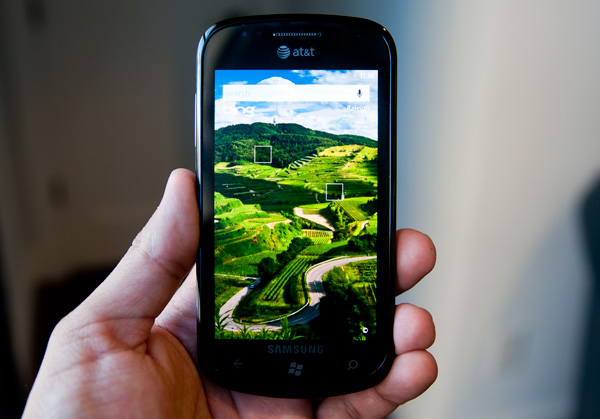 What I’m most excited about isn’t the fact that we’ll have another good competitor in the smartphone space, but rather the hope this gives me for Microsoft’s future products. Windows 7 was a nice OS, but it was nothing earth shattering and clearly did nothing to fend off Apple’s erosion of PC market share. Windows Phone 7 is a beacon of hope for Microsoft. If Windows Phone 8 and Windows 8 are designed with similar focus and clarity of thought as WP7 was, we may be looking at the beginning of Microsoft’s return.