Since we don't have hardware, we are left with the charts that ATI provided. Obviously, you need to take these benchmark results with a huge grain of salt, but for now it's all we have to go on. ATI provided results comparing performance of their new and old Performance (5650 vs. 4650) and Enthusiast (5870 vs. 4870) solutions, an additional chart looking at WUXGA single vs. CrossFire performance, and two more charts comparing performance of high-end and midrange ATI vs. NVIDIA. Here's what we have to look forward to, based on their testing. 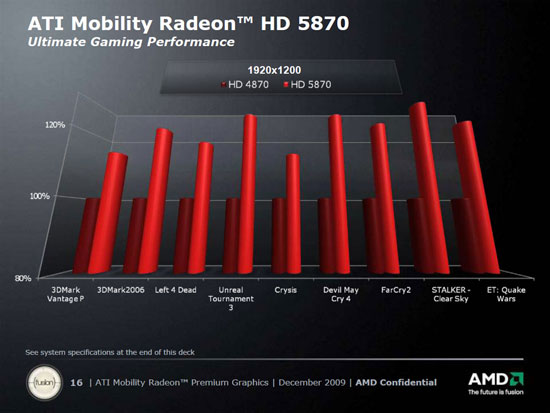 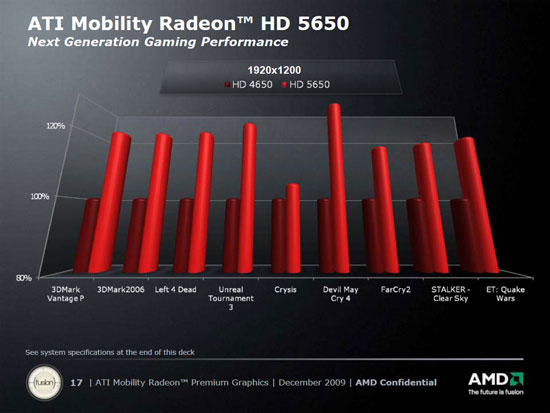 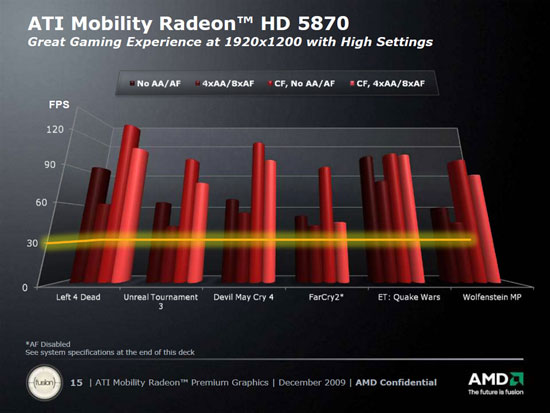 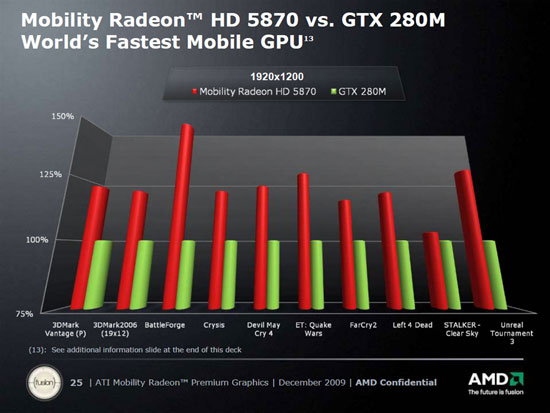 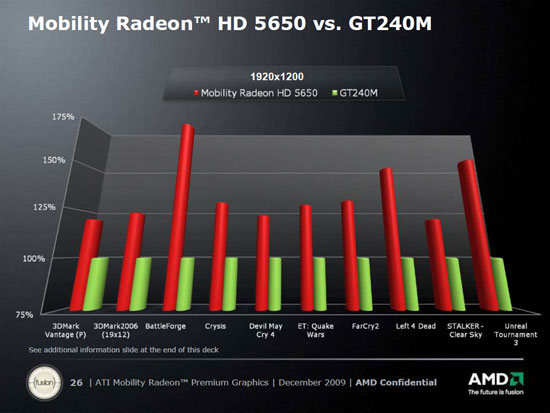 The performance is about what we would expect based on the specifications. Other than adding DX11 support, there's nothing truly revolutionary going on. The latest 5870 part has a higher core clock and more memory bandwidth - 27% more processing power and 11% more bandwidth compared to the standard HD 4870, to be exact. The average performance improvement appears to be 20~25%, which is right in line with those figures. Crysis appears to hit some memory bandwidth constraints, which is why the performance increase isn't as high as in other titles (see the 5650 slide for a better example of this).

Moving to the ATI vs. NVIDIA slides, it's generally pointless to compare theoretical GFLOPS between the ATI and NVIDIA architectures as they're not the same. The 5870 has a theoretical ~100% GFLOPS advantage over the GTX 280M but only 5% more bandwidth. The average performance advantage of the 5870 is around 25%, with BattleForge showing a ~55% improvement. Obviously, the theoretical 100% GFLOPS advantage isn't showing up here. The midrange showdown between the 5650 and GT 240M shows closer to a ~30% performance increase, with BattleForge, L4D, and UT3 all showing >50% performance improvements. The theoretical performance of the 5650 is 144% higher than the GT 240M, but memory bandwidth is essentially the same (the GT 240M has a 1% advantage). There may be cases where ATI can get better use of their higher theoretical performance, but these results suggest that NVIDIA "GFLOPS" are around 70% more effective than ATI "GFLOPS".

For reference, ATI uses a desktop system for the ATI vs. ATI charts and some form of Core 2 Duo 2.5GHz setup for the ATI vs. NVIDIA charts. This isn't really something fishy, considering there are as yet no laptops with the new ATI hardware and no one offers an identical laptop with support for both ATI and NVIDIA GPUs (well, Alienware has the m17x, but that's about as close as we get). Here are the test details: 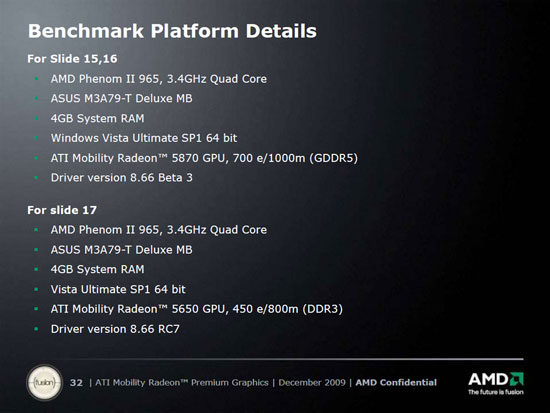 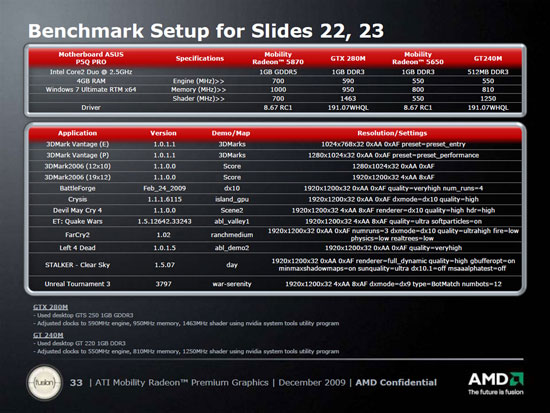 The first slide states a clock speed of 450MHz on the 5650 but the second says 550MHz. Given the figures in the ATI performance comparison, we think the 550MHz clock is correct.