With the 5700 series being built using TSMC’s 40nm process, and with their low target power, we should see some interesting results here.

We do need to note however that thanks to some badly timed broken hardware, we’re using our secondary test rig for noise and temperature data, so the results are not directly comparable to our 5800 series reviews. As a result we also only have power data for the 5770; we weren’t able to get power data on the 5750 in time for this article. 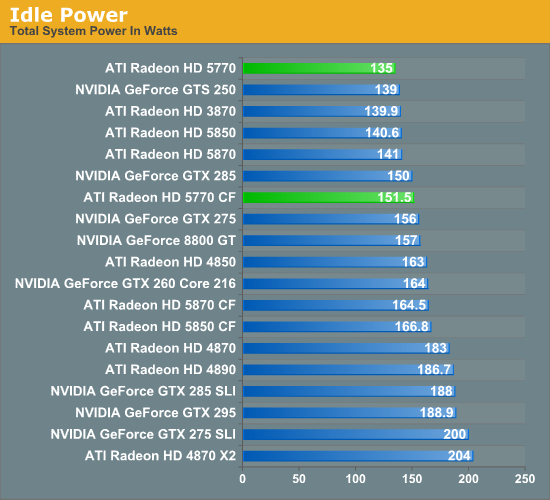 Thanks to the 40nm process and relatively simple nature of Juniper, the 5770 turns in the best idle power usage of all of our mainstream and high-end cards. At 135W it edges out the GTS 250, the 3870, and its bigger brothers the 5800 series. Coupled with a good CPU, and this should result in a system with very good idle power usage for the performance levels it provides.

We can also see the low power usage of an individual 5770 in our 5770 CF usage. There's a 16.5W difference, as the slave card gets to power down even further than 18W. 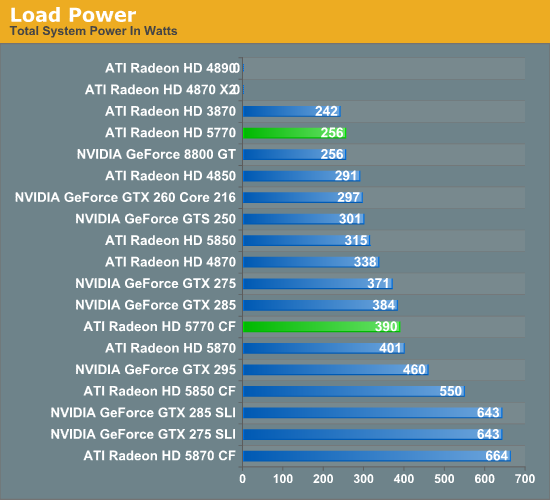 At 256W for load power, the 5770 isn’t quite the winner here like it is for idle power. The 3870 beats it by 14W at the cost of a significant degree of performance, while the 8800GT is neck-and-neck with the 4770, again with a decent-sized performance gap. Everything past here approaches 300W and beyond. As a result, even if it’s not the least power hungry card we have, it’s very close, and it’s certainly among the best for on a power-to-performance ratio.

Meanwhile looking at the Crossfire results, we see that there's a 134W difference between cards. As the Evergreen architecture allows us to go higher so long as the VRMs are safe, this appears to that situation in action. 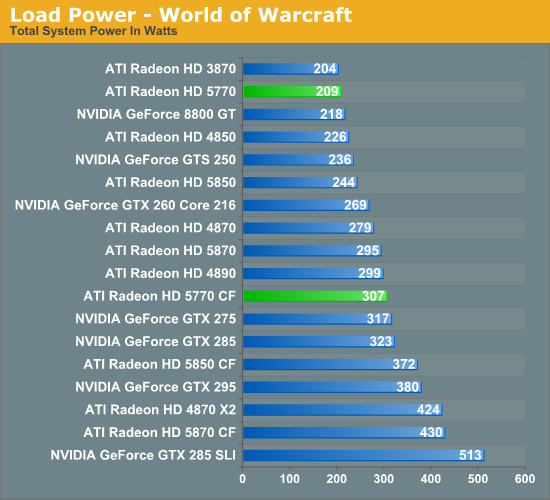 World of Warcraft gives us similar results. The 5770 still doesn’t come out on top, but its bested only by the 3870 and its significantly lower performance. The gap on the other side isn’t particularly large either, but the first card that can beat the 5770’s average gaming performance doesn’t show up until we hit the 5850. 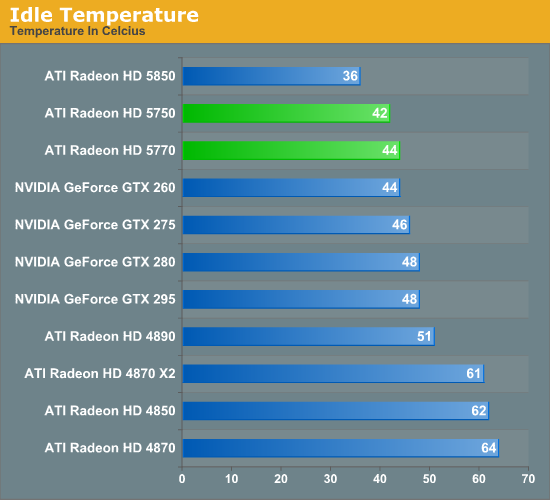 The 5700 series turns in some of our best idle temps, tying or beating everything besides a 5850. In fact we’re a bit surprised to see a 5850 win here given the lower idle power usage of the 5700 series, but the data doesn’t lie. 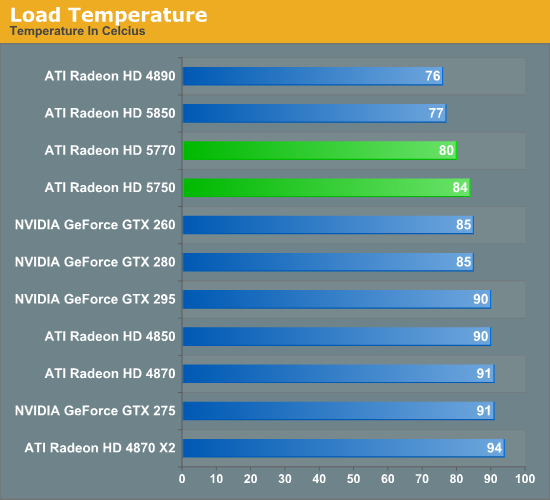 It’s load temperatures where all of the action is at. Again the 5700 series do quite well here, only losing to the 5850 and a very loud 4890. Compared to the rest of the 4800 series in particular, we’re a good 6C-11C cooler for a set of cards that offer similar to slightly less performance. Aren’t smaller manufacturing processes great?

However in spite of the 5750’s lower power consumption, it doesn’t do so well here in terms of temperature compared to the 5770, coming in 4C hotter. We’re going to chalk it up to the egg cooler being unable to match the 5770’s shrouded cooler. This of course makes the fact that the 5770’s shrouded cooler is going to eventually go away all the more meaningful, as conceivably the replacement coolers would end up being less effective. 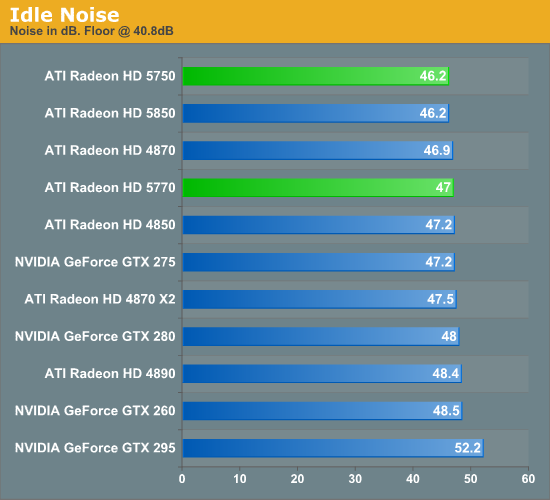 As is the case for most of the cards we test, at idle they’re virtually all the same. The 5700 series are no exception to this rule. 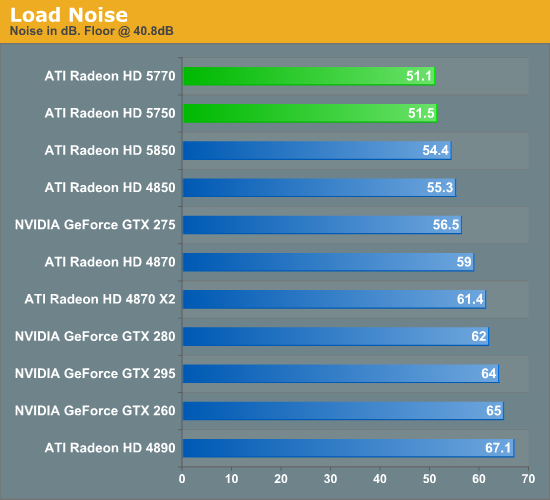 With the low power consumption of the 5700 series, their coolers don’t have to work very hard to reach their already low load temperatures. At 51dB, these are the quietest cards we’ve tested at this level of performance; we would need to drop down to something slower yet (like yesterday’s GT 220) to find something quieter.

We also can’t rule out the possibility of the 5750 going passive in the future, given its already dainty cooler. We’ve seen it done before on an 8800GT, which has a similar thermal envelope. This certainly has all the makings of the fastest passively cooled card on the market, if someone can build the right cooler.

This also leaves the door open to the idea of using the 5750 as an HTPC card. With bitstreaming audio support it’s the best HTPC card we’ve tested yet from a features standpoint, but we’re not convinced that it’s going to be the best thing out there given it’s >$100 price tag and the fact that it’s still power-hungry enough to need a PCIe power connector. In the long-term the 5600 series may be a better replacement given the same features and lower power consumption that a lower-performing part will offer, but that’s something we won’t be able to test until next year.