Thermalright specializes in cooling for the enthusiast market. Their CPU coolers are very well known, but they also market chipset, VGA, and RAM coolers, as well as thermal paste. Thermalright has always emphasized their design capabilities in the cooling market, and our test results confirm the excellent performance of their products. They also point to their advanced manufacturing processes, and they are ISO-9000 certified manufacturing plants.

Most hobbyists first heard of Thermalright when their SK-6 cooler appeared in the summer of 2001 and started winning most of the heatsink roundups. Since then Thermalright has become a well-respected name in high-end air cooling. Thermalright produced several well-known heatsinks for the AMD K8 and Pentium 4 sockets, such as the XP-120 and XP-90 heatsinks. You bought the Thermalright heatsink and paired it with the 120mm or 90mm fan of your choice - for low noise or massive air flow or some combination that met your needs. This approach has continued with their current offerings. 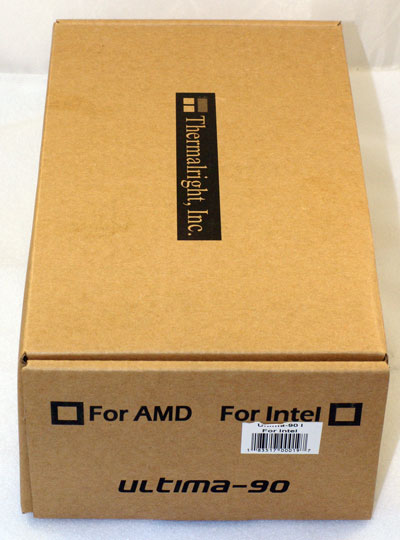 Product has been the emphasis at Thermalright, and packaging generally consists of the same-size sturdy brown box with custom foam inserts to protect the cooler. That has not changed with the Ultima-90. 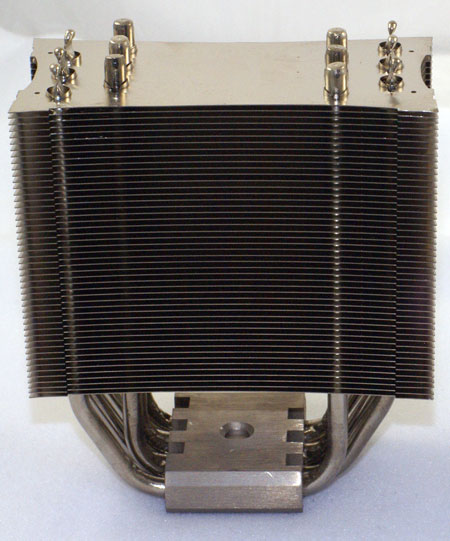 The cooler looks like an Ultra-120 eXtreme that has been on a diet. There are the same six heatpipe loops (12 risers) seen in the eXtreme, but the Ultima-90 body is closer in size to the Ultra-90. The Ultra-90 is 102x45x147, where the Ultima-90 is 115x55x139. That makes the Ultima-90 a little wider and deeper than the Ultra-90, but about 8mm shorter than the Ultra. It is smaller in all dimensions than the top-performing Ultra-120 eXtreme which is 132x63.44x160. Keep in mind that the eXtreme is already one of the smallest of the full heatpipe tower coolers and you will get a good idea of how small the Ultima-90 is relative to other heatpipe towers we have reviewed.

The Ultima-90 is also the first Thermalright we have tested with four sets of fan wire mounting holes. This means with the right fan wires you can mount two fans in a push pull configuration. Also unique is the support for both 120mm or 92mm fans. The slightly wider width provides a solid base for your favorite 120mm fan or a 92mm fan nestles solidly in the fin grooves. Two sets of fan wires are included - one set for mounting 120mm and the other for 92mm. 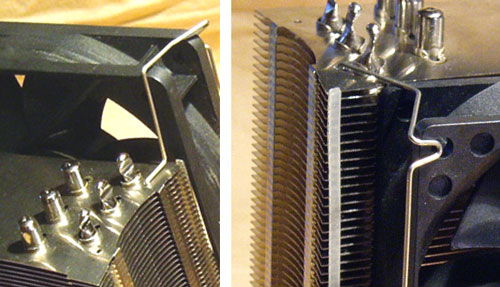 We have complained in past reviews that Thermalright limits the type of fans that can be used by supplying fan wires that would only mount postless fans. Thermalright has clearly been listening, because the new design can mount fans with posts or postless fans. Almost any 120mm or 90mm fan will mount on the new Ultima-90. 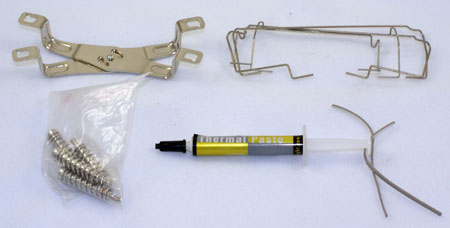 Accessories include a mounting base for under the motherboard and a top plate with spring loaded screws for Intel socket 775 and a clip for AM2 sockets. The mounting kit for AMD 745/939/940 is not included, but it is available as an optional accessory called the "939 Bolt Thru Kit". Thermalright also includes a small tube of premium thermal paste and installation instructions.

Mounting is much like other Thermalright coolers we have reviewed. The motherboard must be removed from the case for Intel 775 and a backplate is positioned through the holes in the motherboard. Thermal paste is applied to the CPU and the 775 holder is passed through the cooler and unfolded. The holder is then attached to the threaded screw holes on the backplate by screwing in the four spring-mounted screws attached to the holder. 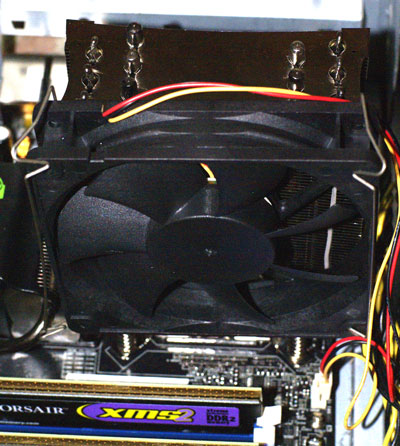 The final installation is very secure on Intel socket 775. The Ultima-90 weighs just 460g compared to the 790g of the eXtreme. The lighter weight helps in the feeling of security with the Ultima. The mounted heatsink has no tendency to shift or turn on its axis. Those who worry about the dangling weight of the large heatpipe towers will also be happier with the lower profile and weight that is only about a pound compared to the two pounds seen in many large heatpipe towers.

IMPORTANT: The test kit is a pre-production model. The Ultima-90 is now for sale and performance results have been confirmed with a production Ultima-90 cooler. The final production kit contains mounting parts that are different from the pre-production package. Please check current installation instructions at the Thermalright website for information on the contents of the shipping Ultima-90 kit.


Thermalright does not include fans with their top-line coolers so we selected a top 120mm and a 92mm fan for testing with the Ultima-90. For the 120mm fan we used the excellent Scythe S-FLEX SFF21F tested with the Ultra-120 eXtreme. 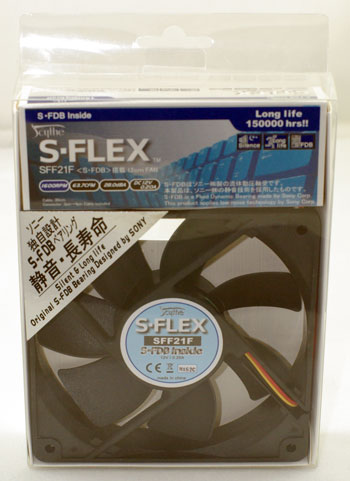 For the 92mm fan we chose the Panasonic Panaflo H1A, which is a very popular fan with cooling enthusiasts looking for high output and low noise with a history of long fan life. We extend our thanks to Frozen CPU for providing the fans for the Ultima-90 tests. 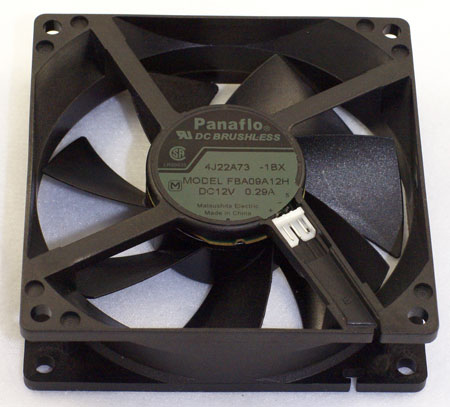 The Ultima-90 is both smaller and lighter than the top-line Ultra-120 eXtreme, but it features the same number of heat pipes in a similar configuration. With the ability to mount either 120mm or 92mm fans, the question is how much the size and weight shrink have compromised performance? It is great that the Ultima-90 is smaller and lighter than any of the top 120mm heatpipe towers, but unless the Ultima-90 performs close to the same level as the best 120 coolers it becomes consideration of whether what you give up justifies the savings in size or money. The Ultima-90, at around $50 retail, is $15 cheaper than the top Ultra-120 eXtreme.

The EVGA 680i is a difficult to fit board due to the copper-finned heatsink and fan cooling the Northbridge. You would expect the smaller and lighter Thermalright Ultima-90 to be an easier fit than the large coolers we have tested with 120mm fans. This is true since the cooler is only 115 mm deep, so that a 120mm fan overlaps each side just slightly. The Ultima-90 fit comfortably on the EVGA 680i. Installation was also an easy task on the ASUS Striker and ASUS Commando, and on the two new P35 boards - the ASUS P5K Deluxe and P5K3 Deluxe. The P5K3 Deluxe will likely become a fit test for any motherboard, since the heatpipes completely circle the CPU socket and connect various cooling heatsinks around the CPU socket.

The height of 139mm is also shorter than most 120 heatpipe towers. This means the Ultima-90 will fit some thin cases that couldn't handle the Thermalright Ultra-120 eXtreme, the Tuniq 120, or the Scythe Infinity. However, the Ultima-90 still cannot be considered a flat cooler. You will need to measure carefully to make sure it will fit your HTPC or rack-mount case