Since it was founded in 1999 Thermaltake has grown into a world-class company with a state-of-the-art testing and R&D facility based in Taiwan. Thermaltake is headquartered in Taiwan, but it has offices around the world, developing and manufacturing products like Liquid Cooling, Air Cooling, PC Enclosures and Power Supplies for every segment of the PC market. Today you will find Thermaltake cooling solutions around the world.

The Big Typhoon is a Thermaltake product that has had a long life in the marketplace. We first saw the Big Typhoon in early 2005, and at that time it was equipped with a fixed output 1300rpm fan. The VX is the latest version of Big Typhoon. The VX heatsink is identical to the original Big Typhoon with the fan changed to a variable speed (1300 - 2000rpm) with an attached fan speed control. As already mentioned the specifications for the VX fan are very similar to the specs for the MaxOrb fan. 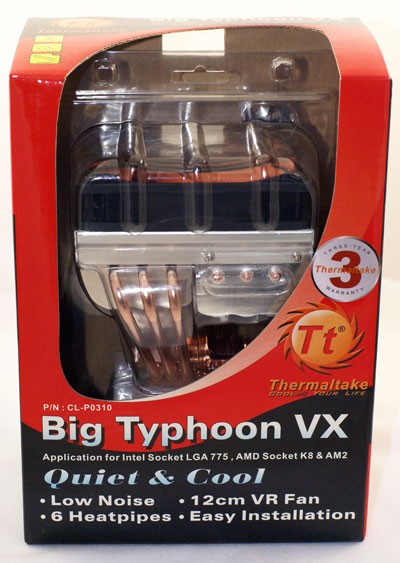 Thermaltake uses the same distinctive red and black colored packaging that is used on the MaxOrb and other Thermaltake products. The package is the same size as the MaxOrb package, but the Big Typhoon VX is a much larger cooler. The VX and a box of accessories are protected by a plastic clamshell inside the box. 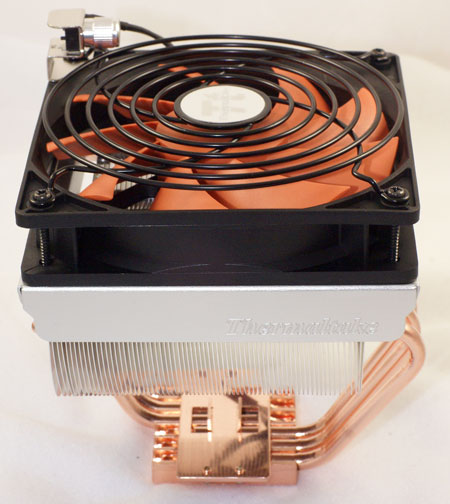 The cooler uses large vertical aluminum fins soldered to six heat pipes in a cantilever over the CPU. Cooling is provided by a 120mm fan that can be swapped for another fan if you wish. However, the VX fan has a built-in speed adjustment and can generate air flow as high as 86.5CFM at the highest speed. Noise levels are claimed to be in the range of 16dB-A on low speed to 24dB-A at high speed. 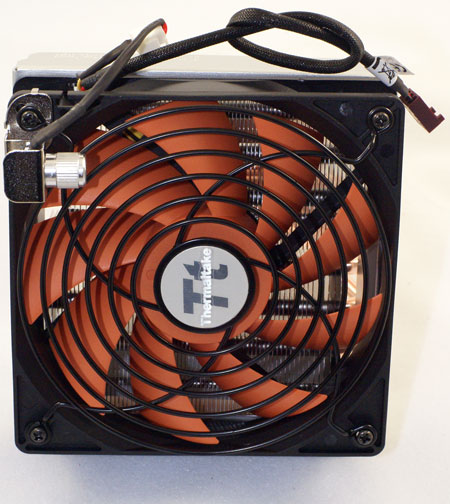 The fan is bright orange and does not contain an LED. Thermaltake uses a fan guard on the powerful fan which should provide protection for fingers that is missing on most 120mm fans. 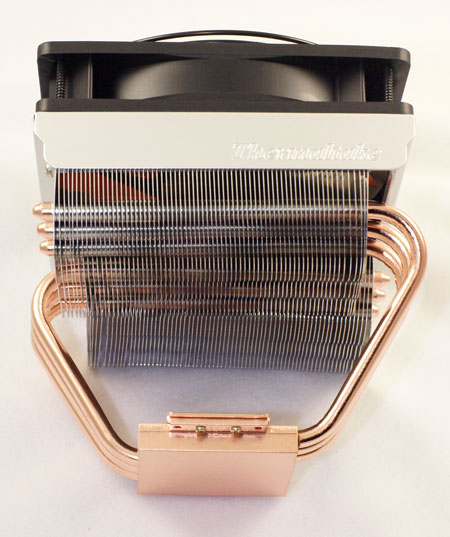 The cooling is further enhanced by six 6mm heatpipes extending from the copper base. These exit the base from opposite sides and create a very stable platform for the fin array and fan.

Accessories include mounting brackets for Intel socket 775 and AMD 754/939/940/AM2. Mounting of either Intel or AMD processors is very simple. The Intel 775 uses a four push-pin setup, while the AMD uses a pop-on-clip with a "turn to tighten" handle. The clip works with existing AMD/AM2 cages. 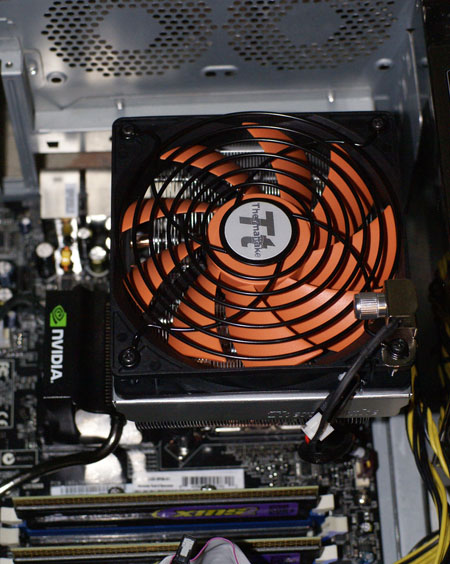 There is sufficient clearance below the fin/fan deck on the VX to make mounting possible on Intel 775 - even with the board installed in a case. You also need to be a bit of a contortionist to find a hand position that allows you to exert enough downward pressure to pop in the clips, at least on some motherboards. The only concern here is that the two-pound cooler is secured to the board with the Intel-style pop-clips. This worked fine, but this is a great deal of weight to hang off a tower mounted motherboard secured with just clips. You should be very cautious moving a mounted VX cooler if you have a tower case.

Our test system is Intel socket 775, but the Thermaltake Big Typhoon VX will mount on any recent AMD socket as well - including 754/939/940 and AM2. All the needed hardware is provided, and installation is very easy.

The VX is a large cooler, but it is shorter than the typical heatsink towers we have been reviewing. The EVGA 680i is a difficult to fit board due to the copper-finned heatsink and fan cooling the Northbridge. The raised deck made mounting the VX on the 680i quite simple. Installation was also an easy task on the ASUS Striker and ASUS Commando, and on the two new P35 boards - the ASUS P5K Deluxe and P5K3 Deluxe. The P5K3 Deluxe is almost a fit test for any motherboard, since the heatpipes completely circle the CPU socket and connect various cooling heatsinks around the CPU socket.