There are an incredible number of tests we wanted to run in order to explore all the different aspects of gaming on Vista versus gaming on XP both in 32- and 64-bit modes. For this first look, however, we will be sticking with single card setups on Vista x86, Vista x64, and Windows XP x86. In the future, we plan on looking at multi-GPU performance as well as the performance of games on Windows XP x64. With Vista, Microsoft has improved the gaming on 64-bit landscape significantly, and we would like to see just how far we have come.

For now, we will be looking at a selection of cards from AMD and NVIDIA: five cards from the Radeon X1K series and five cards from the GeForce 7 series, as well as both current 8800 parts. These tests will look at GPU and CPU limited situations, and we will be comparing Vista x86 with Windows XP as well as Vista x64 to see where there are any differences. We will also look at resolution scaling on each of our three test operating systems, but only with two cards representing AMD and NVIDIA: the X1950 XTX and 8800 GTX.

In terms of APIs, one DirectX and one OpenGL game will be tested. Oblivion will represent the MS API, while Quake 4 will be showing off OpenGL performance on Vista. We have also taken a look at a native 64-bit game. Valve's Half-Life 2: Lost Coast will be run on all three operating systems in native mode. We would like to have compared HL2:LC running in WoW at 32-bit under x64, but we have not been able to figure out how to test it without running in 64-bit mode yet.

First up is Oblivion performance. DirectX performance should be as close as possible to Windows XP performance as this is Microsoft's baby. First, let's take a look at Vista x86 numbers divided by Windows XP scores for CPU limited and GPU limited cases. This will give us the speed up (numbers above one) or slow down (numbers less than one) as compared to Windows XP. Just remember that there is some normal fluctuation in performance on both sides, so we could see a wider margin of error here than in our standard comparisons.

For CPU bound tests, almost every card performs better under Windows Vista than under Windows XP; the lone exception is the X1900 XT 256MB. This indicates that Vista is better able to provide system resources to DirectX games, which is actually quite surprising considering the overhead that Vista adds to the system.

When we take a look at the GPU bound case, we see almost the opposite with only the 8800 GTS performing better than it does on Windows XP. This does line up with what we would expect. There is more involvement from the OS in the rendering pipeline and less direct access to the hardware by games. Vista is now able to manage graphics memory and graphics drivers must support sharing of hardware resources between multiple programs. Luckily, the differences aren't that huge. While the hardcore gamers won't be happy with any performance loss, Microsoft is betting that in the long term the advantages will outweigh the loss in framerate.

Now let's take a look at how Vista stacks up against XP in an x86 vs. x64 comparison

On the CPU limited results, most of the cards again run faster on Vista x64. This is frankly amazing, as even Microsoft expects performance to be slightly slower on Vista. In the GPU limited results, we see basically a random scattering of cards that are slightly slower or faster under Vista x64. Given that Oblivion is a 32-bit application running in WoW, we would be pretty happy with only small performance losses, and any performance improvements are unexpected but welcome. All in all, x64 performance looks good, and we haven't seen the types of compatibility and stability issues between the two that we did with XP x64.

Last up for Oblivion is resolution scaling. 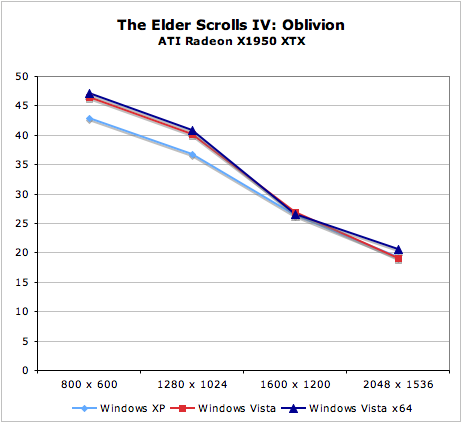 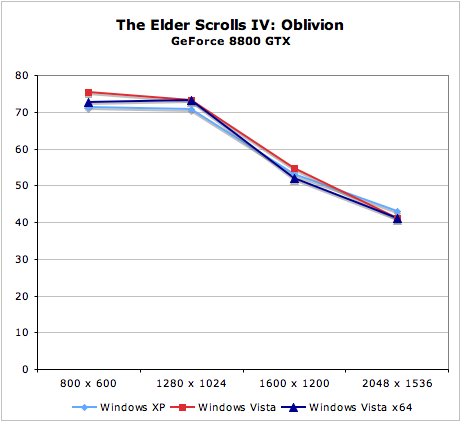 Both the 8800 GTX and X1950 XTX scale very similarly across platforms. There does seem to be more difference in CPU limited settings, while performance seems to converge as resolution increases.