Moving on to OpenGL and Quake 4, we'll be able to see how well NVIDIA and AMD have done in building their own OpenGL ICD (installable client driver) for the API. This is more taxing on hardware vendors, because Microsoft's implementation of OpenGL is just a wrapper around DirectX. By default, unless an ICD is used, OpenGL applications cannot talk directly to the hardware.

We did have some issues with Quake 4 as well. We were unable to get the application to run stable with multi-core support enabled, so we tested without this option. Even on Windows XP we see much higher numbers during CPU limited testing with this option enabled, but we will have to do without for a while. It isn't clear whether this is a problem with the game, with Vista, or with OpenGL, but hopefully it will be resolved (preferably sooner rather than later).

Now let's take a look at how Vista x64 compares. This will actually serve as a good test of how well NVIDIA and AMD have implemented their x86 and x64 versions of their OpenGL ICD as well.

Again, the low end AMD cards just look like they are doing better because they perform poorly in general. In CPU limited cases, x64 actually seems to perform better than under 32-bit Vista, and even GPU limited performance is very close between the Vista versions. This could indicate that AMD and NVIDIA's OpenGL ICDs benefit from 64-bit processing, even if the game itself does not. However, unlike Oblivion, the performance of Quake 4 in Windows Vista is substantially slower than under XP, sometimes as much as 30% slower.

Last up for Quake 4 is resolution scaling. 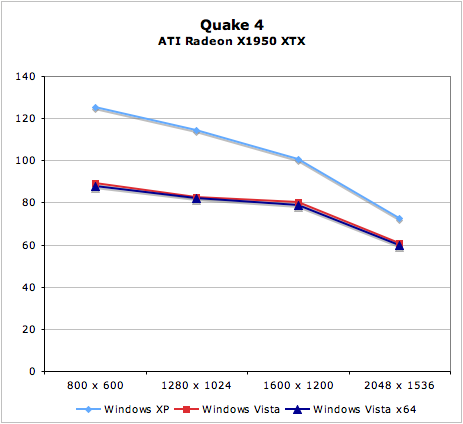 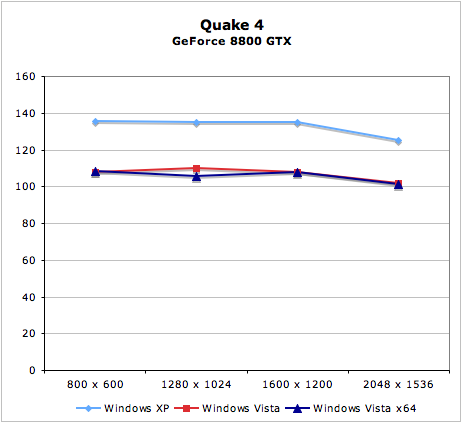 While it's very clear that XP is a better option for OpenGL apps right now, there are no real scaling surprises. The CPU performance/driver overhead seems to be a bigger factor in reduced Vista scores than the actual GPUs, as the scores tend to get closer in GPU limited situations.

Finally, we have Half-Life 2: Lost Coast with its native 64-bit application running under Vista x64. Is it worth it? We're only providing resolution scaling results for this game. 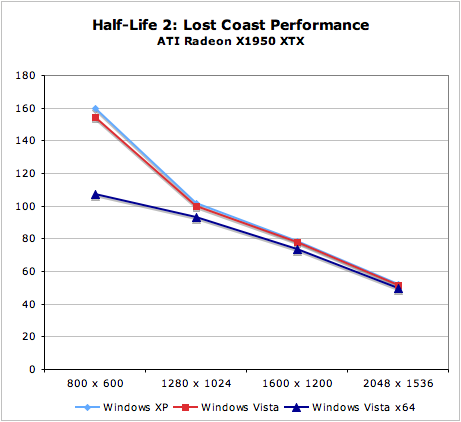 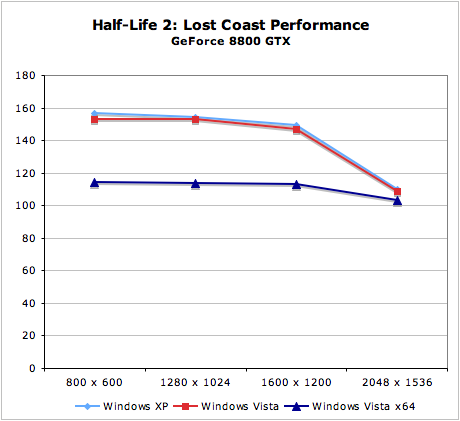 Clearly the 64-bit application runs slower than the 32-bit, especially at CPU limited resolutions. Even the games we tested running under WoW in 32-bit mode on Vista x64 showed better performance parity with Vista x86 and Windows XP. While the resources are there to offer better performance with more registers and better memory management (especially on systems with more than 4GB of RAM), there is clearly something that's lacking here. It is likely that Valve has more work to do on their 64-bit Source engine, but we can't rule out Vista x64 as a factor altogether.

We had hoped to see better performance from a native 64-bit game, but it looks like we'll have to wait longer until game developers figure out how to capitalize on the extra resources available under Vista x64 without adversely affecting performance.