Not everyone is prepared to pay $450 for the very best DDR2. Without comparing performance of lower-priced DDR2 it is also not possible to recommend whether high-performance DDR2 represents a good value for you. Looking at what was available in the market, we compiled a list of modules that appeared to be a representative cross-section of the 2GB kit value segment. With prices ranging from around $120 to $180 for a 2GB kit, these DDR2 modules are less than half the price of our high-performance selections.


The real question, of course, is where you can take these low-cost DDR DIMMs. We ran all the DIMMs at the highest DDR2 speeds and the fastest memory timings we could achieve on a standard Core 2 Duo test platform. The results were truly surprising.

A-Data is one of the largest memory application suppliers in the world and their Vitesta DDR2-533 kit performed extremely well in our testing from both a timing and voltage aspect. The quality of the heat spreaders and memory PCB is excellent.. 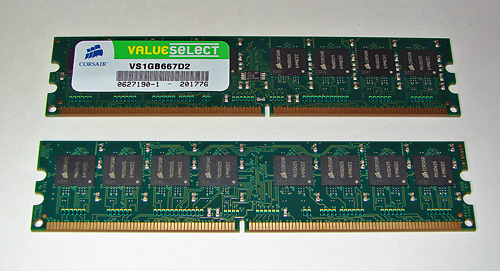 Corsair was able to provide us their ValueSelect 2GB kit. Although Corsair is mainly known for their XMS series of high performance memories they also provide a very good price to performance offering in their ValueSelect series. While the modules do not include any heat spreaders, we did not notice any thermal issues during our testing that required the use of higher voltages to reach our reported numbers.

Kingston also provided their Value memory series that performed well during testing with timings that basically matched that of the higher rated DDR2-667 modules, although voltages had to be increased above the group average. We did not notice any thermal issues with the memory due to the lack of heat spreaders or the increased voltages. Also note that this is the only 2GB Value kit that used Infineon chips instead of Elpida chips, which likely accounts for some of the slight differences.