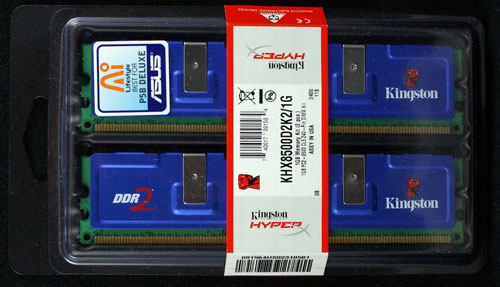 The Kingston Hyper X is a dynamite performer, and frankly it would have been a top recommendation except for the fact Kingston provided a 1GB kit instead of the 2GB kit we tested for every other brand in this Buying Guide. You might ask why this matters?

Smaller capacity DIMMs usually clock higher than higher capacity memory, so the fact Kingston matches our leader Mushkin at the top does not mean a Kingston 2GB kit would perform the same. When comparing memory performance make sure you compare the same size DIMMs if you want to be sure you are choosing the best. Still, the Kingston is an excellent performer, and the 1GB kit is just $226. If 1 GB is enough memory for you, this 1GB kit would be a great choice. 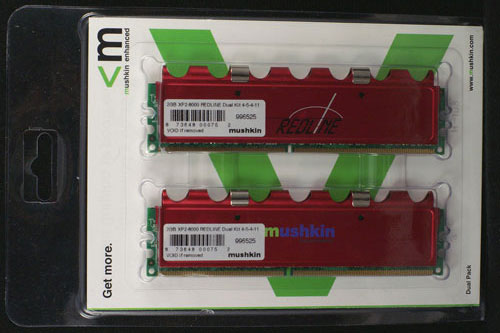 It has been a while since we have reviewed a Mushkin Redline kit, and we were certainly impressed when we looked at the last Mushkin Redline kit for DDR. The 2GB Mushkin Redline kit turned in the highest overclock we have seen with any DDR2 memory at 1116. Mushkin also managed to reach the timings of the best high-performance DDR2 tested in this roundup - but generally at a lower voltage than others here. This is a winning combination, and you will likely be very happy if you choose the Mushkin 2GB Redline kit for your new Core 2 Duo computer.

We gave OCZ the Gold Editors Choice award when we first tested this dynamite OCZ PC-2-8000 Platinum 2GB kit last March. The OCZ is still one of the best performers we have tested in DDR2 memory, but it now has some company from Corsair and Mushkin. If you want the best DDR2 you can buy, then one of these three will fit your needs.

It is no accident that all six of our high-performance memory kits for Core 2 Duo are based on Micron memory chips. Micron currently produces what are arguably the fastest DDR2 memory chips available. Using Micron memory chips is also the reason all six kits costs between $400 and $450 for the 2GB kit. Each manufacturer has their own binning (speed sorting) techniques, they choose or develop their PCB, and they also may have very unique customized SPD programming. Despite these differences, the performance of all six 2GB kits are more similar than not.

Three of the six memories stand out for better timings and/or lower voltages at each tested speed. The OCZ PC2-8000 Platinum EL has been highly praised in the past. It is now joined by the Corsair CM2X1024-8500C5 and the Mushkin Redline XP2-8000 as the top-performing DDR2 memory you can buy. Corsair, Mushkin, and OCZ have all three done an exemplary job in the manufacture of these 2GB kits.

In fairness the performance differences between any of these six kits is very small, and you can select any of the six based on the best pricing - confident you will get great performance from your new DDR2 memory. None of these memories come cheap, and many will find $400 to $450 for 2GB of DDR2 memory too much for their new Core 2 Duo system.

If you are in that group looking for value, you will want to take a close look at our test results with a group of seven value priced 2GB kits beginning on the next page. These 2GB kits, ranging from $117 to $170 for the 2GB kit, provide much better value on the Core 2 Duo platform than we first imagined. You will likely be pleasantly surprised at the performance you can get in this value DDR2 segment.