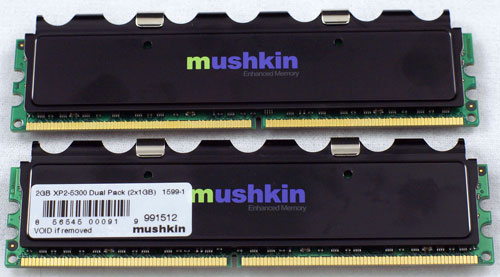 The Mushkin DDR2-667 memory arrived with the highest price in our value roundup, an excellent heat spreader design, but performed below average at the DDR2-667 and DDR2-800 settings. We raised the voltages but did not have any success in improving the timings at these settings. However, the Mushkin ran at stock voltages for the low latency DDR2-400 and DDR2-533 settings although the 3-3-3-8 timings at DDR2-533 could not be improved with additional voltage to match the 3-2-2-7 timings of other modules. Also, this is the only memory in our group that would not run 4-3-3 settings at DDR2-800. Although the performance difference is minimal, the cost of this kit indicates the memory should perform better. 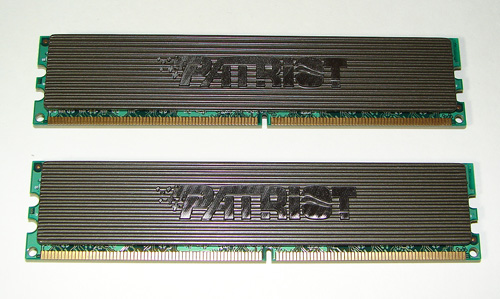 Patriot Memory provided their Extreme Performance series memory modules that provided above average performance at voltage settings that were more than acceptable for 24/7 operation. The memory comes with stylish heat spreaders and was able to easily clock up to DDR2-900 at extended voltages and 5-5-5-15 timings, though we recommend the lower latencies at DDR2-800. 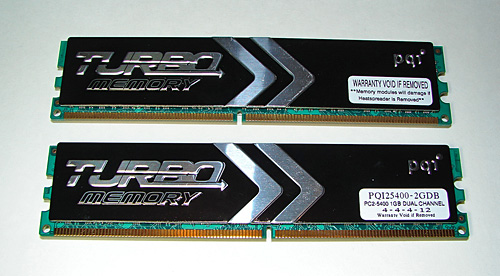 The bargain of the bunch has to be the PQI Turbo kit that is currently selling for around $117 with rebate. While the timing performance of the memory was excellent we had to run at voltages higher than the group's average to meet these settings. The base voltage for this particular model is 2.0V, something to be aware of based upon our results with the other memory modules.

The Wintec AMPX DDR2 Extreme series of memory was the pleasant surprise of the group as it generated excellent timings at low voltages at the lower memory speeds. It performed average at DDR2-800, although the results are more than acceptable.

All of the memory in the value section was able to run on average 4-3-3-9 settings at DDR2-800 except for the Mushkin modules that were limited to 4-4-4-12 but at a low 2.0V setting. The performance delta is extremely minor and the lower voltages are welcomed, but the Mushkin memory is the most expensive in our group so we naturally expect more from it.

The ability of all our value memory to run at very low latencies at DDR2-667 and 4-3-3-9 latencies at DDR2-800 is just incredible given the average price of $148 for a 2GB kit. Not even a year ago this type of performance in the DDR2 world would have placed this "value" memory at the top of performance charts. We found the Elpida memory to offer higher overclocks at lower memory voltages overall than the Infineon based modules, making it the current leader in value performance memory in our opinion.

The two modules that stood out were the A-Data Vitesta DDR2-533 and Wintec AMPX DDR2-667. During testing, both offered a unique combination of price, performance, and stability. All of the memory reviewed is more than acceptable for a Conroe system and the performance differences are so minor that we suggest choosing a supplier based upon prior experience, warranty, or price in this case. We will be looking at additional value memory modules from other suppliers shortly along with providing performance test results with our new Core 2 Duo Memory test platform.