Windows 2003 was configured with /3GB and /PAE switches in the boot.ini to support the 8GB of memory used for our tests. SQL Server Enterprise was set to use AWE extensions, and a maximum memory limit was set at 6144MB.

To measure power consumption of each system, we used an EXTECH Instruments Power Analyzer Model 380803. This power analyzer allows us to view current power consumption, and log the consumption at various intervals during a test to a text file. For this test, we used the same Power Supply for both systems, although we recorded the difference between a 750W power supply and a 550W power supply, and it was less than 3 Watts. We should note that the Raid Array was powered by a separate power supply that was not plugged into our analyzer, so we were measuring strictly bare system power consumption. If you’re curious, the Raid Array used about 98 Watts spun up, and averaged 110 Watts during the database tests.

Idle – To measure a system at idle, we booted each system into Windows and let it stabilize by watching the task manager in Windows and the Wattage readings. Once we were at a stable reading, we began recording for 100 iterations of our data logger (which logs every 2 seconds). We then took those numbers and averaged them to get the idle power reading.

50% – We used our database benchmark to measure a loaded system, by adjusting the thread count for the test to a level that produced a half loaded system. Then, we would run our database test for its duration while recording to the data logger. Finally, we averaged those results. 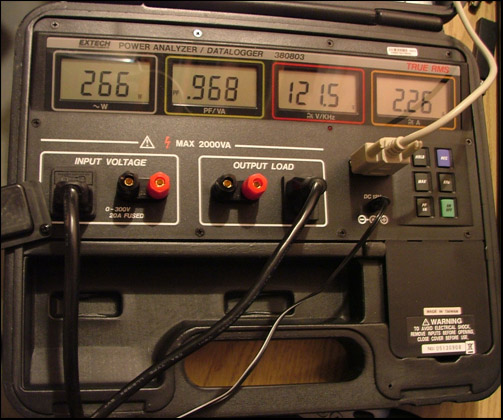