by Wesley Fink on September 7, 2005 12:05 AM EST
56 Comments | Add A Comment
56 Comments + Add A
Comment
Many have been looking forward to the arrival of the first ULi chipset retail motherboards since our review of the ULi Reference boards. In the first Reference board review and the updated second ULi Reference, we found uncompromised performance with both the PCIe and AGP 8X graphics slots. This is very good news for owners of high-end AGP 8X graphics cards, since for the first time they can buy a board that will run their AGP at full speed now, with provisions for a PCIe video card upgrade in the future. Since we have found no real performance difference in PCIe and AGP cards of the same type, the ULi M1695/M1567 chipset provides fresh new options for many end users. 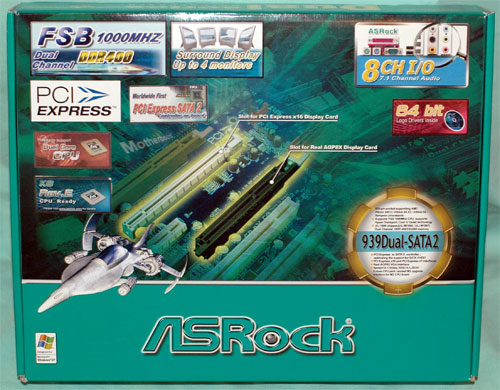 ASRock, the value line manufactured by Asus, has a long history with the ALi chipsets that were the forerunner of the current ULi chipsets, so it came as no surprise when ASRock was first to retail with the 939Dual-Sata2. Frankly, we really hoped to see a ULi board from Abit or another enthusiast brand (rather than a "value" brand) built around the ULi chipset. Some of these are coming, according to sources at ULi, but the shipping ASRock 939Dual-Sata2 is starting to appear in markets around the world. As you will see in our closer look, the ASRock is much better than we expected, and it adds a couple of features for the future that weren't even on the ULi Reference boards.