While we've roughly covered the specifications of the Snapdragon 865 and the new Exynos 990, what really matters is how the two chips compare in their performance and power efficiency. The Arm Cortex-A77 cores in the Snapdragon already had impressed quite a lot thanks to their microarchitectural advances, and Qualcomm’s implementation on TSMC’s N7P node beat our expectations in terms of power efficiency. Samsung’s 7LPP process node remains a wildcard, but we’ve already hinted in previous preview articles that the Exynos 990 and the M5 cores are very much lagging behind. Let’s take a deep dive into the performance detailed performance figures on SPEC2006 and dissect the microarchitectural characteristics of the two chips:

Starting off in SPECint2006, we’re already seeing some quite contrasting results between the two variants of the Galaxy S20. When it comes to performance, there’s a clear leadership on the part of the Snapdragon 865 with much larger generational improvements than what we see from the part of the Exynos 990 and its M5 cores.

What’s quite outstanding here for the Qualcomm chip is the energy efficiency improvements of the CPU. Arm notably had told us that the A77 CPU cores would improve performance in relation to the A76 cores by consuming more power – with energy efficiency between the two designs essentially being similar. That’s actually not what is happening here as the Snapdragon 865 not only uses less energy than its predecessor, but it outright uses less power as well.

I was quite perplexed by this, however there’s the difference of process nodes that might come into play. TSMC’s N7P process node might be quite a lot better than it’s N7 node, so it’s probably better to compare the generational CPU upgrades between the A76 and A77 cores when comparing the HiSilicon Kirin 990 5G, which is manufactured on the N7+ node. That chip indeed showcases better power efficiency when compared to the N7 Snapdragon 855 and Kirin 990 4G – an improvement of around 15% on average. In this comparison, the Snapdragon 865’s situation makes a lot more sense as it more closely matches the A77’s predictions.

429.mcf’s score on the Snapdragon 865 is excellent and shows a 68% improvement over the Snapdragon 855, showcasing the much-improved memory subsystem of Qualcomm’s new flagship.

The Exynos 990 also showcases good performance improvements, although less than what we see on the Snapdragon. One very weird result Is the score on 403.gcc where the new chip is actually slower than its predecessor. I did discover some weird compiler regressions, but even when using the same set, the new chip continued to be slower than its predecessor in this test, which is worrying.

What’s really bad though, is the power and energy consumption. Energy consumption is pretty much flat versus the Exynos 9820 – sometimes a bit better, sometimes a bit worse. The problem with this is that the power consumption has actually gone up by an equal amount to the performance improvements, which given a new microarchitecture and process node isn’t something what you want to see. Apple has shown that high power usage cores are usable in smartphones, but only as long as their performance is equally high, resulting in high energy efficiency for workloads. That doesn’t not seem to be the case for the Exynos 990 as its performance is lagging behind.

The results for SPECfp2006 also paint a similar picture. The Snapdragon 865 here performs excellently, showcasing some very large improvements in performance for some workloads, all whilst reducing the energy consumption in relation to the Snapdragon 855.

The Exynos 990 on the other hand continues to be mixed in its results. There are performance improvements here as well, but they come at a cost of much higher power consumption which in some cases outweigh the performance increases. Some tests such as 447.dealII and 470.lbm even see 30-40% energy efficiency regressions, which is extremely bad. 433.milc seems to really like the M5’s microarchitectural changes as it’s posting over double the performance of the M4 – while “only” increasing power by 50%.

Spec Performance Overview Across All Generations 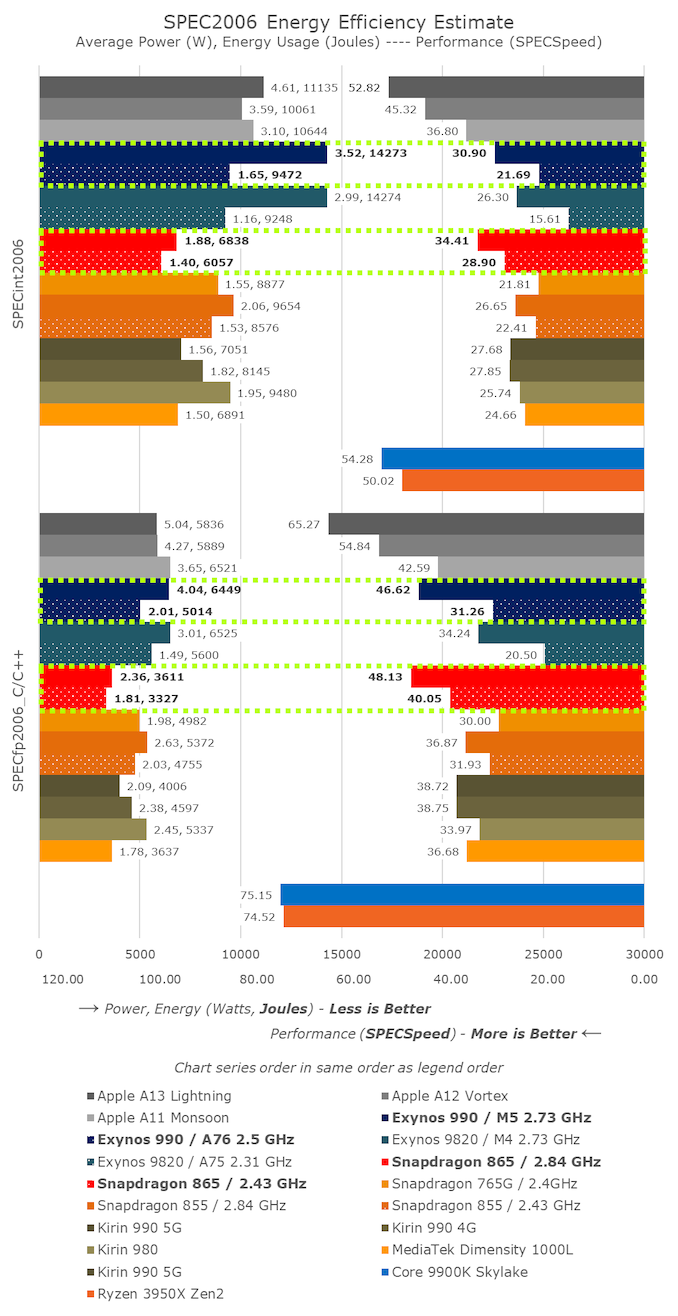 The performance differences aren’t that big an issue, the elephant in the room is the fact that the Exynos chip here requires double the energy to achieve slightly lower performance to its competitor. That’s massively disappointing and quite worrying for the Exynos 990 based Galaxy S20’s.

I had mentioned that the 7LPP process is quite a wildcard in the comparisons here. Luckily, I’ve been able to get my hands on a Snapdragon 765G, another SoC that’s manufactured on Samsung’s EUV process. It’s also quite a nice comparison as we’re able to compare that chip’s performance A76 cores at 2.4GHz to the middle A76 cores of the Exynos 990 which run at 2.5GHz. Performance and power between the two chips here pretty much match each other, and a clearly worse than other TSMC A76-based SoCs, especially the Kirin 990’s. The only conclusion here is that Samsung’s 7LPP node is quite behind TSMC’s N7/N7P/N7+ nodes when it comes to power efficiency – anywhere from 20 to 30%.

Unfortunately for Samsung LSI and the SARC design team, even if we accounted for such a process node difference, the M5 cores would still be far behind the A77 cores of the Snapdragon 865. Samsung’s CPU microarchitecture weaknesses are just too great, and the M5 just seemed a step sideways in terms of performance and efficiency improvements, still not fixing to what to me seemed like some obvious problems with the design. We don’t have public die shots of the S865 and E990 yet, but I’m willing to bet that the M5 cores end up at least 3x the size of the A77 designs. Together with the 2x efficiency disadvantage, and the 10% performance deficit, that’s a PPA disadvantage of 6-7x, which is just untenable. Samsung’s M6 core design was pretty much completed and said to be an SMT design, which again in my view just doesn’t make any sense whatsoever in the mobile space as it just goes against the notion of heterogenous CPU SoC designs that we have nowadays.

It’s always unfortunate to lose a CPU design team in the industry – but in my view it was inevitable given the direction things were going. Qualcomm had stopped their custom CPU efforts several years ago, with the Snapdragon 820 being the last such SoC with a fully custom microarchitecture. They had noted that their designs were quite far behind Arm’s Cortex cores when it came to efficiency, and that it was better to just use those in the mobile products, which ended up being quite the wise decision as the following Snapdragon SoC generations were all great. Meanwhile it feels like SLSI squandered 5 years in the SoC market with handicapped products that didn’t deliver on their goals, with the Exynos 9810 and now the Exynos 990 being quite the large disasters.

The silver lining here is that I expect future Exynos SoCs to be massively more competitive. Next year’s design should employ Arm’s Cortex-A78 cores, so expect roughly a 15% IPC improvement over the A77, and Samsung should be able to reach the 3GHz mark in terms of frequencies. Hopefully all that saved die space can be invested back into caches, maybe we’ll finally see an 8MB L3 to compete with Apple?

The Snapdragon 865 A77 cores look pretty amazing. Sure, there’s a still a performance gap to Apple’s A13 CPU cores, but the Arm cores are also significantly more efficient now- at least closing the gap with Apple on that metric. Arm is now heavily invested in designing larger high-performance cores, being now supported by all the Arm server and hyperscale vendors. Expectations are big for the new Arm v9 generation of microarchitectures in 2022, the roadmap of which probably also played a large factor into Samsung’s custom CPU development cancellation.

Finally, Samsung Foundry here clearly is at least a year or more behind TSMC in terms of process technology. Unfortunately, we don’t know how that side of the formula will play out – but I expect TSMC to dominate Samsung in terms of 5nm density, I just hope that the power efficiency differences won’t be as drastic.