Not all motherboards are created equal. On the face of it, they should all perform the same and differ only in the functionality they provide - however, this is not the case. The obvious pointers are power consumption, but also the ability for the manufacturer to optimize USB speed, audio quality (based on audio codec), POST time and latency. This can come down to the manufacturing process and prowess, so these are tested.

Power consumption was tested on the system while in a single ASUS GTX 980 GPU configuration with a wall meter connected to the Thermaltake 1200W power supply. This power supply has ~75% efficiency > 50W, and 90%+ efficiency at 250W, suitable for both idle and multi-GPU loading. This method of power reading allows us to compare the power management of the UEFI and the board to supply components with power under load, and includes typical PSU losses due to efficiency. These are the real-world values that consumers may expect from a typical system (minus the monitor) using this motherboard.

While this method for power measurement may not be ideal, and you feel these numbers are not representative due to the high wattage power supply being used (we use the same PSU to remain consistent over a series of reviews, and the fact that some boards on our testbed get tested with three or four high powered GPUs), the important point to take away is the relationship between the numbers. These boards are all under the same conditions, and thus the differences between them should be easy to spot.

In our power consumption testing, the ASUS ROG Zenith II Extreme has noticeably higher power consumption in all three tests. This can be attributed to the LiveDash OLED panel, as well as multiple premium controllers and componentry on board. At full load, the power is more reasonable with a total power consumption of 361 W, which is 10 W more than the ASRock TRX40 Taichi, and 17 W than the MSI Creator TRX40. 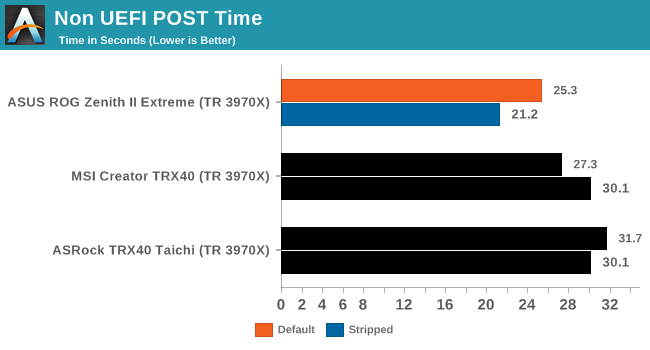 We test the DPC at the default settings straight from the box, and the ASUS ROG Zenith II Extreme did well with a latency time of 145.4 ms. The best we've seen on the TRX40 models we have tested so far.