It’s a bit ironic that the most recent GPU architecture in the Acer Nitro 5 is the one that is not used, since the Ryzen CPU offers Vega graphics, but despite the dGPU being Polaris 11 based, it still offers far more GPU performance than you can get out of the integrated GPU. 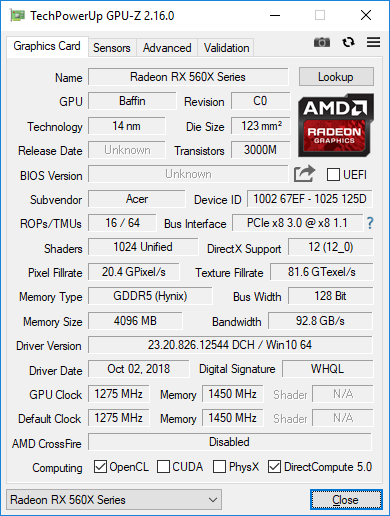 The AMD Radeon RX 560X offers 16 CUs, which translates into 1024 Stream Processors, and is coupled with 64 texture units and 16 ROPs. AMD offers both 2 GB and 4 GB models of this laptop card, but despite this being a budget system, Acer has gone with 4 GB of GDDR5, attached via a 128-bit bus. It’s based on Global Foundries 14nm process.

The Intel version of this laptop comes with an NVIDIA GTX 1050, or a 1050 Ti on the highest-end models. So for comparison the Dell XPS 15 9560 is included which came with the GTX 1050. The MSI GT75 Titan is included only because it is the only other device which has been tested on the latest games in our suite. If you’d like to compare the Acer Nitro 5 against any other system we have tested, please check out our online Bench.

It’s also worth pointing out that the Acer Nitro 5 is pretty limited in terms of resolutions the panel supports. Although 1920x1080 is great for desktop, demanding games may make use of a slightly lower resolution such as 1600x900, but that is not available as an option on this laptop. It only offers 1920x1080 and 1280x720 as 16:9 resolutions, so for our gaming tests we were limited to our Value and Enthusiast settings, but some games play better than others. Civ VI, for example, would only run at 1920x1080 in fullscreen mode, but Shadow of Mordor and Shadow of War render at a % of the native resolution, so they work fine regardless.

UL Benchmark’s 3DMark offers several tests, with Fire Strike being the most complex, and Ice Storm Unlimited being a test that you can run on smartphones and tablets. As the scenes get less complex, the CPU performance becomes more of a bottleneck than the GPU, and that is apparent here. With Fire Strike, the Acer Nitro 5 trades blows with the GTX 1050 in the XPS 15, but as the scenes get less complex, it fades back. It still offers far more performance than the Vega 10 in the Acer Swift 3, but the gap shrinks from being 413% the performance of Vega 10 on Fire Strike, down to *only* 157% the performance on Ice Storm. Luckily most games are more GPU demanding than Ice Storm would be.

The latest GFXBench offers new DX12 based tests, which are a big step up over the OpenGL based tests from GFXBench 4.0. AMD tends to do well on DX12, and it does do very well here as well. It’s well over any integrated GPU, offering well over double the performance of the Vega 10, which itself is almost twice as fast as Intel’s UHD 620.

Dota offers a wide enough range of options that it can be run pretty well on even integrated graphics, assuming you’re OK with turning down the detail and resolution. It does tend to be more CPU bound than many other games though. At our Enthusiast settings, the game averaged just over 60 FPS, which is far higher than iGPUs. But thanks to the more powerful CPU in the Dell XPS 15, it managed 50% quicker yet.

Unfortunately this game would only detect the display at 1920x1080, which means if you are going to play Civ VI on this device, you'll have to do it with the settings turned down a bit. Luckily, this isn't a game that requires very high framerates to play.

As a DX12 title, AMD does much better here, offering similar performance to the GTX 1050 again. It is more or less dead even between the two GPUs.

The latest in the Tomb Raider franchise is much more demanding, and although we only have a couple of devices tested with it, it looks like it will be one that will stick with us for a long time, since even a GTX 1080 only achieves 92 FPS on our Enthusiast settings. The game is certainly playable on value on the Acer Nitro 5, but it is running into its limits here.

We’re including some of our older titles here both because this is an entry-level gaming system, and because we have a lot of data for these tests, and Bioshock is one that can still be demanding to laptops. The Nitro 5 performs very well in our Value results, but struggles a bit on the Enthusiast settings. What would likely be the sweet spot would be our 1600x900 Mainstream test, but as indicated above, this laptop doesn’t offer that resolution.

The RX 560X can easily run this game, assuming the settings are turned down. It does still struggle at 1920x1080 Ultra though, so some tweaking would be needed.

The latest version of the game is even more demanding, and here the Nitro 5 runs it well at Value, but would struggle with much more demand than that.

Codemasters offers a pretty wide range of performance with their racing sim engine, and the Acer Nitro 5 can play it pretty well.

Ubisoft’s Far Cry franchise is one of their most successful, but the performance required is a bit more than the Acer can handle. The game is playable, albeit barely, at our value settings.

This is the first laptop we’ve seen with a discrete AMD GPU in a long time. Not only is this great for competition, but the performance of the Polaris based RX 560X showed that it can hang with NVIDIA's widely-used GTX 1050. AMD’s work on what was originally Mantle has translated through into great showings in DX12 games, although the system can still struggle a bit in DX11. Most entry level gaming laptops are also going to offer a 45-Watt H series Intel CPU, so the pairing with AMD’s U series Ryzen is also holding it back somewhat. Luckily AMD has just announced their own H series, so this gap should be filled in the near future.