The A12 SoC in the iPhone XSs showcased some fantastic results with some extremely high scores. We expect the iPhone XR to perform just as well – the only unknown factor here is the thermal designs of the two phones.

The iPhone XR actually differs quite a lot in this regard to its XS siblings: The iPhone XS and XS Max employ a “sandwiched PCB” motherboard design, in which the SoC lies between two substrates. While I don’t have empirical data on this, I just have to assume that such a design is not helpful for actually dissipating heat away from the SoC to the body of the phone. 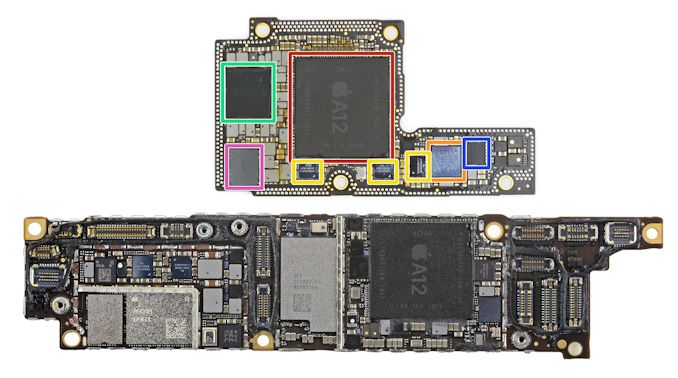 The iPhone XR on the other hand employs more of a traditional single PCB design, such as found in past iPhone models. The SoC here is found inside an EM shield facing towards the screen assembly. I was always questioning this a design as well because theoretically there should be a slight air gap between it and the display backplane which could hinder heat transfer. Also because the SoC is facing towards the display, it also doesn’t make direct contact with the aluminium frame of the phone. As Apple’s SoC’s become ever more power hungry at their peak performance states, it is weird to see that Apple hasn’t been any more aggressive in their thermal dissipation solutions as say what we now commonly see from some higher-end Android counter-parts. 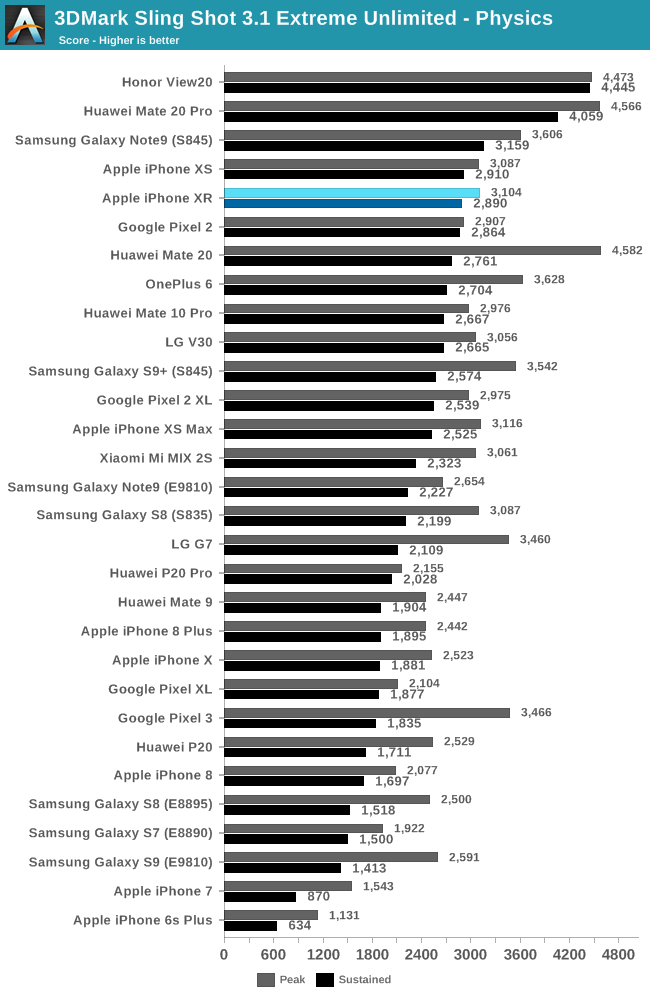 Starting off with the physics subtest, which is mainly a CPU test within a (GPU) thermally constrained scenario, we see the iPhone XR perform nearly equally to the iPhone XS, showcasing some very good sustained performance near the peak levels of the SoC. 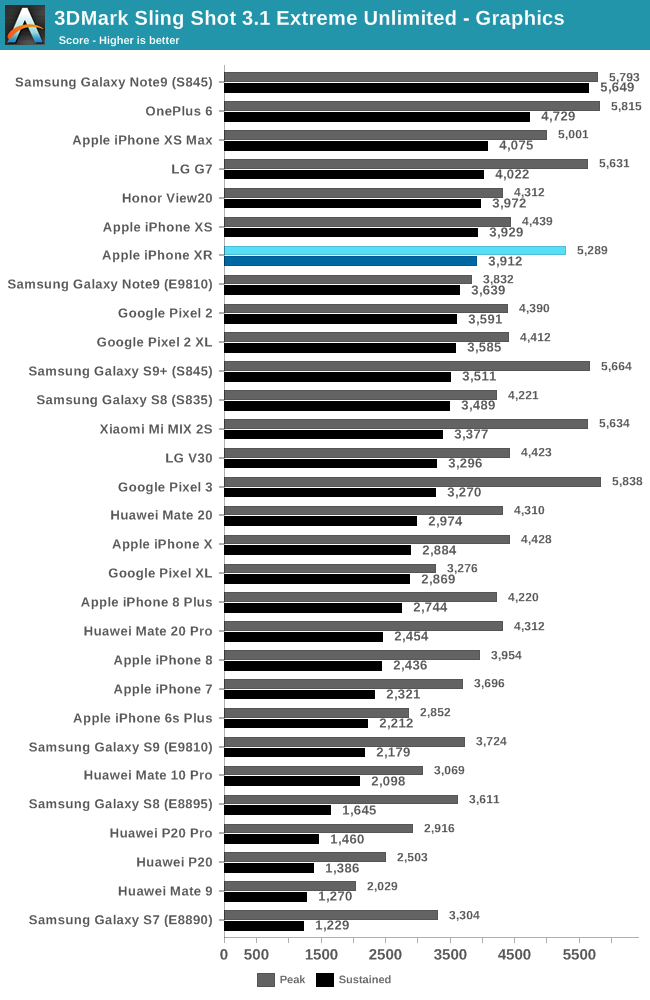 The graphics subtest of 3DMark also doesn’t seem to drastically differ from the iPhone XS. This was one of the tests that caused problems for the XS variants as it would cause the phones to crash the GPU at peak performance, only able to complete the test when the phones were warmer and throttled more. I re-tested the XS and did manage to somehow complete a run at a higher peak performance state, however my iPhone XS Max still managed to crash with the same behaviour as back in October.

Moving onto the GFXBench suite, starting off with the two variants of the new Aztec sub-test, which represents a more modern 3D workloads: 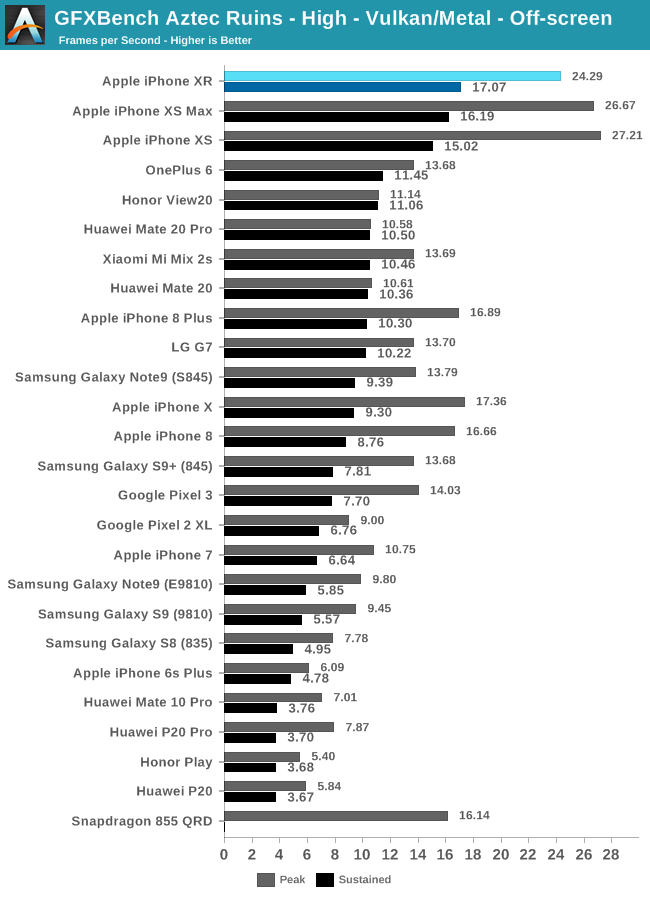 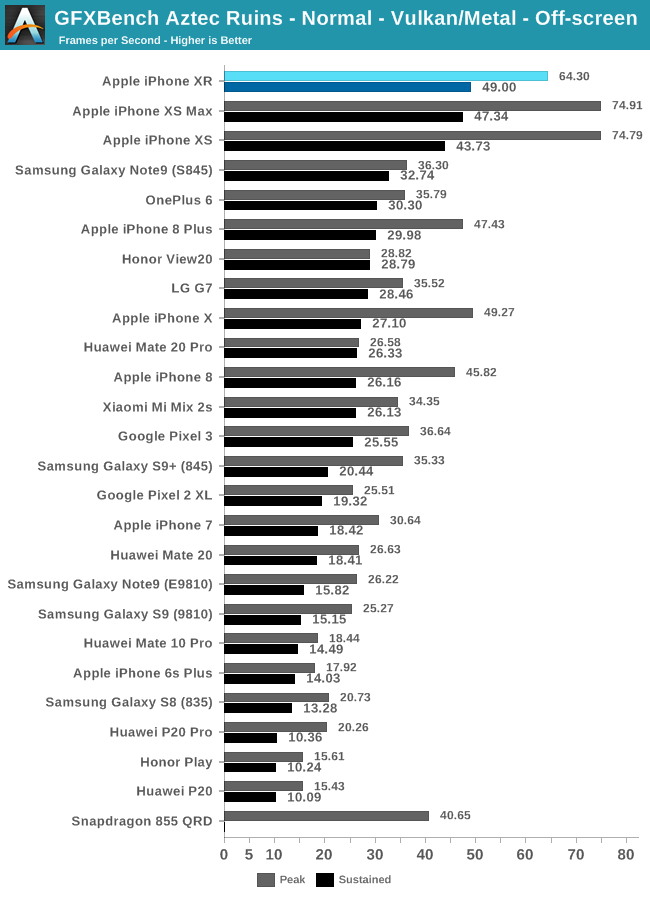 The iPhone XR performed extremely well in these two tests, however we do note that there’s a difference in the peak performance showcased by the XR and the XS variants: It seems that Apple might be running the GPU at a slightly lower frequency here. This would match the slight difference in the peak 3DMark graphics score as well, and could be the reason why the iPhone XR didn’t crash in the same way the XS did. 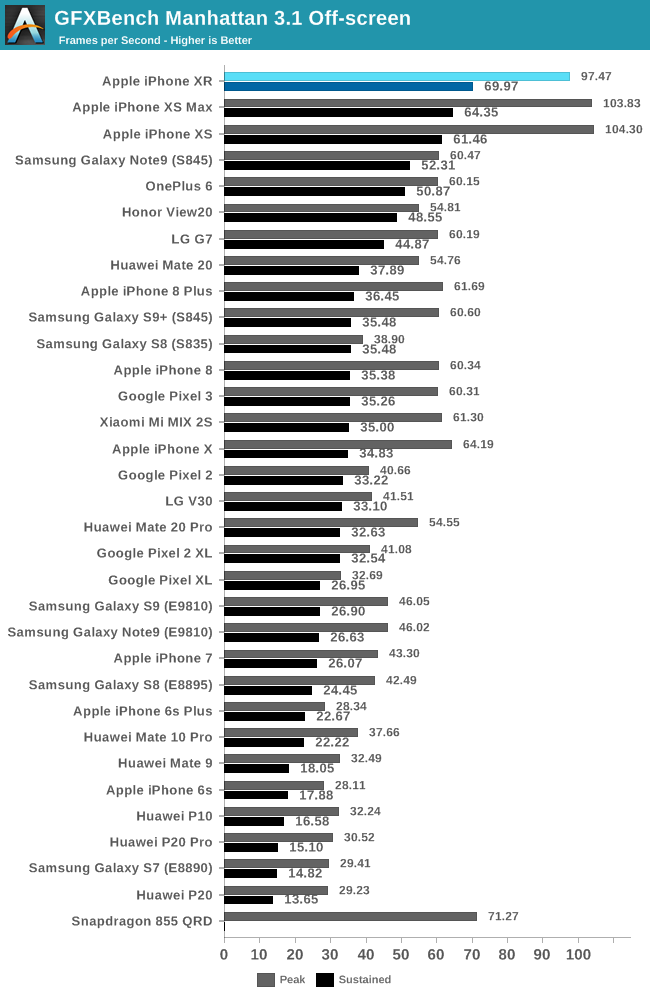 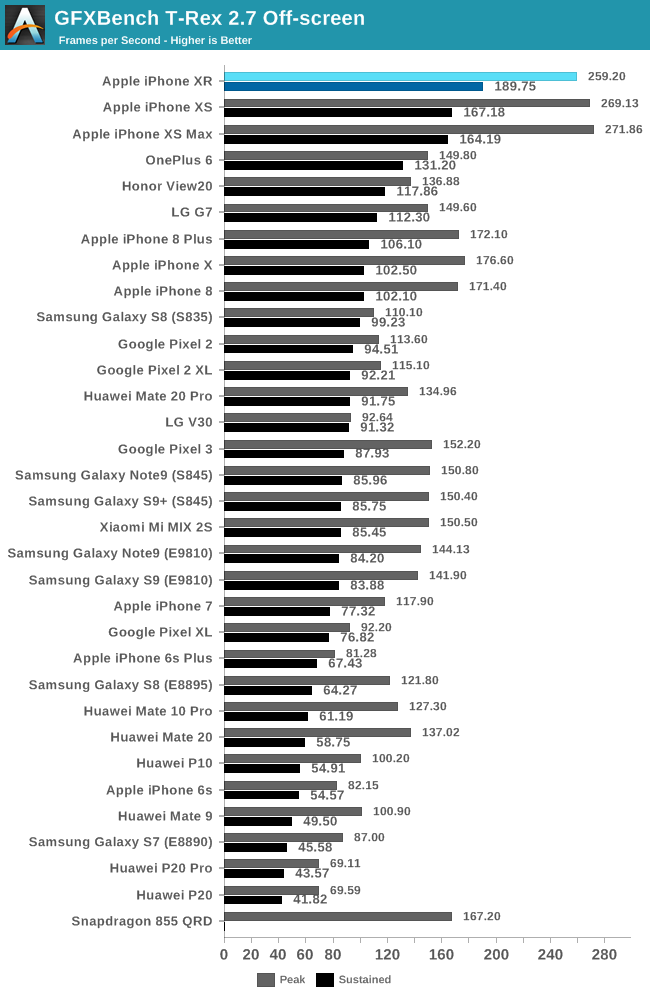 In the Manhattan 3.1 and T-Rex offscreen tests we see similar behaviour: the peak performance of the XR is slightly lower than that of the XS phones, however the sustained scores are higher.

One of the reason we use off-screen scores in our benchmark suite is that it allows for an apples-to-apples workload comparison across all devices. While in most cases this is a good and representative scenario for what you might expect from the thermals in actual games, this actually doesn’t seem to apply for the iPhone XR:

Because of the relatively low screen resolution on the part of the XR’s display – a sub-FHD 1792×828 – I’ve had a lot of trouble actually getting workloads to push the A12's GPU to its peak frequencies in on-screen scenarios. This causes an interesting dilemma for the iPhone XR: It has absolutely abundant GPU performance that won’t be used any-time soon. As game developers on iOS will be targeting and tuning their workloads to run smoothly on the most demanding devices of a generation, it means that games will most likely be setting their baseline as the higher-end iPhone XS Max, which has to push over twice the pixel resolution. The net result is that for any given 60fps graphics workload, the iPhone XR will run cooler and with a longer battery life than what you would experience on the XS or XS Max.

If gaming and gaming performance (and battery efficiency) is important for you, then the iPhone XR is definitely the phone to get. Not only does it deliver class-leading performance, but it also will be quite future proof in terms of performance thanks to the lower-resolution display.