The burst QD1 sequential read performance of the Intel Optane SSD 900P falls in between the Samsung 960 PRO and 960 EVO. Samsung's fastest outperforms the Optane SSD by about 11%. 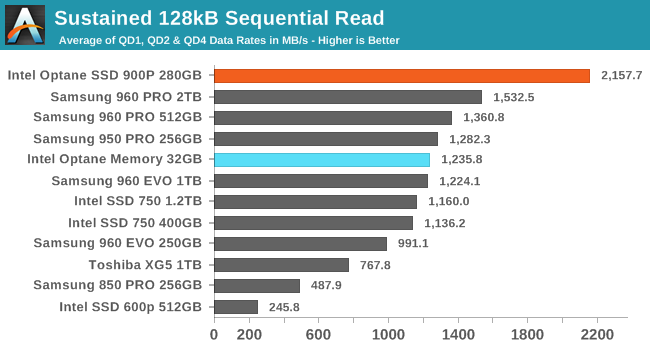 On the longer test of sequential read performance, the Optane SSD holds on to a commanding lead after the flash-based SSDs mostly slow down relative to their burst performance.

Both Optane devices show a jump in performance from QD1 to QD2, after which their performance holds steady. Samsung's 960s show very minor performance increases with queue depth, and at the highest queue depths the Intel SSD 750 comes closest to catching up to the Optane SSD.

Samsung's 960 PRO and EVO drives all outperform the Intel Optane SSD 900P on the burst sequential write test, by up to 16%. 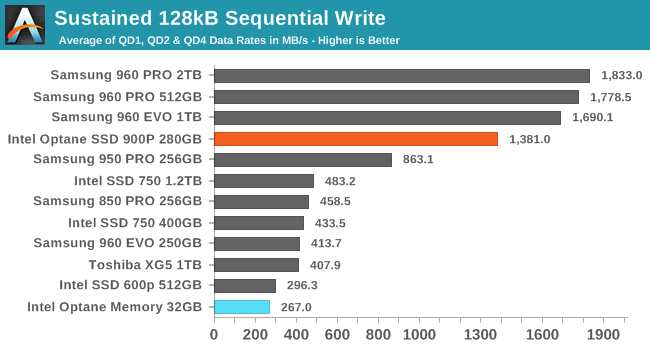 On the longer sequential write test, the Optane SSD loses ground to Samsung's three fastest SSDs but everything else slows down even more.

Almost all of the SSDs in this bunch reach their full sequential write speed at QD2, and they are mostly differentiated by their speeds once saturated. A few drives show some unevenness during the later portions of the test, but the Optane SSD has just a minor blip in its favor at the end of the test.