From an architectural standpoint, AMD’s engineers consider the Vega architecture to be their most sweeping architectural change in five years. And looking over everything that has been added to the architecture, it’s easy to see why. In terms of core graphics/compute features, Vega introduces more than any other iteration of GCN before it.

Speaking of GCN, before getting too deep here, it’s interesting to note that at least publicly, AMD is shying away from the Graphics Core Next name. GCN doesn’t appear anywhere in AMD’s whitepaper, while in programmers’ documents such as the shader ISA, the name is still present. But at least for the purposes of public discussion, rather than using the term GCN 5, AMD is consistently calling it the Vega architecture. Though make no mistake, this is still very much GCN, so AMD’s basic GPU execution model remains.

So what does Vega bring to the table? Back in January we got what has turned out to be a fairly extensive high-level overview of Vega’s main architectural improvements. In a nutshell, Vega is:

The interesting thing is that even with this significant number of changes, the Vega ISA is not a complete departure from the GCN4 ISA. AMD has added a number of new instructions – mostly for FP16 operations – along with some additional instructions that they expect to improve performance for video processing and some 8-bit integer operations, but nothing that radically upends Vega from earlier ISAs. So in terms of compute, Vega is still very comparable to Polaris and Fiji in terms of how data moves through the GPU. 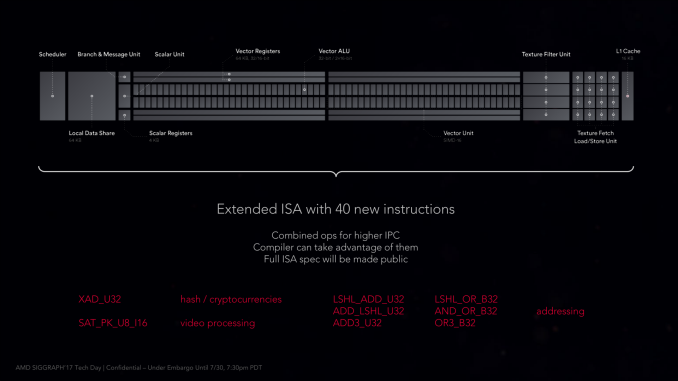 Consequently, the burning question I think many will ask is if the effective compute IPC is significantly higher than Fiji, and the answer is no. AMD has actually taken significant pains to keep the throughput latency of a CU at 4 cycles (4 stages deep), however strictly speaking, existing code isn’t going to run any faster on Vega than earlier architectures. In order to wring the most out of Vega’s new CUs, you need to take advantage of the new compute features. Note that this doesn’t mean that compilers can’t take advantage of them on their own, but especially with the datatype matters, it’s important that code be designed for lower precision datatypes to begin with.