As Broadwell is a tick - a die shrink of an existing architecture, rather than a new architecture - so you should expect modest IPC improvements. Most Xeon E5 v4 SKUs have slightly lower clockspeeds compared to their Haswell v3 brethren, so overall the single threaded performance has hardly improved. Clock for clock, Intel tells us that their simulation tools show that Broadwell delivers about 5% better performance per clock in non-AVX2 traces. 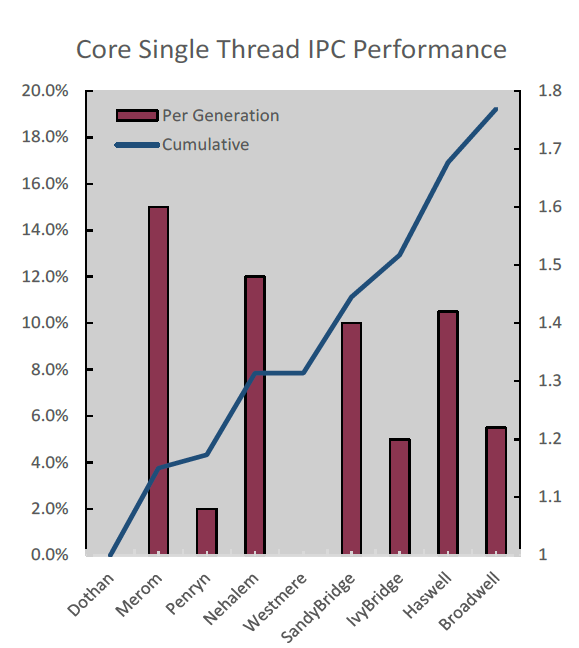 In that sense, Broadwell is basically a Haswell made on Intel's 14nm second generation tri-gate transistor process. Intel did make a few subtle improvements to the micro-architecture:

Compared to Haswell-EP, Broadwell-EP also includes some new features. The first one is the improved power control unit.

On Haswell, one AVX instruction on one core forced all cores on the same socket to slow down their clockspeed by around 2 to 4 speed bins (-200,-400 MHz) for at least 1 ms, as AVX has a higher power requirement that reduces how much a CPU can turbo. On Broadwell, only the cores that run AVX code will be reducing their clockspeed, allowing the other cores to run at higher speeds.

The other performance feature is the vastly improved PCLMULQDQ (carry-less multiplication) instruction: throughput has been doubled, and latency reduced from 7 cycles to 5.

This increases AES (symmetric) encryption performance by 20-25%, and CRCs (Cyclic Redundancy check) are up to 90% faster. Broadwell also has some new ADCX/ADOX instructions to speed up asymmetric encryption algorithms such as the popular RSA. These improvements are implemented in OpenSSL 1.0.2-beta3. But don't expect too much from it.. The compute intensive asymetric encryption is mostly used to initiate a secure connection. Most modern web applications keep their sessions "alive", and as a result, events that require asymmetric encryption happen a lot less frequentely . Symmetric encryption (like AES) which is used to send encrypted data is a lot lighter, so even on a fully encrypted website with long encrypted data streams, encryption is only a small percentage (<5%) of the total computing load.