The Intel NUC6i5SYK has been in the market since late last year, and we were really excited to finally receive a review sample last month. The NUCs have become one of the most promising desktop PC segments for Intel, and Skylake definitely has the necessary features to drive up the performance per watt metric. With full PCIe 3.0 x4 capability for the M.2 SSD and cutting-edge DDR4 support, the Skylake NUC has piqued the interest of the enthusiasts too. Getting more of the good things out of the way - the Skylake-U platform (Sunrise Point-LP chipset) also brings support for SDXC 3.0, enabling a dedicated UHS-I SDXC card reader slot in the Skylake NUC. The full-sized HDMI port addresses one of the major complaints we have had about the NUCs up to now. We are quite happy with the evolutionary updates made in the Skylake NUC.

The thermal design continues to be good, and the default BIOS configuration ensures that the Core i5-6260U can sustain higher operational power levels than what is suggested by its TDP of 15W. This is particularly interesting, since the processor doesn't officially have a configurable higher TDP. The Skylake GPU has also shown tremendous improvement compared to Broadwell and previous generations, and this is evident in the 3D benchmarks. The NUC6i5SYK also sports an Iris GPU with 64MB of eDRAM that helps improve performance for various workloads.

The pricing ($386 on Amazon for the barebones version) is also very reasonable for the performance numbers. With DDR4 SODIMM prices on the way down, and a Samsung 950 Pro 256 GB costing around $180, it is possible to complete the build for less than $650. 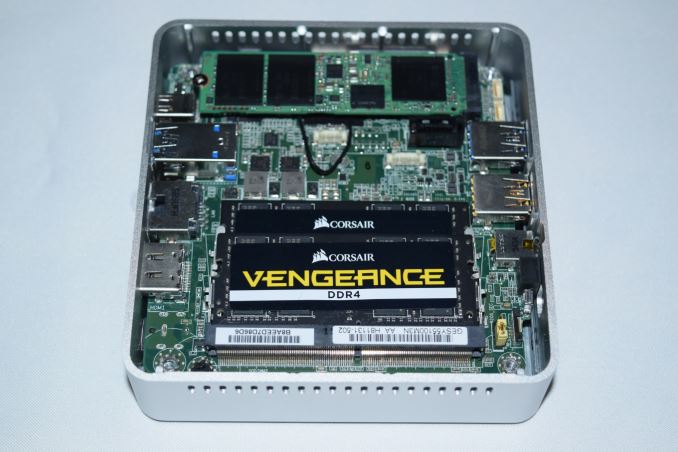 Unfortunately, at the business end of the review, we have to say that the Skylake NUC6i5SYK is not ready for prime time yet. In our evaluation process, we encountered two showstopper issues, one of which ended up in our first review sample getting bricked. In Intel's defense, they were already aware of the issues prior to our report.

BIOS version 0036 has a fix for the first problem problem, but the default settings in that BIOS are still incompatible with SODIMMs using Hynix memory modules. The latest GPU driver downloaded from Intel's site resolves the second issue. However, the nagging problem with the AC8260 WLAN adapter (occassionally missing 5 GHz SSIDs) still remains.

Other minor drawbacks (applicable to Skylake as a whole) include the absence of full hardware acceleration for HEVC Main10 decode as well as the absence of HDMI 2.0a / HDCP 2.2 support. Even though the hardware is quite powerful, these two aspects prevent us from recommending it as a primary HTPC. Broadwell NUCs are more mature and can provide very similar HTPC functionality at a lower price point.

Overall, our experience with the NUC6i5SYK was not what we have come to expect from a typical Intel product. Unless one wants to be an adventurous beta tester, we would suggest waiting for Intel to resolve all pending issues with the Skylake NUC before contemplating a purchase. Hopefully, the Iris Pro-equipped Skull Canyon NUC (with Thunderbolt 3 integrated) will fare better when it comes to the market.

Update (May 17, 2016): Intel has been releasing BIOS updates regularly since this review was posted. From the review changelog and follow-up testing, it appears that BIOS v0044 has resolved almost all of the issues that we have complained about in this review.