The power consumption of the NUC6i5SYK at the wall was measured with a 1080p display being driven through the HDMI port. In the graphs below, we compare the idle and load power of the Intel NUC6i5SYK with other low power PCs evaluated before. For load power consumption, we ran Furmark 1.12.0 and Prime95 v27.9 together. While the idle power number is consistent with a system sporting a 15W TDP processor, the load power is quite high at 38.37W (considering that the Haswell-based NUCs idled a full 10W lower while also using a 15W TDP processor). 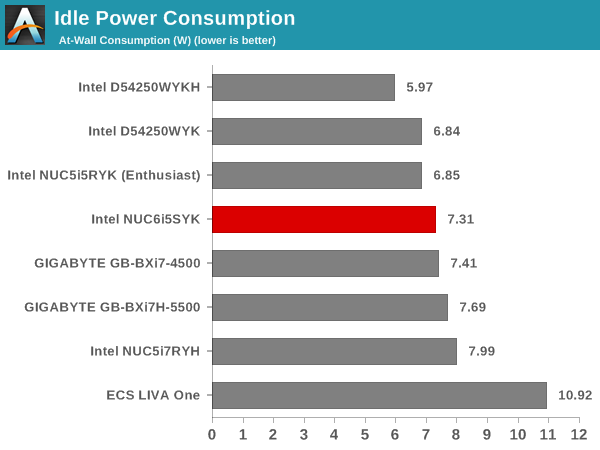 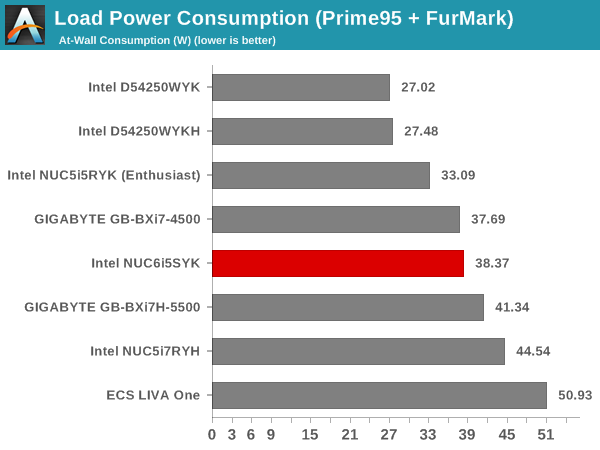 Analyzing the AIDA64 system report and the default BIOS configuration revealed that the unit was optimized for maximum performance. The long duration CPU power limit was set to 23W for a time duration window of 96s and the short duration CPU power limit was set to 30W for 2.44ms. For comparison, the Core i7-6600U in the Surface Book has a long duration CPU limit of 15W for 28s and a short duration limit of 25W for 2.44ms. As we shall see further down in this section, the Core i5-6260U in the NUC6i5SYK doesn't pull back significantly from the 23W limit even under sustained load (despite the 96s configuration). 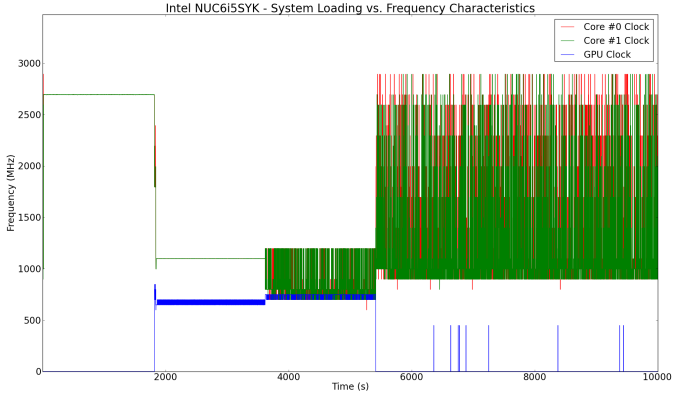 We find that the cores spend very little time at the turbo speed of 2.9 GHz, but the steady clock rate is around 2.6 GHz throughout the duration when the CPU was completely loaded. The Core i5-6260U is advertised with a base clock of only 1.8 GHz. There is no throttling at play here even under full CPU load. However, when the GPU gets loaded , the cores drop down to around 1.1 GHz even under load. As we shall see further down, this is probably limited by package power. The GPU cores have a base frequency of 300 MHz (turbo to 950 MHz). Under load, we see it operate between 600 - 700 MHz depending on whether the CPU is loaded simultaneously or not. 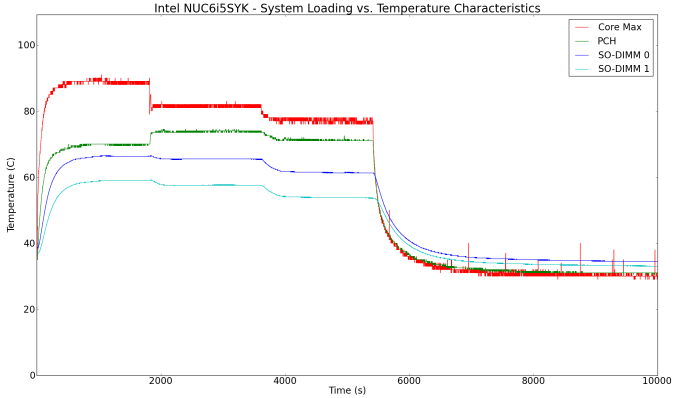 According to the official specifications, the junction temperature of the Core i5-6260U is 100C. The thermal solution is more than good enough to maintain the temperature below 90C even under extreme stress. The cores also idle around 33C.

In addition to the frequencies and temperature, we also tracked the power consumption at the wall during the thermal stress testing process. Here, we find that the performance of the system is actually limited by the maximum sustained power consumption limit (around 38W under the tested load conditions) for the system. Irrespective of the CPU and GPU loading, the power consumption is kept under these limits (except for the short spike close to 48W corresponding to the Short Duration Power Limit reported by CPUID). 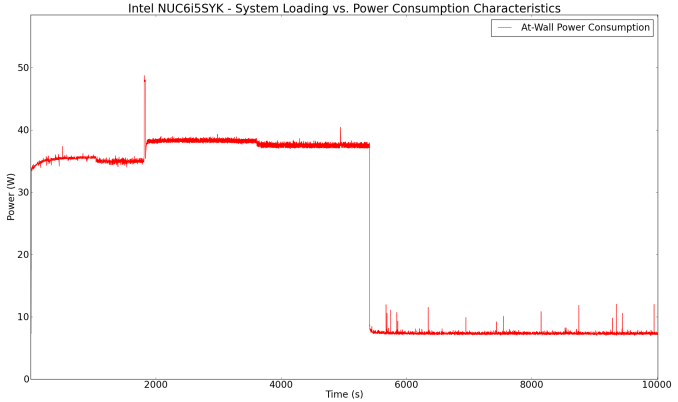 Since the NUC6i5SYK is not a passively cooled PC, we decided to skip our usual thermal photographs. Given the observed internal temperatures during thermal stress testing and the thermal design (case with adequate number of vents, a blower solution and a plastic lid), we believe that the external case temperatures will not be a cause for concern even under heavy system load.